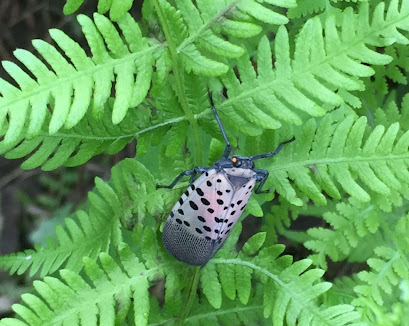 Most people by now have heard of the spotted lanternfly, an insect native to China, Vietnam and parts of India that somehow showed up in eastern Pennsylvania in 2014. A leaf hopper with distinctive markings and colorful wings, it spread rapidly as it sucked the juices out of grape vines, orchards, and trees like Ailanthus, black walnut, maple and red oak. 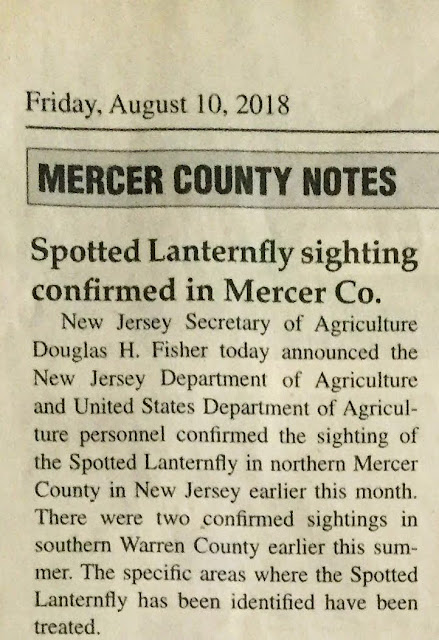 Two years ago, local papers reported a sighting of spotted lanternfly in northeastern Princeton. Last year, the summer of 2019, a couple friends reported seeing it in Princeton--Mimi found a few in her backyard in western Princeton; Scott saw some in Herrontown Woods near the parking lot. 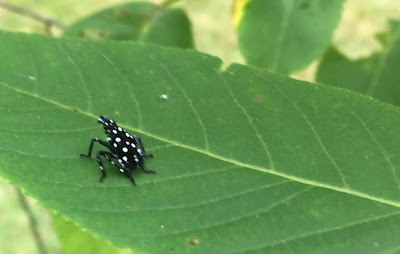 For me, it didn't become real until I encountered this curiously tilted nymph on a butternut tree leaf near Veblen House in Herrontown Woods in early July. A Penn State Extension post describes the insect's colorful development from egg to nymph to the winged adults that emerge in late July.
For some reason, I had avoided writing about the spotted lanternfly. Maybe I was maxed out on the world's problems, and didn't really want to delve into the prospect of yet another introduced insect wreaking environmental havoc. 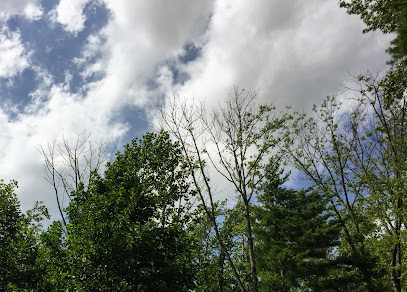 Unlike the Emerald ash borer, which has gone largely unseen as it skeletonizes our vistas, quietly killing every untreated ash tree in Princeton, 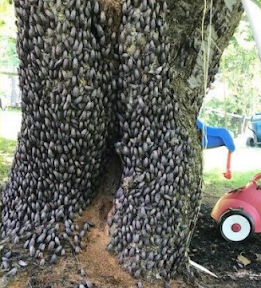 the spotted lanternfly sounded poised to make a highly visible and messy invasion. The PA Dept. of Agriculture published a pdf with graphic photos showing mildewed foliage and tree trunks covered with the adult insects. And because plant juice is very dilute, the sucking insects need to move a lot of juice through their bodies to get the nutrition they need. That means that both nymphs and adults expel large amounts of "honeydew", which drops down from the trees and vines, and coats foliage on the ground with sugary liquid, promoting the growth of mold. Their egg cases look like mud, affixed to trees or cars or most anything. It sounded like our habitat restorations and garden beautifications would be reduced to a tattered, moldy mess.
Below are compiled some research and experiences with spotted lanternfly this past weekend at Herrontown Woods.
Ailanthus--the Spotted Lanternfly's favorite food
Turns out that the spotted lanternfly has a strong preference for sucking the juices of Tree of Heaven (Ailanthus altissima). Native to China, Ailanthus is fairly common in Princeton and can be invasive, forming clones and sprouting aggressively from its roots if cut down. A stand of Ailanthus can be used for trapping the spotted lanternfly. Penn State extension offers tips for homeowners on this. 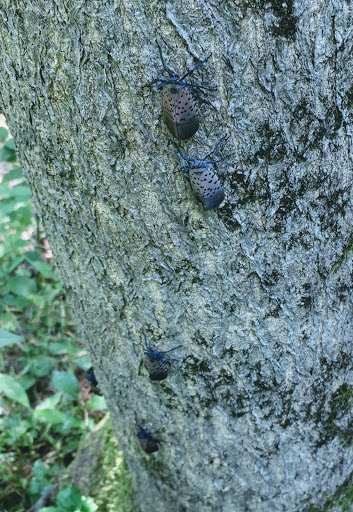 At the Herrontown Woods botanical garden, next to the parking lot, we have an Ailanthus growing, and sure enough, some adult lanternflies were found clinging to its bark. 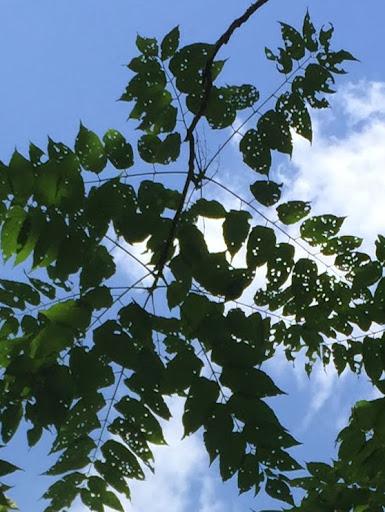 Looking up, the Ailanthus leaves appear to be getting eaten, though the lanternflies are said only to suck from the trunk and the stems, not the thinner tissue of the leaves themselves.
In a sense, the preference for Ailanthus is good news. An invasive tree is being attacked by a newly introduced insect from a similar region of the world. But the tree is also helping the insect expand its numbers through the summer, and toxic compounds in Ailanthus, when ingested by the lanternfly, may confer some protection from predators. 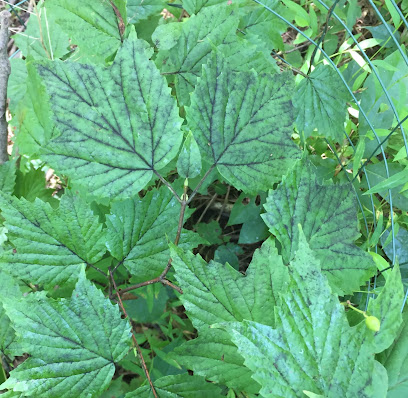 The lanternfly's honeydew is causing sooty mold to grow on the plants underneath the tree.  The NJ Dept. of Agriculture info sheet reports that the sap dripping from "weeping wounds" on tree trunks can attract stinging insects.
Probably the best thing to do is to take down the Ailanthus, using techniques described here.
More advice for homeowners
There's an enjoyable and clever article on various tactics on the MercerMe site. For instance, the adults are very quick to jump if you try to squash them. The article says their reflexes slow down with persistent efforts, however. Will test that next time.
Utilizing more finesse is a trap a Pennsylvania teenager came up with after watching the lanternflies climbing the trunks of trees. She ringed the tree with tin foil to channel the ascending insects into a bag, where they would die within 24 hours. Another thorough read for homeowners is at this link, including a test to see if chickens would eat them. They didn't, 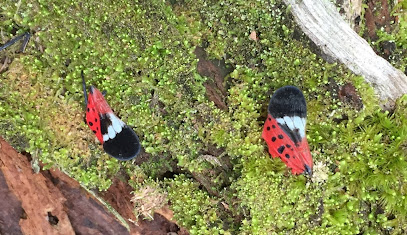 but something is clearly eating them, as these wings at Herrontown Woods show.
Longterm prognosis
Will the spotted lanternfly prove to be a longterm calamity, like the Emerald ash borer, or fade into the background as a passing problem? Will it be a lasting plague for vineyards and apple orchards? An article reports that few lanternflies were seen this year in the area of Pennsylvania where it was first discovered five years prior.  Local Princeton arborist Bob Wells is quoted in the Town Topics as saying that though vineyards and apple growers have reason for concern, for homeowners the insect "won't be much of a threat at all." I inquired on a listserve that includes land managers in Pennsylvania who have had the insect around for several years now, and got mixed responses. One observed reduced numbers one year, then a rebound the next. 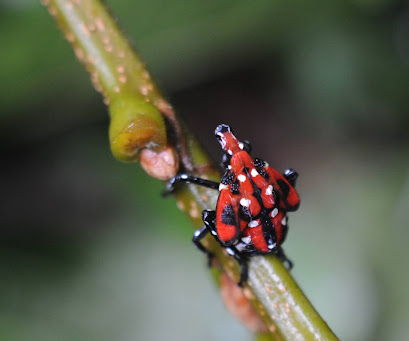 It can be hard to know if you have spotted lanternfly in your trees. My friend LisaB, who lives near Herrontown Woods, had a couple black oaks fall near her property in late July, and was surprised to find numerous SLF nymphs on the leaves that until then had been elevated 70 feet above the ground. She had seen none in her yard up to that point. Her photos show the last nymph stage (red), 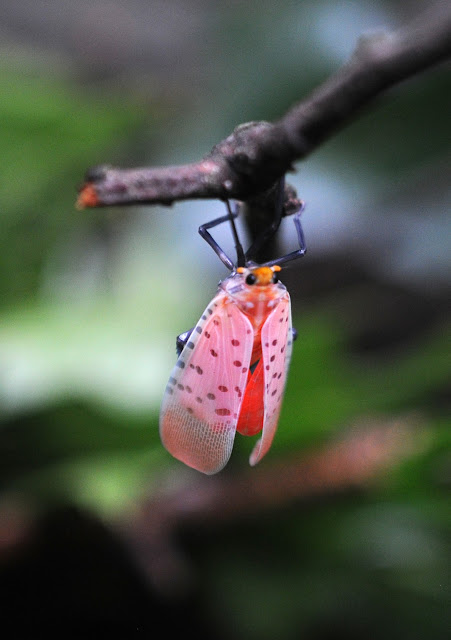 and a beautifully captured example of what a newly formed adult looks like. Documented in past posts on this blog, insects like cicadas, butterflies, and apparently spotted lanternflies as well, must hang down as they unfurl their new wings. If the wings brush up against any obstruction, they can easily become misshapened.
Update, Aug. 6: Walking through Quarry Park, closer to downtown, I noticed some Ailanthus trees near Spruce Circle,  looked up at the leaves above, and saw them there as well, a few scattered adults sucking juice from the rachis of the compound leaves. Will the spotted lanternfly be background or foreground, a quiet addition or serious pest? Time will tell.
In the meantime, it looks like removing Ailanthus trees would be the most straightforward way to limit this new arrival's numbers and impact. 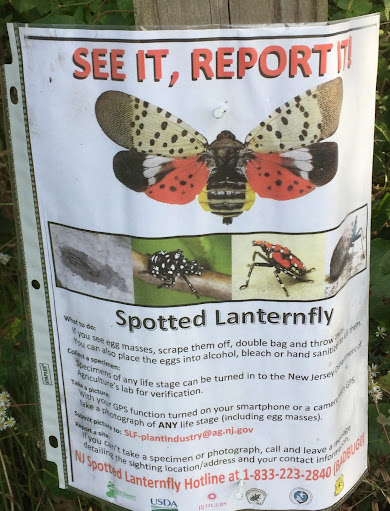 Reporting: I tried reporting the Herrontown Woods and Quarry Park sightings. The email address bounced, and the telephone number is always busy. It may be that the state doesn't want to hear about sightings in counties where the insect is already present, or maybe it's so widespread by now that the information isn't helpful. 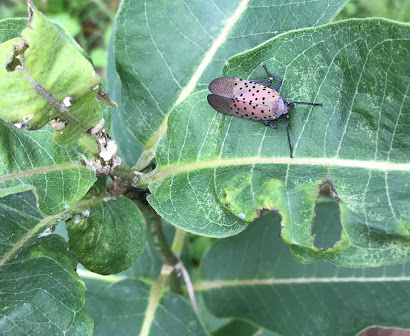 Does milkweed kill lanternflies?
On the leaves of common milkweed growing near our Ailanthus tree, I found several lanternflies belly up or immobilized, leading to speculation that the insects sucked juices from the milkweed and died from the toxins therein. Apparently, as an introduced species, they have yet to evolve an aversion to the plant.
Posted by Stephen Hiltner at Wednesday, August 05, 2020