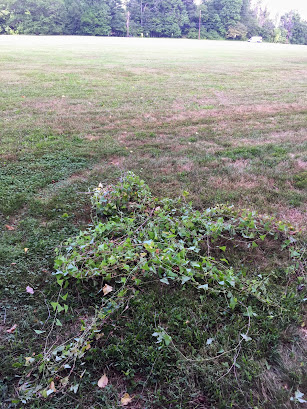 Each year I conduct a solo campaign to keep the highly invasive weed Mile-a-Minute out of Princeton. It's a prickly annual vine that grows each year from berries produced the year before. Knock it out before it produces berries, and eventually there will be no berries to sprout. Otherwise, the infestation will grow and birds will spread the berries across all of Princeton, to spring up in backyards and vex homeowners with its thorns and rampant growth.
I know of two infestations--one at the Princeton Battlefield, the other down off West Drive on the gravel road to Rogers Refuge. Yesterday, passing by Princeton Battlefield, I stopped to uproot what Mile-a-Minute I could find and leave it on the lawn to dry in the sun. Like most annual plants, it has whimpy roots and can easily be pulled, wearing a good pair of gloves. 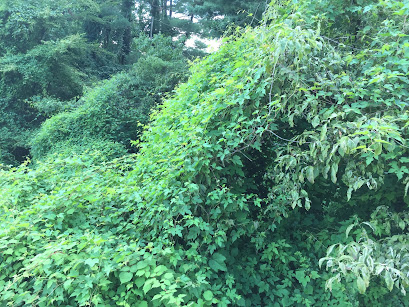 Princeton Battlefield has a remarkable history, which makes it all the more remarkable how ahistoric the landscaping is. Non-native turf is surrounded by giant kudzu-like topiaries of non-native porcelainberry vine growing over the native dogwoods that were proudly planted for the 1976 bicentennial. There's little hint of what the Clark Farm looked like on that fateful day in January of 1777. The lack of botanical context doesn't fit with the people and era the Battlefield is meant to celebrate. Plants were important to George Washington and other leaders of his time. They were farmers. It's not coincidence that the United States Botanic Garden was built to stand next to the U.S. Capitol building. What grew upon the land mattered back then. They didn't mow the lawn and think their work done.
Seeing a landscape so invaded and out of balance, I sometimes imagine a hospital with no doctors or nurses, only custodians dedicated to keeping the place clean. The patients are on their own, unless a volunteer doctor happens by to treat some localized infection. That's the situation in the vast majority of our landscapes, cared for by custodians armed with raucous mowers and leaf blowers, oblivious to the complexities of nature and its needs.
In the meantime, I pull the Mile-a-Minute, trim back some small portion of the porcelainberry vines so the dogwoods might live another year, and wonder at the world's disconnect with nature.
The two photos show 1) porcelainberry vines overwhelming a dogwood tree, and 2) another sea of porcelainberry in which only the similarly invasive Canada thistle can manage to lift its pink flowers above the swarm. 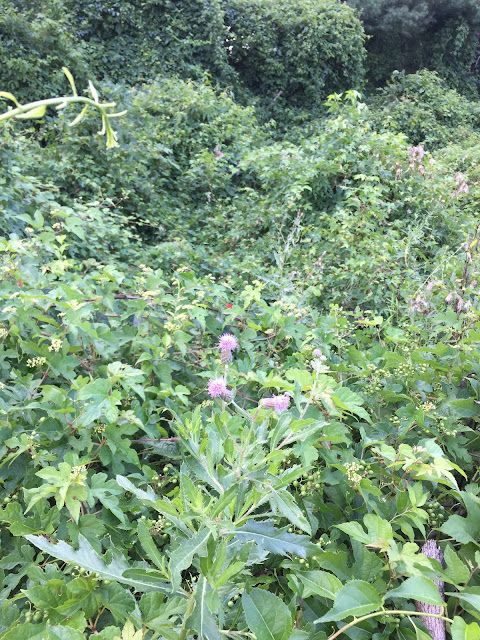