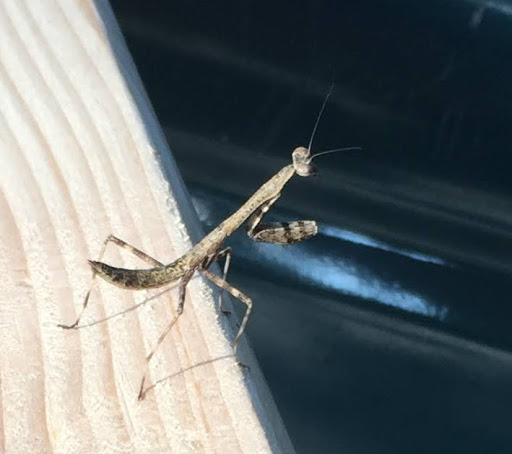 Hard to believe it's taken this long in my life to see a native praying mantis. Most of the ones we see are native to China--a realization not unlike learning that honey bees were brought here from Europe.
As with the spider that frightened Miss Muffet away, this praying mantis dropped from above, from the low-hanging branch of a red oak that I had disturbed while shifting a board into position for cutting. The board was destined to become part of a new stairway into the basement at Veblen house--a project that was now delayed while I took photos of the praying mantis. It stood firmly planted on the board, its four back legs forming a quadripod while it rocked left, then right, holding its poses like a Balinese dancer.
There are other examples of native species that go unseen, having been so thoroughly displaced by an introduced species that you wonder if the native still exists. Native bittersweet and native Phragmitis come to mind. 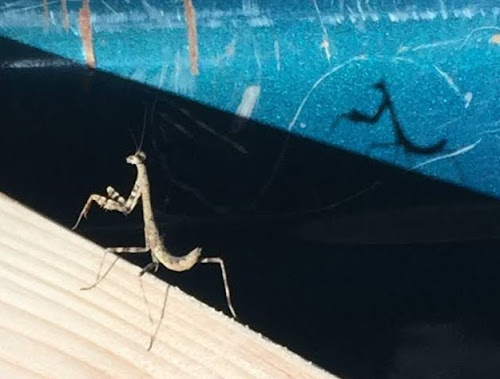 If there were any lingering doubt about this native praying mantis's existence, I could take heart in the thought that shadows don't lie. Come to think of it, the tradition of shadow puppets is Balinese as well.
An internet search shows that there are three types of praying mantis most likely to be found in our area, the Chinese species being the most common. There's a European species as well, and then the native, the Carolina mantis.

Five days prior, while rejoicing in all the pollinating insects attracted to flowers at our botanical garden at Herrontown Woods, I took a closer look at a wildflower and noticed another creature similarly drawn to the scene, but with a motive different from my own. 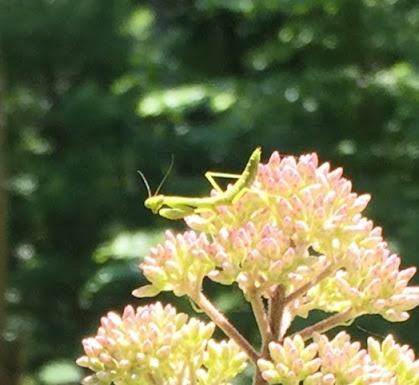 This was likely the Chinese species, waiting patiently atop a Joe Pye Weed bloom.
There are two contradictory beliefs that people hold in their heads, well separated lest they collide. One is that praying mantises are good because they eat harmful insects. That's was certainly true when a praying mantis visited my desk to snare an annoying housefly. The other belief is that pollinating insects are important for ecological health and agricultural abundance. The reality is that praying mantises chow down on pollinators, including butterflies. Whether the relatively abundant Chinese mantis is doing more harm than good is hard to say, but worth asking.
Cannibalism in praying mantises:
Female praying mantises are known to sometimes eat males during and after mating. For instance, they may pluck the male's head off while in the act--it being a body part the male really isn't using at that particularly moment--then polish off their partner in the afterglow of the tryst. What male, motivated by a desire to see its genes passed along to the next generation, would not give its body gladly to nourish the female's manufacture of eggs? More on this noteworthy behavior in a Univeristy of Michigan post about the native mantis, Stagmomantis carolina, and a NatureNotes post on mating mantids in a Princeton meadow.
Posted by Steve Hiltner at Thursday, August 13, 2020