Driving into Princeton the morning after Hurricane Ida swept through, my first thought was to check Princeton High School. Had the school flooded yet again, ruining the performing arts stage for a third time? Fortunately not, judging from appearances as I peered in the windows.

My next thought was the towpath along the DR Canal. Ten years ago, almost to the day, Hurricane Irene rendered the popular towpath almost unusable for walking, jogging, and biking, eroding it in places, coating its cinder surface with mud in others. Full repair, probably with FEMA money, was not completed until 2019--eight years later. 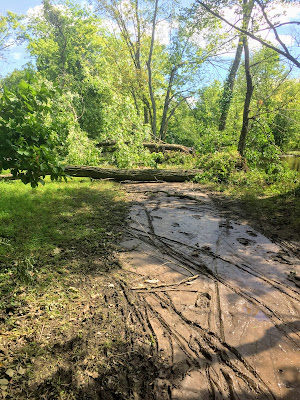 This is what I found after Hurricane Ida. A combination of fallen trees and thick mud have rendered sections of the towpath impassible, only two years after it was resurfaced. 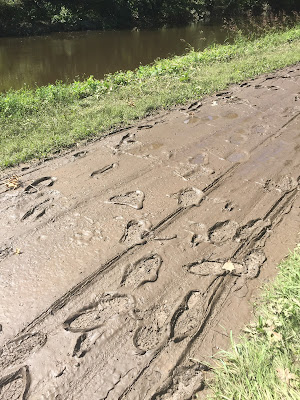 Here's a closeup of the flood's deposits of silt that walkers and bikers encountered. 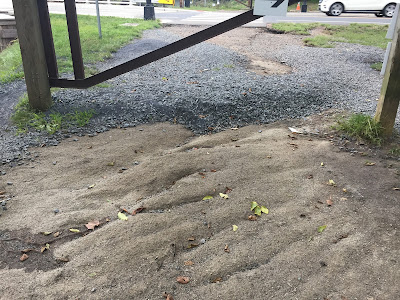 While some areas were covered in mud, others were scoured, stripped of the cinder surface that made for a comfortable walk. 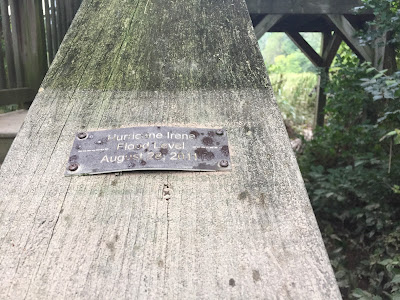 At Rogers Refuge, the hidden floodplain preserve upstream of Carnegie Lake, a plaque marking the high water mark ten years ago was exceeded by an inch by Hurricane Ida.
Elsewhere in Princeton, Mountain Lakes reportedly sustained damage to its bridges. In Herrontown Woods, the trails remained in good condition, but the power of the rain and runoff was evident in the widespread scouring of ground and the flattened vegetation.
As our machines pour more CO2 into the air, the warmed atmosphere can hold more water, leading to rains that are extraordinary in their density and weight. The raising of CO2 levels by 50% represents a militarization of the atmosphere, where clouds can now carry tremendously heavy payloads of water.
The need to build and maintain more and better waterbars to divert runoff from trails--a local form of "climate resilience"--is only adding to the workload faced by the largely volunteer organizations that care for Princeton's open space. More than a decade ago, working on habitat restoration at Mountain Lakes, I began thinking of climate change as a dark cloud on the horizon threatening to cast a shadow over our work in local preserves. The incredibly heavy rains are one example of how what once was foreboding has become a reality.
Of course, one reason so little is being done about climate change is that the episodes of extreme weather quickly pass, segueing often into pleasant weather. Hurricane Ida seemed to sweep away the hot, humid summer, leaving in its wake refreshingly cool air.
This hurricane's most lasting legacy may be a change in our relationship to water, perhaps the beginning of a retreat from the shorelines we so dearly love. The plight and uncertain future of the towpath--that wonderful waterfront trail--is only the most dramatic example of how a climate of our own collective making is beginning to threaten that which we hold dear.
Past posts about Hurricane Irene's damage in 2011:
Towpath Seeks Mule Team After Flood

Repairing the Towpath and Nature Along the D-R Canal
Posted by Steve Hiltner at Wednesday, September 08, 2021