It was in southern Michigan that I first fell in love with prairie and savanna habitats, and so a favorite place to visit, when in Ann Arbor for a gig, is the Children's Wet Meadow Project in Buhr Park. There was a time when tall grass prairies extended into southern Michigan, with stately bur oaks sometimes rising above to create savannas. The persistent grass stems and oak leaves would invite what I call "mildfires" to sweep through, recycling nutrients and creating a clean slate for the next year's growth. And so some of these wet meadows are burned annually by professionals, while neighborhood families gather some distance back to enjoy this controlled, elegant horticultural show that speaks to a wild past. Kids then scatter wildflower seeds in the ashes. 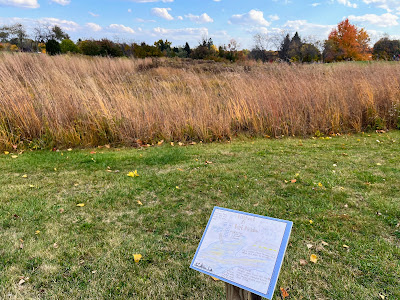 The story of the wet meadows, now in their 25th year, grows out of the transformative relationship between one woman, Jeannine Palms, and the park that serendipitously stretched beyond her backyard.
I've written about it in other posts, about how her love of people, plants, and the local Mallett's Creek spurred a community initiative to turn turfgrass into native grassland. Since Jeannine ran a daycare for many years, this has very much been a kid-powered project, as can be seen during workdays and in the signs that explain how the meadows filter runoff headed for the creek. 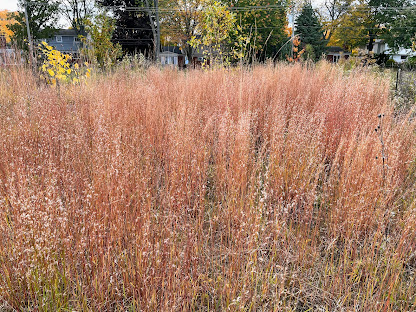 A favorite prairie grass is little bluestem. It's always seemed like fall colors of prairie grasses are more vivid in the midwest. Perhaps a colder climate plays a role? The most brilliant example is Indian grass, whose bright orange and yellow mimic the flames that sometimes consume it. Milkweed, anyone? Common milkweed spreads underground. A mildfire clears away the dead stems without harming the roots. 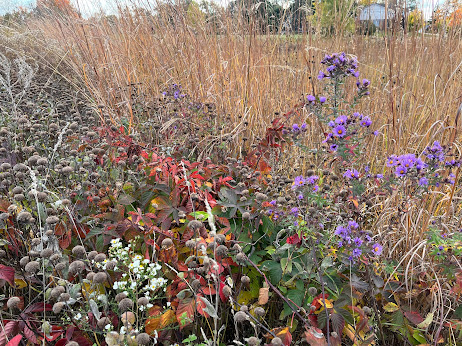 Dead stems can be as beautiful as the flowers. New England aster, wild bergamot, and the red leaves of blackberry mix with Indian grass. 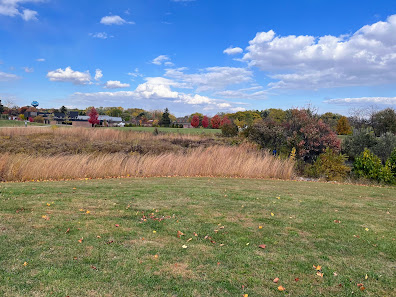 After planting many wet meadows, the Wet Meadow Project began creating a food forest, to the right in this photo, with trees bearing apples, cherries and pawpaws, a grape arbor, raspberries, and many other edibles.
Though a native meadow can be low-maintenance, it still requires ongoing vigilance to pull invasive species before they get established. A food forest, too, is only as good as the care it receives. 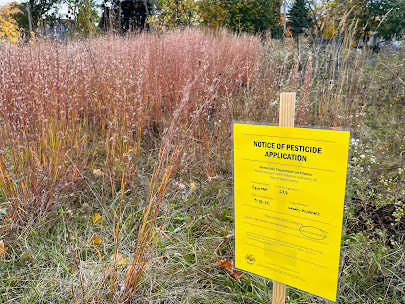 And sometimes that care involves using targeted treatment of weeds with herbicide. The food forest may well be organic, but a habitat is different from an organic farm. You can't till or mulch a prairie to control invasive plants. It's more like a body that may sometimes require medicine. In this case, low toxicity herbicide was applied to woody plants that, in a prairie, are considered weeds. 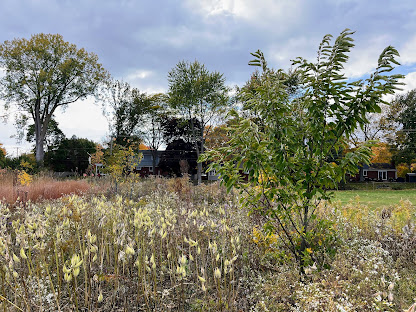 It looks like they made an exception for one very special tree--a native chestnut, which was planted in one of the meadows. 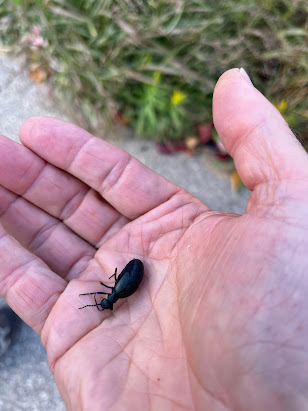 The local wildlife has a casual presence. What appeared to be a large green ant was crossing the asphalt path that winds through the park. It turns out to be variously named an oil beetle or blister beetle, Meloe campanicollis, though I must not have disturbed it enough to prompt it to secrete the oil that could blister my skin. 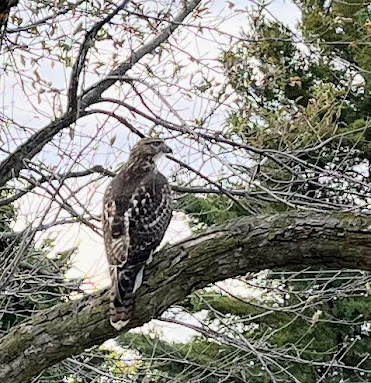 A hawk (red-tailed?) seemed unperturbed as we walked by.
Congratulations to Jeannine and all the other volunteers who have brought prairies back to life in Buhr Park. 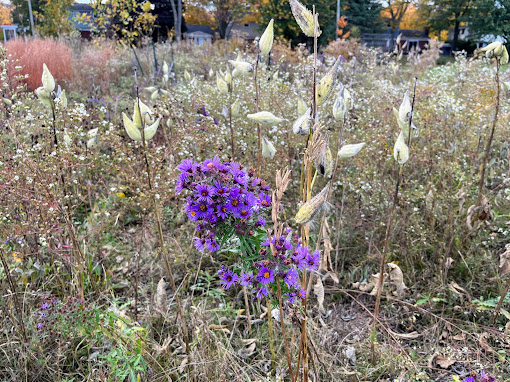