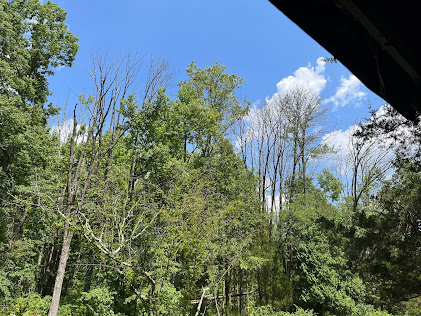 Scan any skyline in Princeton and you're likely to see dieback in the trees. This happens to be the view from the front step of Veblen House in Herrontown Woods, but the same can be seen in the woods surrounding Princeton Battlefield, and most everywhere else in town.
We're losing thousands of trees in Princeton, some quickly, some slowly. As described in past writings on this blog, dating back to 2010, the Emerald Ash Borer is proving every bit as destructive as predicted, killing all species of ash tree. And many red and pin oaks are succumbing to an introduced disease called bacterial leaf scorch.
Many of the trees lost to introduced insects and pathogens in the past century or so--first the American chestnut, then the American elm, and now the ashes--had been dominant trees in our forests. Until the Emerald Ash Borer arrived, sweeping east from its point of introduction (hitchhiking in packing crates from Asia) in southeastern Michigan, the ash had been Princeton's most common tree. The physical gaps, if not the ecological ones, get filled by one thing or another. At Herrontown Woods, tulip trees, red maples, hickories, and sweetgums grow into the voids. 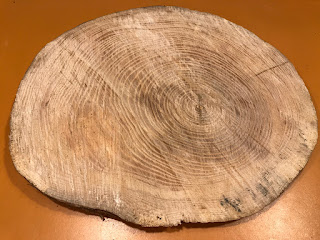 These radical changes in the forest canopy present challenges for those of us who manage Princeton's woodlands. Dead ash trees become brittle over time. Branches and sometimes whole trees fall across trails, requiring removal. Though the town arborist and his crew have been helping, oftentimes it's volunteers who carry chainsaws deep into the preserves to reopen a trail.
At Rogers Refuge, Princeton's birding mecca just downhill from the Institute Woods, it is avid birders who work on the trails. Lee and Melinda Varian have been particularly active. Melinda recently sent an email to the Friends of Rogers Refuge group, of which I'm a part, to report that "Lee and I just went out with our chainsaws for the third time this week to
clear fallen Ash trees from the Red Trail. It’s really heartbreaking."
She sent us these photos of a 50 year old ash tree that had fallen across a trail. Another volunteer at Rogers Refuge, Winifred Spar, wrote about how the history of the refuge is embedded in each tree's growth rings. 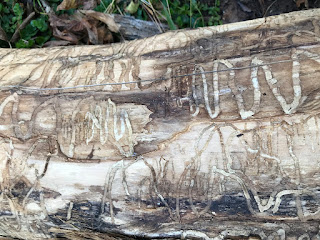 In this section of trunk, where the bark has fallen away, you can see how the Emerald Ash Borer larvae consume the tree's cambium. Like the earth's total dependence on a thin surrounding layer of atmosphere (which of course our machines' invisible emissions are radically altering), a tree's vascular system depends on a thin layer of tissue surrounding the trunk, just below the bark. Lacking any evolved defense against the introduced ash borers, the native ash trees quickly become girdled and die.
Though other tree species like oak and elm may be considered more statuesque, I have been surprised on occasion by just how gloriously big an ash can become. Two examples stood along the oval drive leading to George Washington's home at Mount Vernon. Another stood at the top of the bank of the Delaware in Lambertville. I was in awe at the thickness of their trunks. Surely the one in Lambertville has been lost, but might those at Mt. Vernon have been saved through chemical injections?
As tens of thousands of ash trees die in Princeton, requiring a vast expenditure to remove, has anyone actually seen an Emerald Ash Borer? I have seen a grand total of one, and that was a decade ago in Ann Arbor, MI, close to where they first were discovered in the U.S. By contrast, everyone has seen, and squashed, a Spotted Lanternfly, yet compare the harm done by the these two introduced insects and it's clear the largely unseen ash borer has been far more devastating in its impact. Our senses largely fail us for discerning the greatest threats to our world, be they an elusive insect or, far more devastating still, too much carbon dioxide in the atmosphere. To coin a phrase, call it "quiet radicalism."
By allowing light to reach the understory, the gaps in the canopy created by so many dying trees present a mix of problems and opportunity for managing our preserves. What shrubs will take advantage of the extra solar power, previously harvested by the trees but now reaching the forest understory? Native understory species like blackhaw Viburnum, highbush blueberry, and spicebush can now flourish and produce more fruit. If the deer didn't eat them, rarer native species like shadbush, pinxter azalea, and hearts 'a bustin' could make a comeback. But oftentimes, it is nonnative invasive shrubs that have colonized our woodlands--Photinia, honeysuckle, linden viburnum, winged euonymus, multiflora rose, and privet. Left uneaten by wildlife, the nonnative shrubs have a competitive advantage that could render our woodlands clogged with foliage inedible for local herbivores.
Changes in the understory can affect whether wildlife thrive. Winifred, a keen observer of bird life in Princeton, wonders "if the gaps in the canopy and increased invasive understory may already be having an effect on birds in the Institute Woods. It might explain why there were noticeably fewer Ovenbirds this past summer; they are ground nesters."
The ash tree won't disappear altogether. One old post, from 2014, entitled After Emerald Ash Borer, What Will Princeton Look Like, describes a visit to Ann Arbor, where the ash borer had already swept through. We still found young ash trees. My best guess back then remains my best guess now:

I would speculate that, once the native and introduced parasitic wasps become widespread, they in combination with woodpeckers could allow ash trees to persist in Princeton, though perhaps few would grow to maturity unless regularly treated with systemic pesticide.

Carolyn Edelman, a poet and nature enthusiast, recently posted a quote of Adlai Stevenson, II, dating back to a speech he gave in 1952. Its sentiment is part of a vein of American thought that views love of the American landscape as deeply connected to the love of freedom. For me, it is not coincidence that we live in a time when both nature and democracy are being undermined.  Read the quote through today's filter of gender equality and inclusion to find its relevance.

It was always accounted a virtue in a man to love his country. With us it is now something more than a virtue. It is a necessity. When an American says that he loves his country, he means not only that he loves the New England hills, the prairies glistening in the sun, the wide and rising plains, the great mountains, and the sea. He means that he loves an inner air, an inner light in which freedom lives and in which a man can draw the breath of self-respect. Men who have offered their lives for their country know that patriotism is not the fear of something; it is the love of something.

A great tree species passes from the landscape, but the love remains, and in that love reside both grief and possibilities.
Posted by Steve Hiltner at Friday, October 21, 2022