Savanna By The Lake 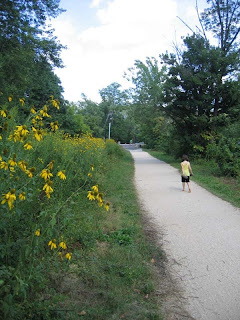 It's common to think of landscapes as either open or closed, bright field or dark woods. But walk along the towpath that runs between Lake Carnegie and the canal, just west of Harrison Street, and you enter an inbetween landscape of scattered trees and sunny openings, where wildflowers find their niches in the endlessly varied gradations of light.

It's hard to say what's "natural" about this spot. Many of the trees were planted by Princeton University long ago, and this narrow strip of land is squeezed between manmade canal and lake. But the landscape is probably closer in character to what the first European settlers would have found, back when Indians used fire to open up the landscape. The periodic fires would have left the oaks unharmed, protected by their thick fire-resistant bark, but most other trees would not have survived, allowing the sun to reach the ground and support a rich understory of grasses and herbs.

Although prescribed burns are used as a management tool elsewhere in the D&R Canal State Park, the land along Carnegie lake has been kept savanna-like by annual mowing. This is the best time of year to pay a visit. Beneath spreading oaks of many kinds, an unusual abundance of wildflowers prosper (see Aug. 27 post). On a recent walk, we startled a great blue heron who complained vigorously as it flew away, saw a red tailed hawk perching low near the trail, and watched from close range a goldfinch feasting on the impressive stand of cutleaf coneflowers. Right beside this natural abundance is a human current of canoes and kayaks on the canal, and joggers passing by on the towpath. This spot is in no way remote, but is richer than many a far-flung refuge.
Posted by Steve Hiltner at Saturday, August 23, 2008