A Fence Goes Against the Grain 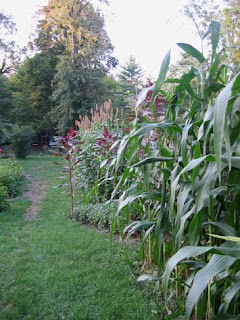 Or vice versa. A friend of mine successfully disguised a fenceline this summer by growing tall grains along it--corn, amaranth and sorghum. 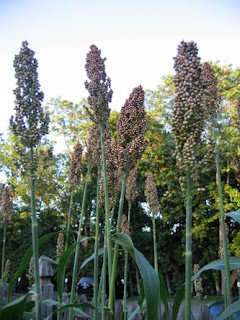 Sorghum looks like a corn plant with a different top. When I was in college, I made granola whose secret ingredient was sorghum, which came in a jar and was like molasses but lighter. 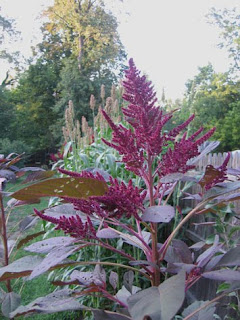 Amaranth is a genus of plants with a fascinating history and potential. An entry in Wikipedia tells of how it was grown for food by the Incas and Aztecs, then banned by the colonial powers, then recovered from wild plant populations in the 1970's. Being easy to grow and highly nutritious, it's seen as having great potential as "the crop of the future." Funny how the future can take forever to show up, though amaranth can be found in some breakfast cereals.

The amaranth in the photo may be an ornamental variety. There are also various weedy amaranths, though I haven't seen them around here. I frequently saw pigweed (Amaranthus retroflexus) in gardens in the midwest, often growing with lamb's-quarters.
Posted by Steve Hiltner at Sunday, September 12, 2010