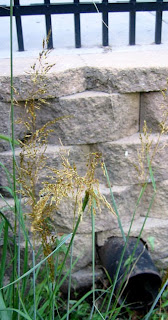 A few years back, I spent an afternoon with some of Tim Anderson's science students collecting bags of Indian grass seed in a location where annual mowing allows prairie species to survive. This is the same Indian grass that flourishes in tallgrass prairies out west. In Princeton, it's most common along the petroleum pipeline right of way that cuts across the Princeton ridge, and in the meadows at Tusculum. Tim wanted to get some growing in the high school ecolab wetland on Walnut Street.

This is the first year they have grown up and flowered in significant numbers on some of the higher ground at the high school wetland. They have golden anthers that can be attractive in a subtle, hard-to-photograph sort of way. 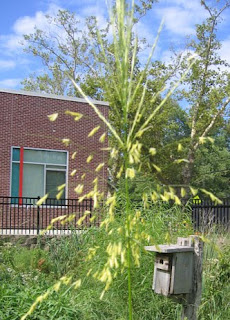 Another grass at the wetland, planted this spring and now flowering, is wild rice, which grows wild along the Stony Brook and at Rogers Refuge. Like corn, it's an annual that grows to remarkable size in one season. The wild rice, when combined with the cattails, Jerusalem artichoke, duck potato, elderberries and, for carnivores, the thriving crawdad population, is making the wetland look more edible all the time. This photo reproduces exactly what the flower head looks like when I have my glasses off. 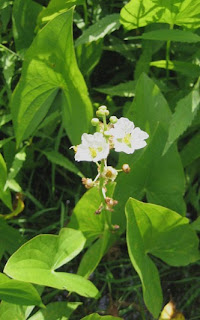 Duck potato,a.k.a. arrowhead, is also blooming this time of year, 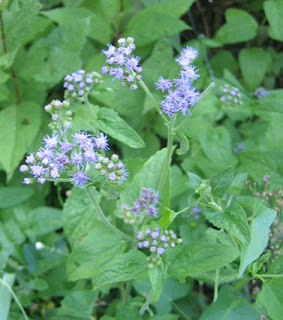 along with mistflower (Eupatorium coelestinum), which only grows to two feet high. It's ambitions are more horizontal than vertical, as it can get expansive and pushy if not surrounded by equally aggressive natives. 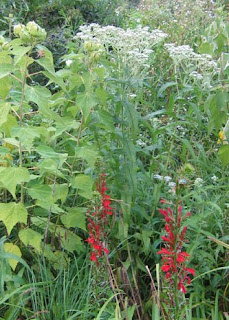 Cardinal flower (red) and boneset (white) are likely no longer blooming when this is finally posted. If you visit the wetland now, the dominant color may be yellow, with tickseed sunflower and the native tuberous sunflower called "jerusalem artichoke" taking over the stage.