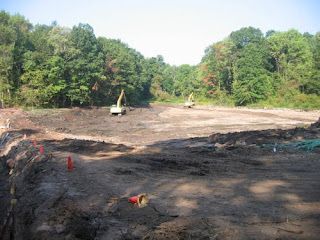 Now, that's strange. Seems to me there was a lake around here somewhere. The plug has been pulled, the 7 feet of fertile sediment accumulated over the past 100 years is being dug and hauled off to farms and topsoil makers, and the dam is being restored to its cerca 1900 appearance. Given the highly conducive weather thus far, the contractor is hoping to complete restoration of the upper lake and dam by December.

One of the streams that feeds the lakes enters back where the trees meet the mud in this photo, between the two backhoes. From an old aerial photo the engineers determined that the pond used to extend further up into that valley, and I was alerted that some more mud and associated plants would be coming out. 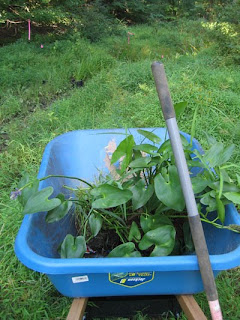 FOPOS board member Tim Patrick-Miller agreed to help me rescue some of the wetland species before the digging started. Much to my surprise, we found 4 species to add to the list of plants growing at Mountain Lakes.

In the wheelbarrow (our manual labors contrasted comically with the big machinery of the dredging operation) is pickerel weed, which is rarely found growing in the wild in Princeton. It likes shallow standing water at pond's edge. 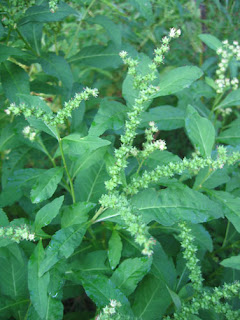 Nearby was a little gravel streambed, away from the main current, that was clearly perfect habitat for three other species of plants also rarely encountered. This one, new to me, turned out to be ditch stonecrop. Not a pretty name, but it's true it was growing in something akin to a stony ditch. 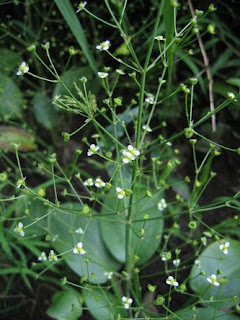 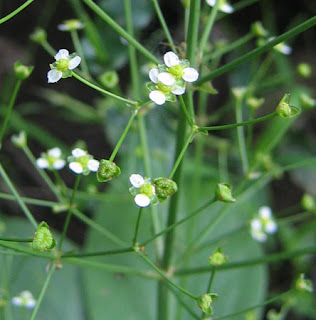 Petals and branchings come in threes. 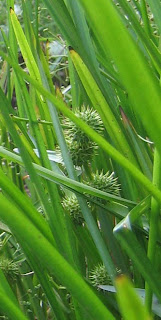 Bur Reed has leaves like an iris and seed capsules like those that fall from a sweet gum tree.

All four of these species only survive in locations that stay consistently wet throughout the summer. Though this continent once had abundant wetlands with much more stable hydrology, suggesting these plants were once abundant, the only places I find them now are in areas kept artificially wet, such as the edges of impoundments like Mountain Lakes, and the pump-enhanced marsh at Rogers Refuge.
Posted by Steve Hiltner at Tuesday, September 21, 2010