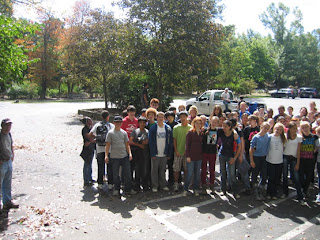 Early on the morning of September 17, some 100 freshmen and six teachers walked through the preserved woodlands that stretch from Princeton Day School to Community Park North. Their goal was to help clear invasive plants from the woods around the CP North parking lot, as part of PDS's community day. 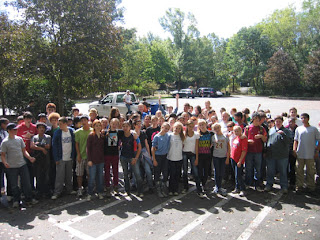 When they arrived, I told them about the work Friends of Princeton Open Space has done over 40 years to help preserve the lands they had just hiked through, and explained how habitat restoration can effectively increase the acreage of functional open space in town by shifting the plantlife to native species that wildlife prefer to eat. 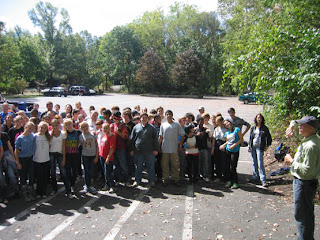 There were also some tool safety tips and warnings about poison ivy to impart. 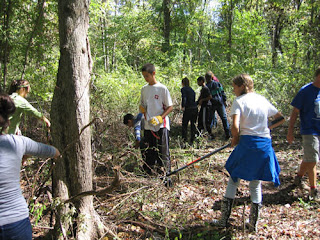 Armed with this knowledge, and a whole bunch of loppers and garden rakes provided by the school, the kids broke into six groups and took on the somewhat daunting task of clearing multiflora rose and other invasive exotic species from the woodland. 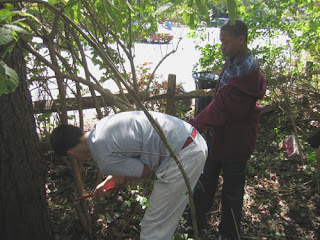 Teamwork was emphasized, as one student would push the branches back with a garden rake so another could get underneath and cut the stems. 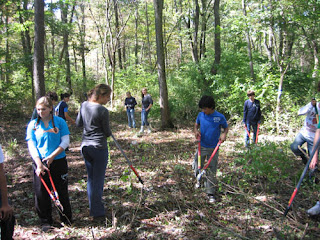 For me, the primary goals were for kids to learn how to use the tools safely, work together and gain some confidence in identifying shrubs like honeysuckle, privet and Asian photinia--the same sorts of weedy shrubs that likely grow along the fencelines around their homes. Any progress towards tipping the balance in the understory from exotic to native would be gravy. 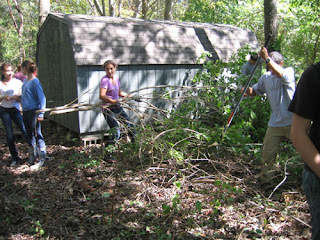 Turned out there was a lot of gravy, as the kids worked hard through a morning session, and even harder after lunch. For the afternoon session, we took a teacher's advice and marked off sections of woods that each group was to clear before hiking back to school. Seeing the boundary of their task, the kids worked harder, which for many led to the discovery that the hard work of land stewardship can have satisfactions beyond reaching the day's goal. 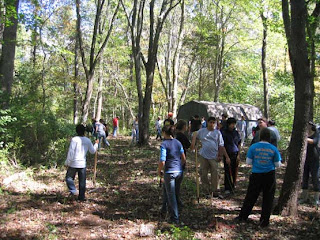 The result was a dramatic change in the landscape, new vistas and an opportunity for natives to repopulate the woods.

Thanks to the freshmen students and teachers of Princeton Day School for all their help. And thanks also to my friends Andrew, Linda and Annarie for coming by to help supervise.