Chestnuts Boiling On A Stovetop Fire 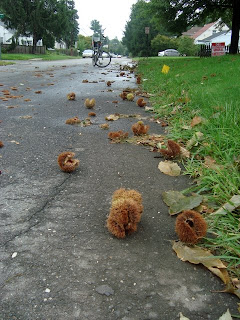 This week's roadside menu features chestnuts. The American chestnut, once a prominent tree in our forests and an important source of food for wildlife and people, was laid low by a lowly imported fungus more than a century ago. The native species is making a slow comeback thanks to decades of breeding to develop immunity to the disease, but in the meantime, there are chestnuts of Asian origin scattered here and there in Princeton that scatter their tasty treats on the streets this time of year. 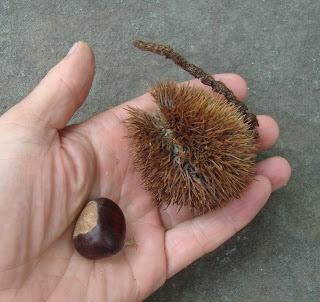 The treats come encased in a spiny covering that looks and feels like a baby brown porcupine. 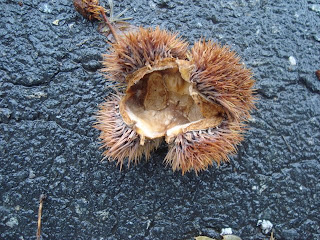 Squirrels, as always, get first dibs, combing their whiskers at the same time. 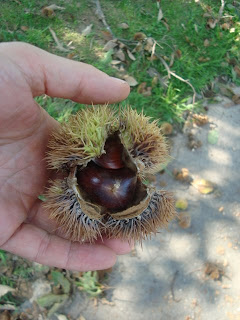 But a few yield up a shiny treasure for lowly humans. 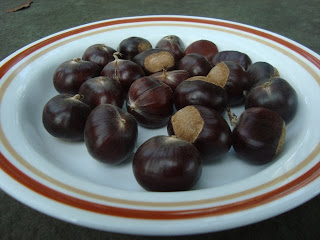 Though Mel Torme makes chestnuts roasting on an open fire sound appealing, the first batch tasted great after 15-20 minutes of boiling, with a flavor reminiscent of sweet potatoes. Recently, though, a friend roasted some on a gas grill for a similar amount of time, and it has to be said that the aroma generated by a plate full of freshly roasted chestnuts is enough to endear one for life to this rarely encountered food. 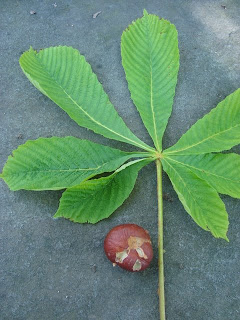 As any squirrel can tell you, the chestnut is not to be confused with the Horse Chestnut (Aesculus hippocastanum), which lacks the dense spines and is inedible. Palmate (leaflets radiate out like fingers from the palm of the hand) leaf and nut in photo. I used to collect horse chestnuts as a kid, in part because of their lustrous beauty but also with big plans to use them as ammunition in defense of strategic positions. Can't remember if any battles were actually waged.

Below is some advice from Bill Sachs, our resident expert on nut-bearing trees, about eating chestnuts (Castanea sp.). Harvesting chestnuts from the roadside, it's hard to tell if they've already cured for a week, and the chestnuts we've cooked thus far have been free of any bugs, but it's good to keep these things in mind. Also, be sure to score the shell before cooking. Otherwise they can explode like popcorn. I had one spit in my eye.

"Most nuts need to “cure” for a week or more after harvest to reduce their moisture content before they acquire proper flavor and texture.


One note of caution… before you roast your chestnuts, cut a couple of them in half to see if they contain curculio larvae.  The chestnut curculio or weevil is a fairly widespread pest that lays its eggs in developing chestnuts.  When the chestnuts fall to the ground, the change in temperature signals the eggs somehow and they hatch.  The result can be an unpleasant surprise.  In their natural life cycle, the larvae emerge from the chestnuts by eating a small hole in the shell and burrowing into the ground to emerge a year or two later as the next generation of weevils."