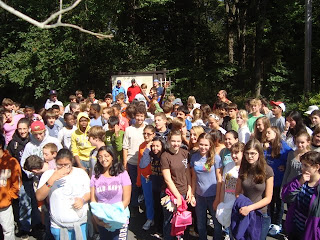 On September 16 at 9am, 100 PDS 9th graders arrived at Community Park North ready to help remove invasive plants, as part of the school's annual Community Day. First step was to buddy up with 4th graders who had also made the hike over from their school. 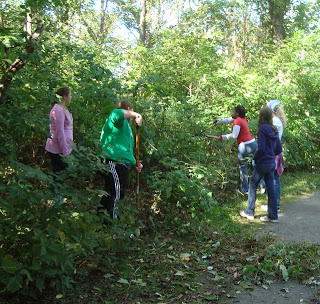 After a brief intro by yours truly about plant identification, the why and the wherefore of invasive plant control, and some tips on how to use loppers, saws and garden rakes safely, they set about the day's task. 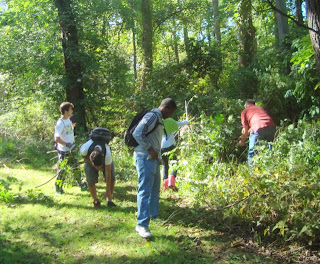 Neither the thorns of multiflora rose nor the sheer numbers of invasive shrubs crowding the woods could deter them from their newfound mission. Those with loppers cut honeysuckle, privet and multiflora rose, while others hauled the cuttings into brushpiles, to serve as habitat. 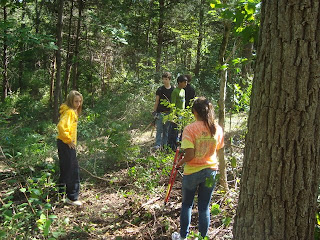 What I particularly enjoy is showing the kids how to work together, use the tools most effectively, and how to get into a steady working rhythm so that a lot can be accomplished. After a morning's work session, they could see the difference they had made. 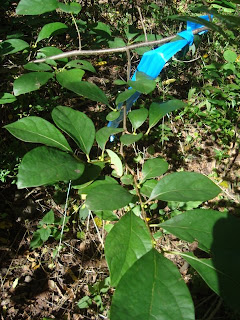 Native shrubs intermixed with the exotic invasives had been tagged beforehand, and left uncut to take advantage of the additional sun and water available now that the exotic competition had been removed. In the photo is spicebush (Lindera benzoin), which the kids discovered gives off an appealing fragrance when the leaves are scratched. That natives will fill the void left by the removed invasives helps make clear the positive impact of the work. 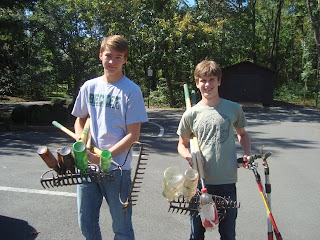 An innovative method of transporting litter was developed when some of the kids went back out to pick up stray tools. 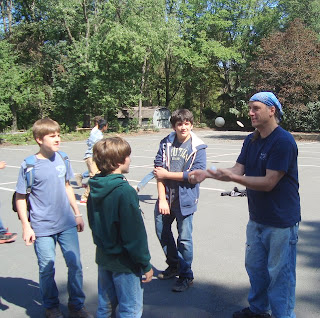 During the lunch break, volunteer Andrew Thornton engaged the kids in some juggling. 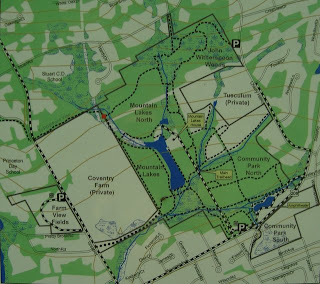 After lunch, I led the 9th graders on a tour through the 400 acres of preserved land in and around Mountain Lakes. Like so many Princetonians, the majority of the kids had never seen Pettoranello Gardens, the evergreen forest, or the historic fields of John Witherspoon's Tusculum. (the area we worked on is in the lower right; PDS school is in the upper left) 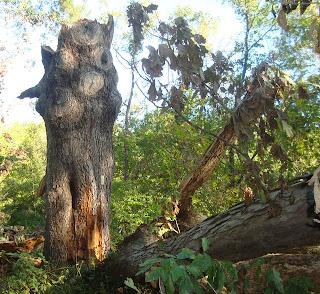 They walked past trees stripped of their limbs by Hurricane Irene, 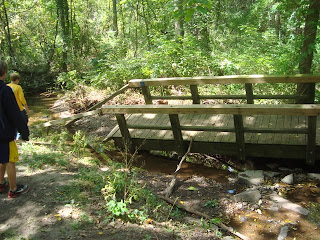 clambored across a bridge washed askew by the recent flooding, 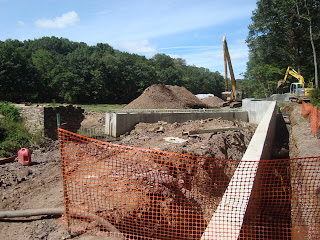 and past construction to restore the lower dam at Mountain Lakes.

At one stop along the way, a student asked why it's called Mountain Lakes if there are no mountains nearby. I explained that Princeton bestows its ennobling magic on all within its borders, making ponds into lakes and hills into mountains. These words having been spoken, I am sure that all within earshot gazed out upon the landscape with new eyes. 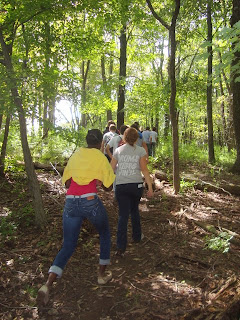 When they reached the turn leading to their school, they disappeared up the trail, their good deeds done and another school year begun.

The Friends of Princeton Open Space thank the students and teachers of Princeton Day School for their contribution to restoring habitat in town.

Thanks also to community volunteers Andrew Thornton and Tony Beesley for helping out with supervision.
Posted by Steve Hiltner at Friday, September 23, 2011