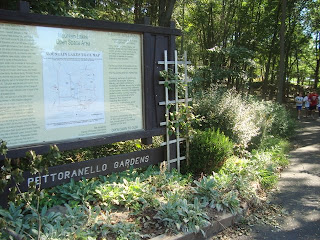 One of Princeton's secret, verdant enclaves is Pettoranello Gardens. If you not only know where it is but can also spell the name correctly, you are truly among a select few. It's a bit like the word "Wednesday", which refuses to spell itself the way people say it.

The Gardens can be found just down the paved trail from the Community Park North parking lot, off Mountain Avenue at 206. 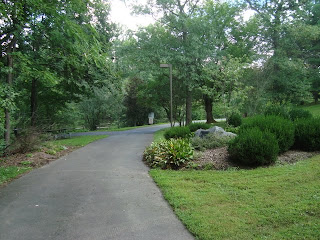 Though the setting looks natural, it was reportedly once a dump. After a great deal of cleaning up, ground was pushed around to form a berm to buffer the Gardens from 206, and a pond was created, fed by a stream diverted from its original course. 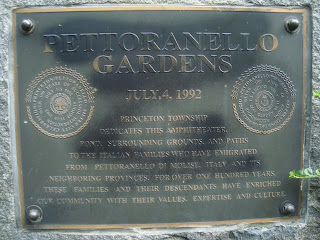 The grounds are tended by volunteers with the Pettoranello Foundation--Pettoranello being Princeton's sister town in Italy, from whence many Princetonians originally came. They traditionally have workdays early on Sunday mornings, assisted by township staff. 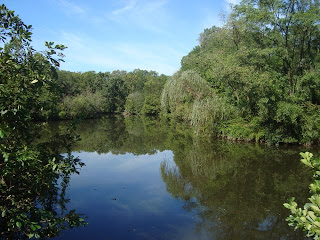 The centerpiece of the Gardens is Pettoranello Pond, a manmade impoundment with a maximum depth around 8 feet. 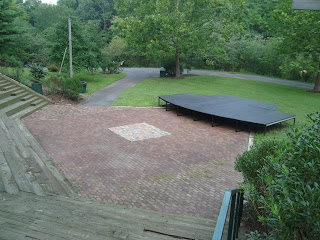 An amphitheater looks out over Pettoranello Pond. This performance space used to host Shakespeare plays in the summer, but now is mostly used for periodic musical performances, and just today by the local Stone Soup Circus. I believe the Princeton Township recreation department oversees programming. 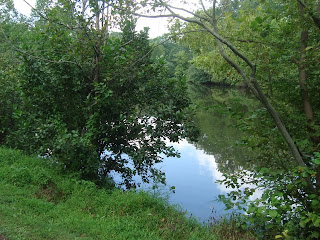 A dense planting of alders along banks breaks up the view of the water, but no doubt helps support the banks next to the paved trail. 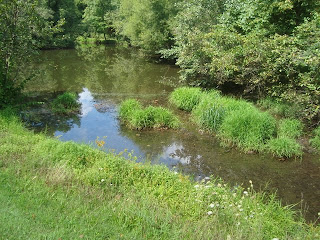 Though the pond was dredged not long ago, it's upstream end is already filling with sediment from the feeder stream. I wish there were a way to periodically dig the sediment out, so as to postpone the next dredging, but in the meantime the shallows are great habitat for turtles. The pond is fed by two branches of Mountain Brook, one that comes tumbling down from the Princeton Ridge next to 206, the other beginning at the north end of the high school grounds, along Guillo Street.