If you're out in a park tomorrow, take a look up in the air.

First, a memory: A couple years ago (will have to check what time of year), I chanced to walk into Potts Park--the little pocket park just off North Harrison Street--to find the sky filled with hundreds of large dragonflies. A closer look revealed that they were feasting on small winged, antlike insects streaming up out of the ground. The dragonflies zigged and zagged, snatching flies from just above the lawn up to sixty feet or so. Above them, in turn, was a flock of swallows trying to catch the dragonflies. A plain park of grass and play equipment had been transformed into a dazzling airborne foodchain of hunters and hunted, all precipitated by the hatching of a colony of insects that had probably been quietly living under our feet the whole summer. The plain lawn proved not so plain after all. 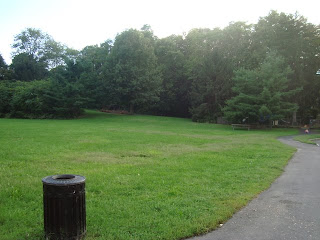 This memory came quickly to mind when today, returning home around 5:30pm, I found a phone message from Peter Wolanin, former collegue on the Princeton Environmental Commission. He had called to tell me dragonflies were swarming in Quarry Park. There had been lots yesterday, but still quite a few today. I got there in time to find about twenty large dragonflies, bluish in tint, flying above the lawn. What, don't you see them in the photo? I had about as much luck photographing their zippings around as the swallows had two years ago catching them for dinner. 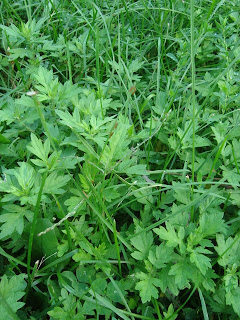 There were no swallows this time, but I was able to track down the source of the small insects the dragonflies were catching. They were emerging out of a plain patch of mowed grass and mugwort near a stormdrain. 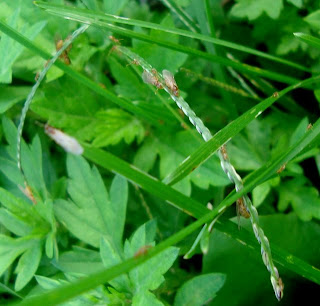 These, too, were hard to photograph, but you can see their antlike shape and wings. They crawled around on the grass blades until ready to fly. Some appeared much smaller than the others.

They're tiny, but apparently worth the while for the dragonflies. It's a scene not unlike the hatching of sea turtle eggs on a beach, where the baby turtles then have to run the gauntlet from nest to surf before getting snagged by a seagull.

Though the dragonflies' approach could seem helter skelter, they will sometimes assume a very systematic search pattern. Staying head height off the ground, one will fly thirty feet in a straight line, then make two perfect 90 degree turns to return in the opposite direction, exactly parallel to its previous path, offset about five feet. The pattern seldom lasts long before they break it to snag another insect.

A few dragonflies were also found patrolling above Potts Park today, a quarter of a mile away, where a similar hatch must have occurred.

More distant memories of dragonfly swarms were more likely associated with migration, such as when I saw thousands of them flying what must have been north, above the freeway that parallels the shoreline in Chicago.

There are many, many videos of dragonflies swarming on youtube. Here's one from "thedragonflylady."
Posted by Steve Hiltner at Saturday, September 10, 2011