One Man's Mess Is Another Bird's Habitat 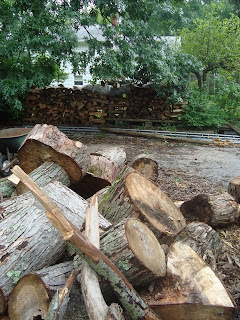 Sometimes, most of the time, it's easier to conceive of possibilities than realize them. Take this pile of wood, for example. Great stuff, and delivered at no cost! It can be chopped up to make carbon-neutral fuel in a modern, clean-burning stove, 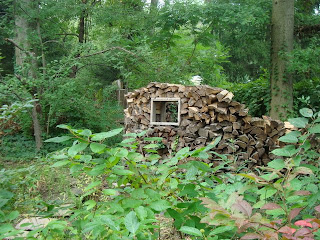 or it can be stacked to make sculptures in the backyard.

Or, it can sit in the driveway, unsplit for most of the summer.

Free time and determination finally converged in the Princeton doldrums of late August, and I was feeling celebratory about the diminishing size of the pile when a Carolina wren came over and perched on the remaining wood, just three feet from me. Puffing up its feathers in an endearing show of chutzpa, it seemed to be pleading with me to leave the pile be. From the human perspective, I was cleaning up a blighted part of the driveway. In the bird's world, I was messing with what?, a nest?, a wonderfully chambered kindergarten for fledglings?, a playground?, a safe harbor from neighborhood cats? A birder friend told me they would not be nesting that late in the summer. 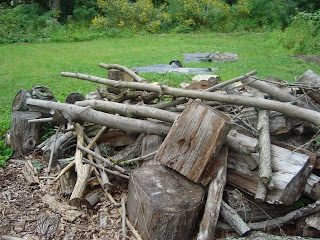 Later, four wrens were seen having some sort of discussion on another woodpile, with a similar indifference to my approach. By the time I had returned with a camera, they had left, apparently resigned to the inscrutable need of humans to dismantle perfectly good jumbles of wood.