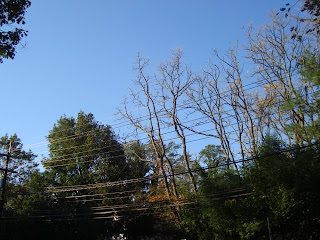 The juxtaposition of Norway Maple and Kentucky Coffee Tree makes for a stark contrast in relative timing of autumn leaf fall. The native coffee tree (Gymnocladus dioicus) strategy for life is to play dead for half the year. Thus its latin name, which means unclad. It drops its leaves early in the fall, and is the last tree to leaf out in the spring.

To the left of the coffee trees in the photo is a Norway Maple that has yet to react to fall weather. Like many woody plants introduced from other continents, it tends to leaf out early in the spring and drop late in the fall. 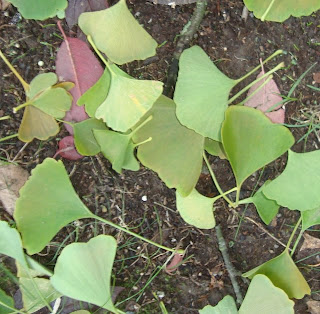 The Ginkgo tree, believed at one time to be only a fossil, then found alive and well in remote valleys of China, is now a common street tree with a dramatic approach to losing its leaves, 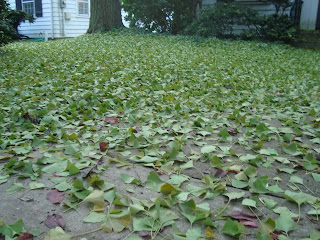 sometimes dropping them all in one day.
Posted by Steve Hiltner at Friday, November 04, 2011