Woodchip Piles and Other Massings 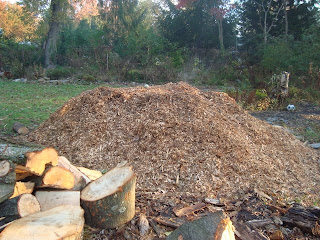 A pile of fresh woodchips doesn't look particularly dynamic, but this one took only two days to start steaming. 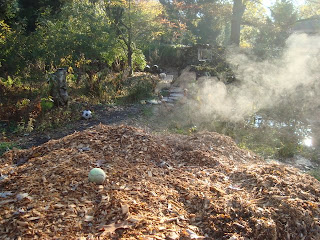 The steam, which rose from only one spot, gave the pile the look of a miniature volcano. Though steam may look like smoke, it's a sign of health, not danger--the steam being an ongoing exhalation and venting of heat as microorganisms consume the wood's energy, transforming it into heat, CO2 and water vapor. 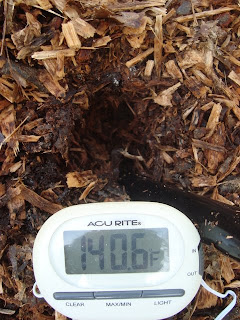 After a week or two, on a 55 degree day, the temperature about a foot beneath the surface was 140 degrees. It felt burning to the touch, but I've never heard of a small pile like this catching fire. I searched the web for testimonials, without success. "Georgia Gardener" website offered some validation for my lack of worry. It considers the danger of small backyard woodchip piles catching fire to be an urban legend. Much larger piles that are unable to vent their heat may be a different matter.

Some people try to use this heat. There's an urban greenhouse in Milwaukee that heats its greenhouses in part with compost. 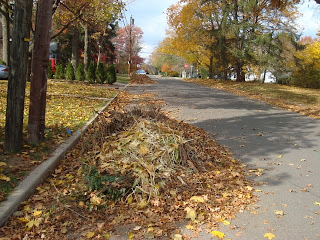 If a lot of good organic nutrients end up in the wrong place, like these leaves and garden clippings incongruously banished to asphalt, or kitchen scraps thrown in the trash, it may be because any massing of organic matter is considered suspect. Fears that leaf piles cause odors, or kitchen scraps composting in the backyard attract varmints, often thrive without any need of evidence.

Part of getting back in sync with the natural world involves allowing decomposition a place in the yard, working with its quiet powers, and thereby mending the circle that is nature's endless cycling of nutrients.
Posted by Steve Hiltner at Friday, November 11, 2011