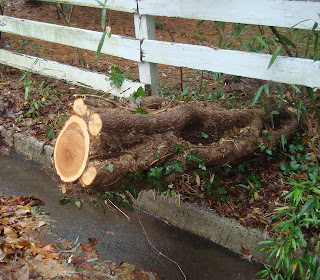 This picture tells the story of a neighbor's Kentucky Coffee Tree  laid low by English Ivy's long embrace. The smaller trunks are the ivy, which had climbed far up into the canopy of the tree. During the freak snowstorm earlier this fall, the snow clung to all that extra surface area created by the ivy, the extra weight of which toppled the tree. The fallen tree blocked the street for a week. 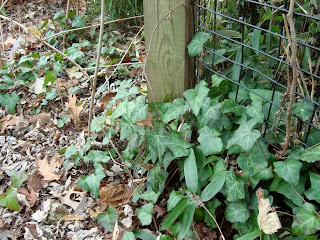 My backyard, too, is in an uncomfortable embrace of English ivy, in that the vine is invading from the neighbor's yard to the north, 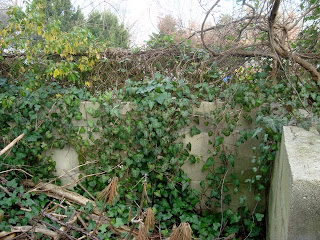 cascading in over the ramparts facing the park to the east, 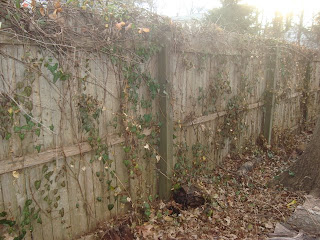 and creeping over, under and through the fence to the south. If a neighbor's runoff is flowing into my yard, I can change the contour of the ground to direct it away from the house, and consider the problem largely solved. But the flow of ivy in from neighbor's yards cannot be diverted, and instead creates a perennial chore. 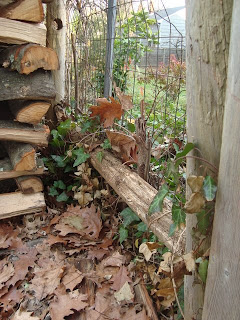 One approach to getting rid of it without working too terribly hard can be found at http://princetonnaturenotes.blogspot.com/2007/11/ivy-control-part-2.html.  Other related posts can be found by typing the words english ivy in the search box at the upper left corner of this blog.
Posted by Steve Hiltner at Wednesday, November 30, 2011