I had strategically allowed dandelions to grow in my front yard all spring, seeking to reassure the community that my lawn is completely free of harmful chemicals. The yellow flowers dotted the lawn pleasantly enough, and there were other things to do. 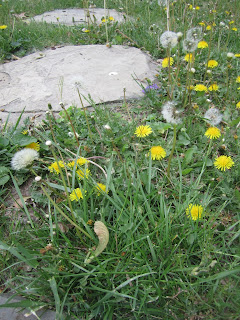 The tide turned, however, as it always does. The yellow turned to raggedly balls of white seeds on gangly stalks, proclaiming in a gathering roar, "Neglect!". 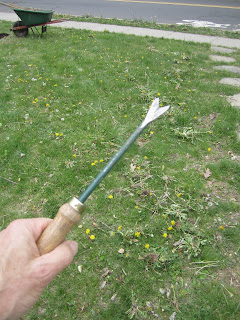 Hearing the racket, I opened the door to find, much to my annual surprise, hundreds, thousands, or at least more dandelions than I could shake a dull weeding knife at. 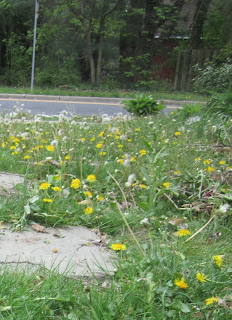 If there were just a few, I might be praising dandelions for their casual beauty, their edibility, or the pleasure of blowing their seeds off the stalk. But instead there are many, so many that when they suddenly go from "nice place you got here" ornamental yellow to "hope you don't mind if we take over" gangly white, the lawn appears stricken with a bad hair day. 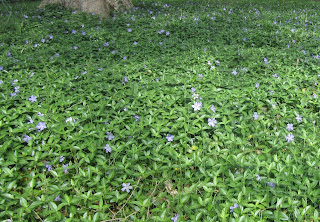 Other kinds of plants, like lawn grass or periwinkle, which may be present in far greater numbers, don't trigger the same negative response because their multitudes merge into a single neatly composed entity. Being perceived as a single entity can, in the case of periwinkle, allow it to multiply without changing its overall appearance. It also avoids shocking overnight transformations, maintaining a consistent, unobtrusive look while it quietly takes over the yard unnoticed. 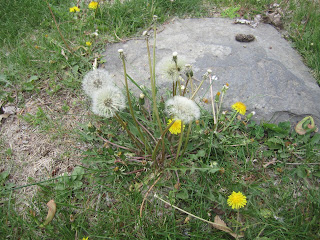 Dandelions, on the other hand, are determined nonconformists, refusing to come together as a group in a unified texture, no matter how many are massed together. They sing not in a calming unison but in a cacophany of flowers, seedheads and spent stalks all at the same time. 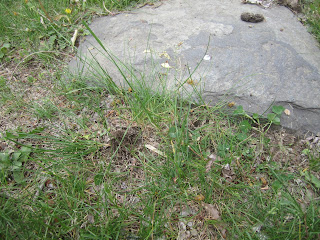 Wishing for a "quieter" front walk, where soon to arrive guests could approach the house without generating a cloud of seeds in their wake, I went with the stock response, by severing the taproot with the weeding knife, plucking the botanical rioteer from its stronghold, and thereby instantly re-establishing an appearance of calm. 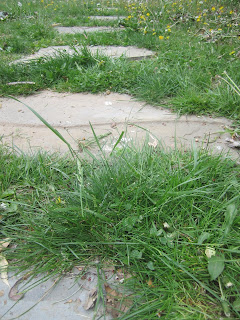 After a bit of hand to root combat, all that was needed was to bring in my upside down helicopter on wheels to groom the yard and quiet the chaos a bit further.


By chance, one of the dinner guests brought a platter bearing an attractive painting of a dandelion. Within a day or two, the yard had once again become a sea of dandelion seedstalks.

Afterthoughts: If dandelions were spreading to natural areas and displacing native species, I might get serious about clearing them from the yard, but their edibility for wildlife makes any invasion of woods and fields unlikely.  They could also be a useful, non-mechanical means of aerating a lawn. When the urge to weed them out strikes, cut them off just below the rosette of leaves, so that the decomposing taproots will serve as channels for rain to percolate into the soil.

Black vultures four--who could ask for anything more? Okay, there are just three in this family photo. We'll get to the fourth one in...