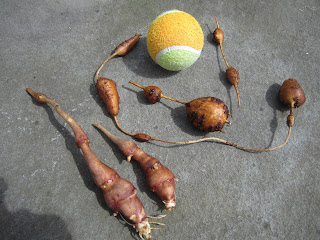 If it's spring, it must be time to do all the things that didn't get done over the winter (or whatever season that was), like harvest the tubers before they all sprout.

Lower left in the photo: Sunchokes (which is short for "SUNflower that's native and grows edible tubers that someone decided to mis-name Jerusalem artiCHOKE") are a wild and crazy plant that grows to ten feet high, has dazzling yellow flowers on top and forms enough tubers underneath to fill your refrigerator.

It's dangerous for heavily distracted people to plant, because one plant will develop a root system ten feet wide, and send up 50 new sprouts the next year if the tubers aren't harvested. Which is why I tried growing it in big black plastic pots last year, to see if its rambunctiousness could be contained. The experiment was a success, with 130 tubers of varying size, weighing about 10 pounds total, harvested from a single pot 2 feet wide and 2 feet deep.

Now, it's just a matter of getting in the habit of eating them. Peeled (or much more easily not peeled) and eaten raw, they have a nutty flavor about as tame as that of a carrot.

Upper right in the photo are groundnuts (Apios americana), a native legume that produces green beans on top and strings of edible tubers underground. A friend sent me a link to an excellent article on this little known plant in Orion Magazine. It, too, can spread underground, and seemed happy enough to be in a container last year. These experiments are related to the (save the) Veblen House project, which could include a native foods/permaculture dimension.
Posted by Steve Hiltner at Friday, April 06, 2012