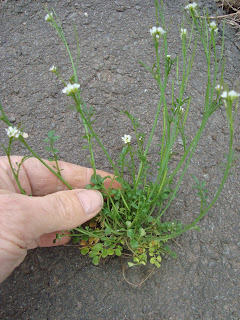 Most gardeners will have encountered a small weed this spring with tiny white flowers that have already bloomed. The thick circle of basal leaves suggests it's the non-native Hairy Bittercress, rather than the native Pennsylvania Bittercress. 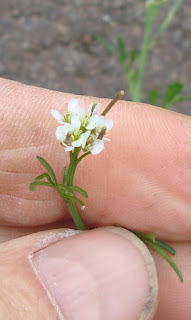 The plants produce seeds that will fly up at you as you try to pull the plants out. That's how you know you have, yet again, procrastinated too long before weeding them out of the garden. I was moved to pull many of them from my yard in time this year, but only because I was expecting company. There's a lesson in there somewhere. 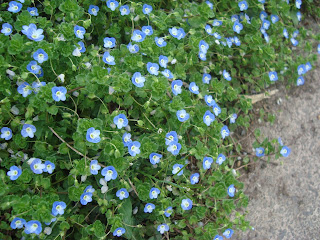 Another non-native is Veronica (probably V. persica), which forms low clumps in the lawn with many tiny blue flowers. Lovely flowers when viewed up close. It shows up in lawns, but I haven't seen it being as aggressive as some weeds. Update, spring, 2022: Veronica is spreading like crazy across my lawn. As with so many yard weeds, this is way too much of a good thing. 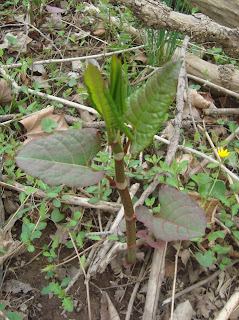 Japanese knotweed pops up like asparagus from among last year's dried stalks. It is a common non-native invasive along rivers, forming dense, exclusionary clones. This one's part of a patch just upstream of Pettoranello Pond. 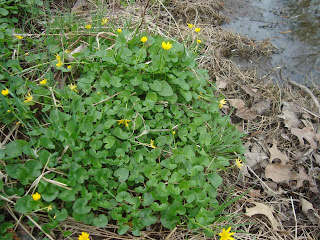 An increasingly common weed in lawns and gardens is lesser celandine, mentioned in a previous post. 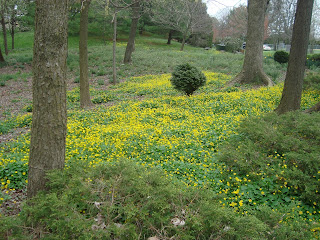 It spreads quickly to form dense masses that are pretty for a couple weeks but don't leave much room for other wildflowers to grow. If wildlife don't like the taste of it, and as far as I know none of them do, they have to seek food elsewhere. This is a big reason why even a beautiful exotic flower can be a concern, because it doesn't support a foodchain of diverse organisms, i.e.  is slowly making the landscape inedible. 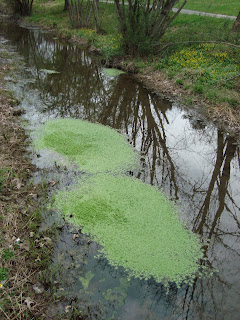 This is an aquatic plant at Pettoranello Gardens that I first noticed showing up last year, most likely called pond water starwort (Callitriche sp.). 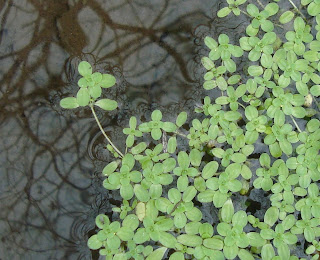 From Europe and northern Africa, it's considered an exotic invasive in Connecticut. 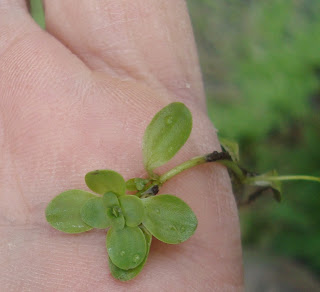 It might be mistaken for the native duckweed, but a clump of duckweed consists of thousands of individual plants, each with a pair of leaves.

(Thanks to Chris Doyle for help with identification)
SOME OTHER POSTS ON WEEDS:
An Explosion of Spring Weeds
Weeds That Launch and Underground Insurgency
Posted by Steve Hiltner at Wednesday, April 04, 2012