Trees On the March 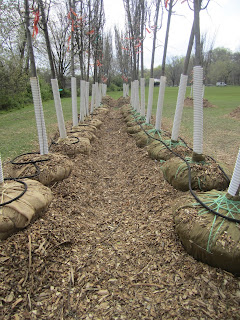 Something's going on in the field down next to Faculty Drive, across Washington Road from the boathouse at Carnegie Lake. 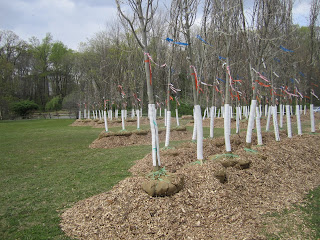 The troops are assembled, like high-stepping Clydsdales poised for the Arbor Day parade. Ready, forward, march!

But where to? The man assigned to water these 20 foot tall specimens said they're all headed into the woods to grow in the shadow of their granddad's generation, just across Faculty Drive, where the university is finishing up its stream restoration in the valley next to the new Chemistry building. (To see a history of the project, type "stream" into the search box at the upper left corner of this website). The university had to take down a few big trees last year (some possibly 200 years old) as part of the restoration of the heavily eroded stream corridor, and looks determined to give their replacements a head start. 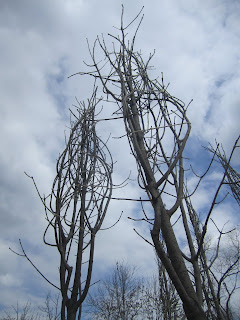 The stream restoration is extraordinary in terms of how they created a lovely and hopefully durable streambed, but the botanical side of the project would have been more enlightened if it had included rescue of high quality native wildflowers prior to construction, and invasive species removal on the adjacent slopes.

And though they're putting in the same species of trees they took out--tupelo, pin oak and white ash--the chances the white ash in this photo will survive for more than a decade are pretty remote, given the near certain arrival in coming years of the exotic Emerald Ash Borer now spreading eastward through Pennsylvania. 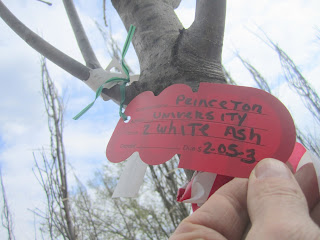 I was craning my neck to see the thick, paired twigs that identify the tree as an ash, when I realized I could just look at the tag.
Posted by Steve Hiltner at Saturday, April 14, 2012