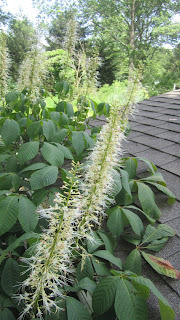 Buckeye species come in varied sizes. This one, bottlebrush buckeye (Aesculus parviflora), has a growth pattern similar to sumac, forming a low clone over time. Having overgrown its narrow space between a path and the low carport roof, this specimen should have been moved in early spring, but to catch this year's flowers, I moved a portion early and left the rest until after it finishes blooming.

Native to the deep south (Georgia, Alabama, South Carolina), the USDA range map (click here and scroll down) unexpectedly shows disjunct wild populations in Pennsylvania and Somerset County, just to our north. I wouldn't be surprised if these northern populations are escapes from cultivation. 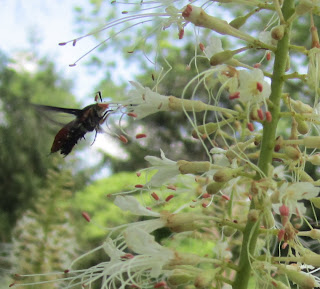 The tubular flowers attract some enthusiastic pollinators, including this moth that imitates the flight of a hummingbird.

Type "buckeye" in the search box at the upper left of this website for previous posts about bottlebrush and red buckeyes.
Posted by Steve Hiltner at Thursday, June 28, 2012