After I posted an expose on an overgrown sidewalk in my neighborhood, a friend emailed to report another sidewalk in town whose copious foliage she does daily battle with on her way to work. 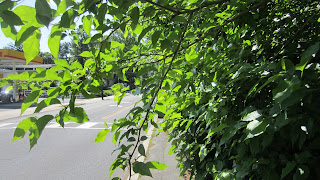 Upon arriving at the scene a mere two weeks later, my first impression was that there was no problem, because there was no sidewalk. 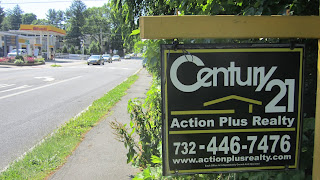 But closer inspection revealed evidence of a strip of asphalt originally intended for pedestrians. Could it be a remnant of the Indian trading route upon which Bayard Lane (206) is said to be built? Presence of a well-aged realty sign suggested no owner present to keep the trail clear. It being a state road, jurisdiction for maintenance could be even more muddled.

Given that I had come equipped with a camera rather than loppers, I decided my role was to document rather than resolve the problem, and provide tips on how to make the best of the situation until the party responsible for maintenance could be found. Here is my virtual guided tour of a nearly unnavigable sidewalk: 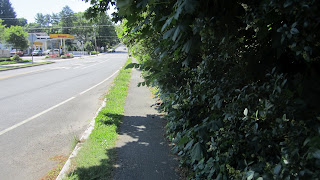 As you head south along the trail from Mountain Ave, acknowledge the hearty greetings of the foliage. 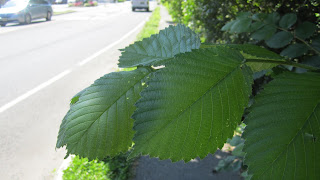 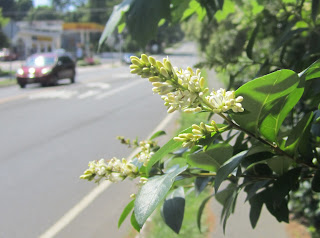 As cars and trucks speed by just a few feet away, take time to smell the privet. 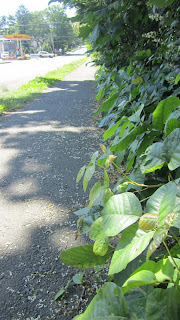 While sidestepping the poison ivy, 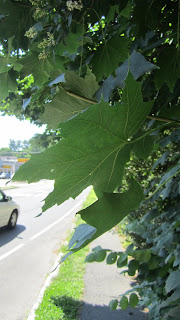 take note of the rich variety of leaf shapes-- 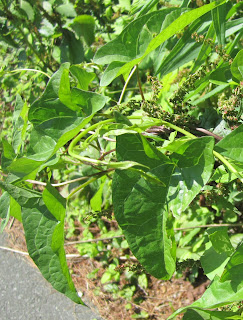 Be glad this bindweed isn't growing over the shrubs in your backyard. 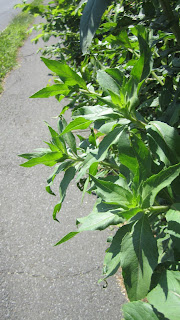 Daydream of evening primrose flowers to come in late summer. 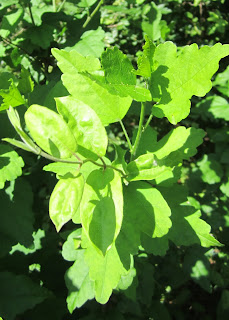 Sigh at the intimate intertwining of Japanese honeysuckle and Rose of Sharon. 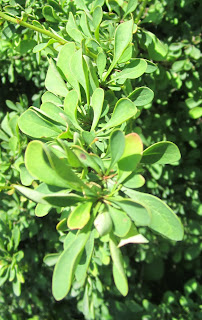 Show proper respect for the thorns of barberry 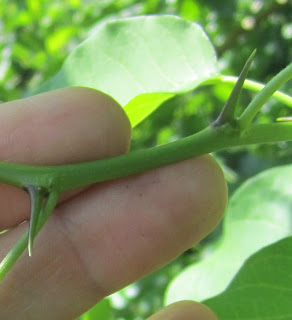 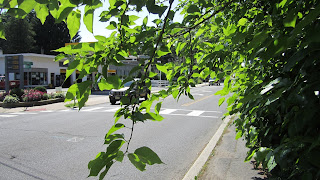 Thrashing your way towards daylight, you may occasionally catch glimpses of a Shell station across the road. If you begin running low on provisions, it's good to know that help is nearby. 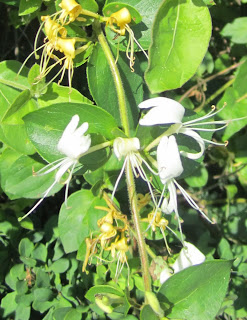 Some liquid sustenance may be obtained from these Japanese honeysuckle blossoms. 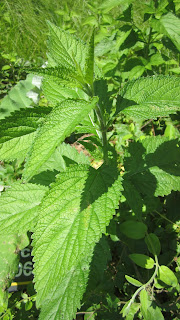 If slow progress forces you to camp for the night, nettle soup could be an option for dinner, 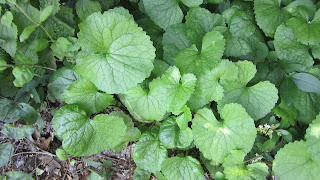 along with garlic mustard pesto. 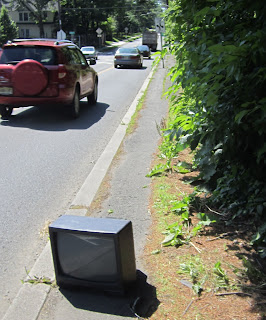 Your campsite comes complete with television. Traffic should keep the bears away, though this is not guaranteed. 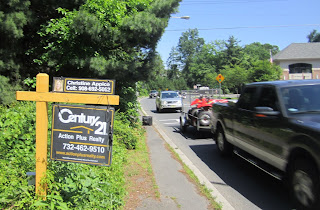 Beating the odds with a mixture of effort and luck, you'll make it through the toughest section with plenty of daylight hours left to reach your intended destination, and can look back with some pride at having conquered one of the most challenging stretches of sidewalk New Jersey has to offer.

Level of Difficulty: Class 4 (large standing waves of foliage, some precise maneuvering may be needed)
Posted by Stephen Hiltner at Friday, June 15, 2012