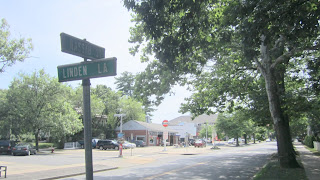 A black bear was seen near this corner of Linden and Nassau last Tuesday evening, according to a "reverse 911" call we received. That's the third black bear to come through Princeton in the last couple months.

A relevant post from last month can be found at PrincetonPrimer that includes this: In spring, the one and a half year olds head out to seek new territory. Bears are highly territorial, and the young bears much prefer to seek new territories than to risk what can be very violent and debilitating battles with already established bears. Princeton's recent visits by bears are of this nature.

There's also a whimsical but useful letter about how to react in the extremely rare case of a bear attack, to be found in the Town Topics and reposted below:

In the description of what to do if you see a black bear, I was astonished to learn that, in the very rare case that a black bear attacks, the best tactic is to fight back. Princetonians have not been called upon to display such courage since 1777, when we all could conveniently claim we had yet to be born.

To bridge this gap between experience and expectation, I herein provide a translation of the wildlife officials’ instructions, customized to fit the Princetonian lifestyle:

Black bears are near-sighted, so make noise to avoid surprising it. If the bear stands up on its hind legs, don’t worry. It’s just trying to see you better. Make sure the bear has an escape route. For instance, if it is following you out of the public library, hold the door open and give it plenty of room. If you encounter the bear in the woods, or on Nassau Street, you can back away slowly, but don't turn your back to the bear. In a calm, assertive voice, put the bear on notice that you are a Princetonian fully armed with opinions, and will not hesitate to express them.

Avoid eye contact. If it doesn't run away right off, bang the pot you happen to be carrying with you, or download a "kitchenware noise" app on your iphone. Bears hate to cook, which explains their interest in garbage. Otherwise, clap your hands, raise your arms over your head, wave a jacket, all of which should make you look large and impressive.

On rare occasions, the bear will do a bluff charge, at speeds up to 35 mph. If a cafe is close by, this is a good time to duck in for a double latte. If that option is not available, then you'll need to dig deep. Fleeing will only make you appear weak. Perhaps the stirring words of a high school football coach will come to mind. In any case, stand your ground, wave your arms and shout. Pretend you're in front of town council, venting your outrage over moving the Dinky. The bear should veer away from you at the last moment, providing a bigger thrill than any 3D movie at the mall.

If the bear actually attacks, which is extremely rare, it's time to drop all remaining pretense of civility. Fight back. Don't worry about the bear's lack of access to dental care. Without asking permission, bop it on the nose. Bears' noses are 100 times more sensitive than ours. Use this sensitivity to your advantage, all the while reveling in what a great story this will make to tell the grandkids.

In case you surf the internet for more info, don't be confused by accounts of how to behave when encountering a grizzly bear out west, where the protocol is completely different and not nearly so gallant.

Update: A friend just back from the Boundary Waters area of northern Minnesota told me that a woman was attacked by a black bear up there, and had successfully gotten it to go away by punching it in the nose.
Posted by Steve Hiltner at Sunday, July 15, 2012