The Sky Tells A Story

People who toil to change the world become so used to pushing against walls that they forget to adequately savor the small victories that come along now and then. That happens to be the first person singular form of "they", but it's a common tendency. Add to that the frenetic tempo of life and, truth be told, you find a lot of lawn chairs, hammocks and other shrines to relaxation attracting little more than bird droppings and tree litter in the backyard. 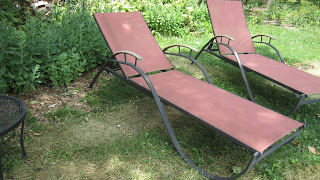 In recent weeks, though, I've occasionally been inclined to recline, abetted by the acquisition of some chaise lounges. I snatched them off the curb one night, worried that they might otherwise fall into the wrong hands and lead a more vulnerable soul into a life of elegant indolence.

The other evening, satisfied with the results of a project just completed, I decided some repose was in order, and put the new acquisition's reclining capabilities to the test. 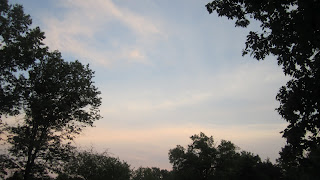 The sky, with its subtlety and vastness, came as a surprise.If not for fatigue and a reclining chair, the sky might go unnoticed altogether. Its symphonic works of cloud and color are largely blotted out by tree canopy, chopped into fragments of little meaning or power, while we busy the eyes and mind with matters beneath the trees. How are we to be reminded of being mere specks in a big, big universe if we have no vista by which to see it? 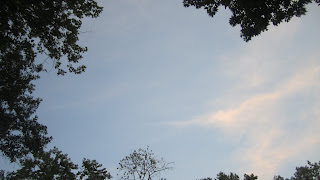 There, before me, framed by trees, was the evening's unexpected cinema. Very experimental, with no clear plot, action or character development. It's best to have no expectations and be pleasantly surprised. Small winged characters passed across, clearly in a hurry to be somewhere else--a loose pack of blackbirds, and at some point a pair of birds with a distinctive pulsing flight rhythm, a flutter and glide, flutter and glide, until they disappeared beyond the trees. Woodpeckers and their relations fly like that.

Large solitary dragon flies passed overhead, some high up and headed straight to unknown destinations. Others flew lower, turning on a dime, using an Etch a Sketch flight pattern to snatch this or that. Cicadas sang their first songs of summer somewhere down among the trees.


I had expected bats to play a starring role in this evening sky, as they have in past summers, but not a single one appeared to patrol the tree-lined opening at dusk. Since New Jersey's resident bats have been succumbing to a fungus that attacks them during hibernation in the couple caves they all gravitate to for the winter, it's easy to be worried by their absence.

I later contacted Margaret O'Gorman of the NJ Conserve Wildlife Foundation, which has been doing heroic work to save bats from this introduced fungus. Her biologists say the relatively few bats that have survived the past two winters may have some immunity to the White Nose Syndrome, offering hope that the populations can recover. She mentioned an August 4 event about bats at the Allaire Nature Center.

All this takes us far from that little opening in the trees, but that's what a patch of sky can do. Shifting colors imply a distant sunset; winged cameo appearances and no-shows give clues about happenings far off. Leaning back, relaxing, it's still possible to do quite a bit of travel. No seatbelts are needed, just a serendipitous piece of outdoor furniture and a portal to the sky.
Posted by Steve Hiltner at Friday, July 27, 2012