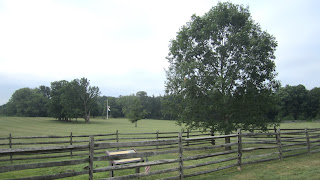 July 19, and it's a quiet scene at the Princeton Battlefield on a weekday afternoon. The Mercer Oak is looking robust in its corral of sacred ground. The immense lawn is getting mowed.

The flag in the distance is at half mast, but I don't suppose it has anything to do with the quiet botanical battles going on. 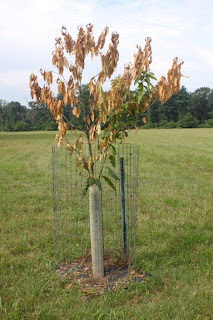 American chestnut, sacked by an imported sac fungus 100 years ago, has been making a slow comeback thanks to breeders who have been patiently breeding native trees with resistance. Four of these hybrids (15/16th native, 1/16 Japanese chestnut) were planted at the Battlefield two years ago by local nut tree specialist Bill Sachs.

He said their chances of being resistant to the fungus are about 50/50, and as it turns out two of the trees have developed the symptoms of chestnut blight. 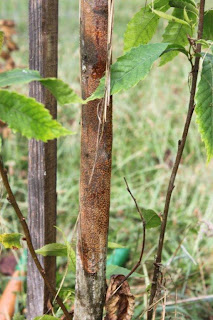 Here's what the stem with the canker looks like. (Thanks to Bill for these two photos.) 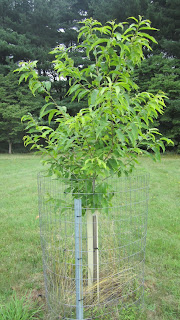 The two others continue to prosper, and have grown to 12 feet tall. That they are growing near infected trees gives some hope that they will prove to have inherited resistance. 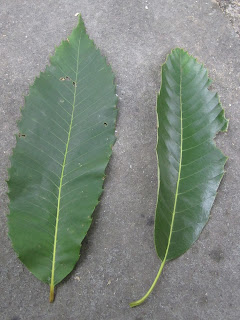 Several mature non-native chestnuts grow near the Clark House. The shiny leaf on the right is likely a Chinese chestnut, compared to the duller surface of the native species. 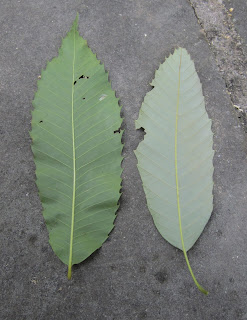 Flipped over, the Chinese chestnut leaf has a silvery tinge. 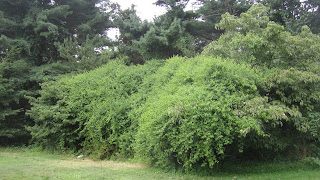 Another battle is going on where two flowering dogwood trees grow along woods' edge to the left of the pillars. If they haven't flowered as profusely in recent years, it may be because they are being completely overwhelmed by what I call "the kudzu of the north", porcelain berry. 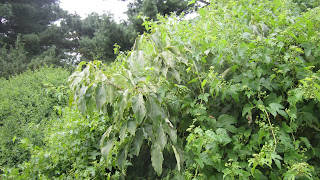 Judging from this one small branch reaching out from the thronging vines, like a hand pleading for help, the dogwoods are not far from a full surrender.

Another dogwood close by is getting overwhelmed by wild grape.

Three beautiful dogwoods could be saved by five minutes of horticultural heroism with a pair of loppers, but I doubt anyone has even noticed this botanical battle in full swing. We see here a theme reenacted endlessly on our public lands. The voluminous grass gets mowed, some weeds get whipped, but any maintenance task requiring plant knowledge is left to chance.

A fuller story of chestnuts in Princeton can be found by searching this blog for "chestnut", or clicking on this: http://princetonnaturenotes.blogspot.com/search?q=chestnut.
Posted by Steve Hiltner at Wednesday, July 25, 2012