Chickens, Fish and Swimming Pools in the Not So Wild West 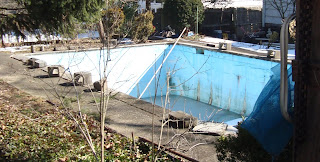 (First posted at my PrincetonPrimer.org site)

Abandoned swimming pools, like this one that has stood empty in a Princeton backyard for years, are a sad sight. What to do with them? Surprisingly, these symbols of high-maintenance leisure are at the forefront of a grow-your-own movement out west. The following is a post on islands of sustainability in the super-heated urban world of Arizona. The last few paragraphs describe a clever adaptation of swimming pools.

My nephew in Arizona always has interesting news about homesteading out west. Raised in a house with a wood stove in Vermont, his career took him away from the warm fire and into the frying pan of Phoenix, where he and his wife are raising three kids, along with chickens and rabbits--all on what sounds like a small residential lot. The chickens and rabbits play the role they once played on a farm, offering a way to sustain a family and do right by the planet.

He says he likes to run nutrients through as many steps as possible before they exit his property. For instance, chicken feed and kitchen scraps become chicken manure, which fertilizes the garden, which feeds the rabbits. At each step along the way, some sort of food heads for the kitchen, be it eggs, garden vegetables, or rabbit meat. The ladies, as he calls the hens, provide sufficient eggs for breakfast omelets and a weekly dose of egg salad. A periodic batch of male chickens, raised from chicks, end up in the freezer. The coop can be partitioned into two, to keep the males and hens separate. Otherwise, the nine hens have the whole coop to themselves.

It sounds like a lot of work, adding a layer of animal care and periodic feather plucking sessions on top of all the effort involved in raising three young kids and making a living. But they are essentially applying to everyday living the can-do spirit that in mainstream society only surfaces briefly during crises. People become heroic, community-minded and resourceful in the wake of (un)natural disasters like Hurricane Sandy, then quickly return to a status quo in which any mention of sacrifice or inconvenience is dismissed with a groan. Meanwhile, the status quo is brewing ever larger and more frequent disasters in the future. By using our formidable capacity to adapt and prevail only during emergencies, we miss the opportunity to adjust our lifestyles in ways that would steer us clear of a dystopian (new word in my vocabulary) future. One positive thing about sacrifice is that one can get good at it, until it hardly seems sacrificial.

Phoenix, actually, is already living in a super-heated dystopian future. Summer temperatures average 100 degrees. Though temperatures may drop 60 degrees at night in the countryside, city dwellers are denied that relief. Because of the heat-island effect, where asphalt and buildings absorb the day's heat and slowly release it through the night, urban nights can remain in the 90s. Opposite of the north woods, cabin fever strikes towards the end of summer. Only in winter do people venture outside for extended periods. How the chickens can survive the heat is something I'll need to ask next time.

The importance of night-time temperatures will become increasingly noticeable in New Jersey as summer temperatures rise. Attic fans have been one low-energy way to keep a house cool, by blowing the day's accumulation of hot air out of the house and pulling the cool evening air in. As summers get warmer and areas of unshaded pavement expand, the cool evenings and the relief they bring will become increasingly rare. Natural cooling augmented with an attic fan will become less of an option, making people even more dependent on energy-guzzling air conditioners.

In Phoenix, swimming pools are common, while solar panels are rare--the opposite of what you'd expect in a desert. Such is our upside down world, where obvious problems are maintained while obvious solutions are shunned. Part of the reason why solar panels are rare may have to do with Phoenix not being a very comfortable place to live. More transience means less long-term investment in one's home, which means people are reluctant to sign a 20 year lease on solar panels, knowing they'll have to then find a buyer willing to assume the lease.

Some people, feeling a bit guilty about having a swimming pool fed by unsustainable water supplies, have begun converting them into highly productive habitats to grow food. A chicken coop is suspended over the pool. The droppings fall into the half-filled pool, stimulating growth of duckweed, algae and other plants, which in turn are fed on by tilapia. The water, which would otherwise get fouled with excess nutrients, is then pumped through a hydroponic garden where plants extract nutrients. Solar panels power the irrigation system. There's info about these systems on the web, including this post and video, produced with some support from Whole Foods Market.

Closer to home, a similar approach is used by Will Allen and his GrowingPower group in Milwaukee. Will has visited Princeton a couple times to give presentations.

My nephew hasn't converted his swimming pool yet. There's a difference between having a chicken coop in a corner, and converting one's whole backyard into a minifarm. Still, this pushing of the sustainability envelope suggests there's hope for abandoned swimming pools after all.
Posted by Steve Hiltner at Saturday, February 16, 2013