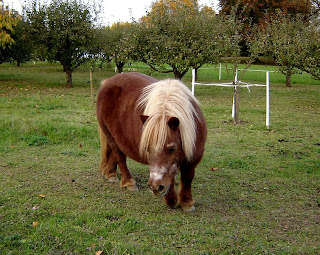 Approaching the Veblen House neighborhood on Herrontown Road near Snowden, I saw a man and boy in the distance, walking down the road with what looked like an improbably large dog. As we approached, the dog turned out to be a Shetland pony walking calmly beside the man. (This photo is a public domain domain photo from Wikipedia.)

Always interested in any farmlike activity out that way, I parked and ran back down the road to say hello and find out more. The man said hi and then turned away, less than friendly.

With uncanny timing, a big pickup truck came to a stop in front of us, at the corner of Snowden and Herrontown, and a man got out. I recognized him as Princeton's animal control officer, who had helped me get some raccoons to move out of the Veblen House attic some years back. He asked the man with the pony whether he had a permit. "This is not a horse," replied the man. "I wasn't born yesterday," responded the animal control officer, "That's a horse."

It turned out the man had a permit, and the necessary three acre parcel to keep the pony on.

I had hoped for a more positive, informative encounter with the pony's owner, perhaps a photo-op with the beautiful beast (more attractive in coloration and thick mane than the above stock photo) and a story of how they came to have a pony, and whether they put it to some use. The story on the internet is that Shetlands are very intelligent and as strong as their broad bodies and thick legs suggest. Given their abundant hair and small stature, it's not surprising that they developed on islands off of Scotland, and were used for work, including in the tight quarters of coal mines to pull wagons.

Another miniaturized island creature is the key deer, which still has enough habitat to survive on the Florida Keys. The female grows barely beyond two feet at the shoulders.

As global habitat shrinks, perhaps all creatures should shrink as well, including humans, to fit into tighter and tighter spaces. Farms could be shrunk with dwarf fruit trees, pygmy goats, bantam chickens and Shetland ponies pulling miniature wagons of miniature produce, but humans will have to be content with shrinking their footprints.
Posted by Steve Hiltner at Sunday, February 17, 2013