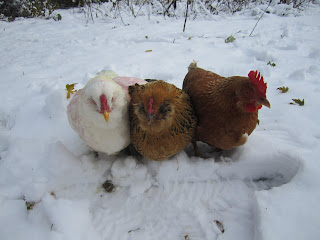 Start asking around if chickens are allowed in Princeton, and you're likely to get a different answer each time. I worked my way from friends to township and borough zoning officers, and finally to Princeton's animal control officer, who seemed to have the most definitive answer.

The quick answer is that they are allowed, but for anyone considering having them, it's worth knowing some of the background.

What little is written in the ordinances is not very encouraging. Even though the borough and township have consolidated into one Princeton, their respective ordinances still apply until a unified ordinance is worked out.

For those living in what was the borough, the most relevant ordinance reads: "Keeping domestic animals as pets; provided, that not more than five animals over six months old shall be kept on any lot, and that no animals except dogs or cats shall be housed or penned within fifty feet of any street line or lot line, except within the principal building." (Boro Code: Land Use, XI:Zoning, 17A--228 Uses permitted as of right, C--accessory uses, 3)

Staff I spoke to do not think of chickens as "domestic animals", and interpret the ordinance as not permitting, or at least not relevant to, chickens.

I'm told that the township ordinance says that chickens can only be kept on lots of three or more acres. An internet search led to this item in the township ordinance: Sec. 10B-276 states: "Farm buildings such as chicken houses and stables and barns, and educational buildings such as classrooms and laboratories which are difficult to convert to dwellings may be so placed without zoning lots." (I think this means that you don't have to subdivide your lot to have a coop, which makes sense.) There may be some regulations about the type of coop one constructs. A structure that is affixed to the ground may come under some restrictions, whereas a mobile coop (coops with wheels, like a big wheelbarrow) does not.

Even though the ordinances appear to discourage having chickens, the informal, unified policy according to the animal control officer allows them. The informal policy, which I was told is okay to post, is this: Anyone can have chickens, in township or borough, without having to register, but if neighbors complain then some sort of action has to be taken, either to correct the problem or to remove the chickens. There is no particular number restriction. There was no mention of how close the coop could be to the property line.

For example, someone on Linden Lane, who has since left town, had chickens, but a rat problem developed. The animal control officer advised the owner on how to clean things up, and she was then able to continue to have chickens. Someone else had ducks, which the officer says are messy birds. They were making too much noise and were frequently flying over the fence into the neighbors' yards. The ducks had to be removed.

Everyone I spoke to in town government was fine with the public schools having chicken coops, as long as the relevant principals and the superintendent buy in to the idea and consistent care can be worked out. Princeton Day School has had chickens housed next to its expansive garden, and has found them to be a wonderful education tool. The kids love them, but only some high schoolers who have been trained are allowed to touch or care for them.

Though I had thought of lobbying for an ordinance that would make more official the policy on chickens, the experience of Hopewell Township gives pause. They anguished for three years to develop a chicken ordinance, suffering worldwide ridicule over the rule about visitations by roosters (roosters are not needed for egg production), and then only had two applications in the years since the ordinance has been in place. The Hopewell staff person I spoke to suggested that a better route is to go with a variance--people wanting to have chickens get the support of neighbors and then request a variance.

But what Princeton apparently has is even more flexible. My understanding is that there is no permit required. To avoid the trauma of losing the chickens, one checks with one's neighbors, maybe even gets support in writing, and then proceeds with a modest number of chickens, knowing that the town could make one give them up if they become a nuisance.

My experience is that chickens make wonderful, quiet "pets with benefits" with care requirements somewhere between a cat and a dog. So, if you're considering it, study up, consult with neighbors (bribery with eggs can help), and my sense is that if you run into any problems the animal control officer's first response will be to help try to work things out.
Posted by Steve Hiltner at Tuesday, February 05, 2013