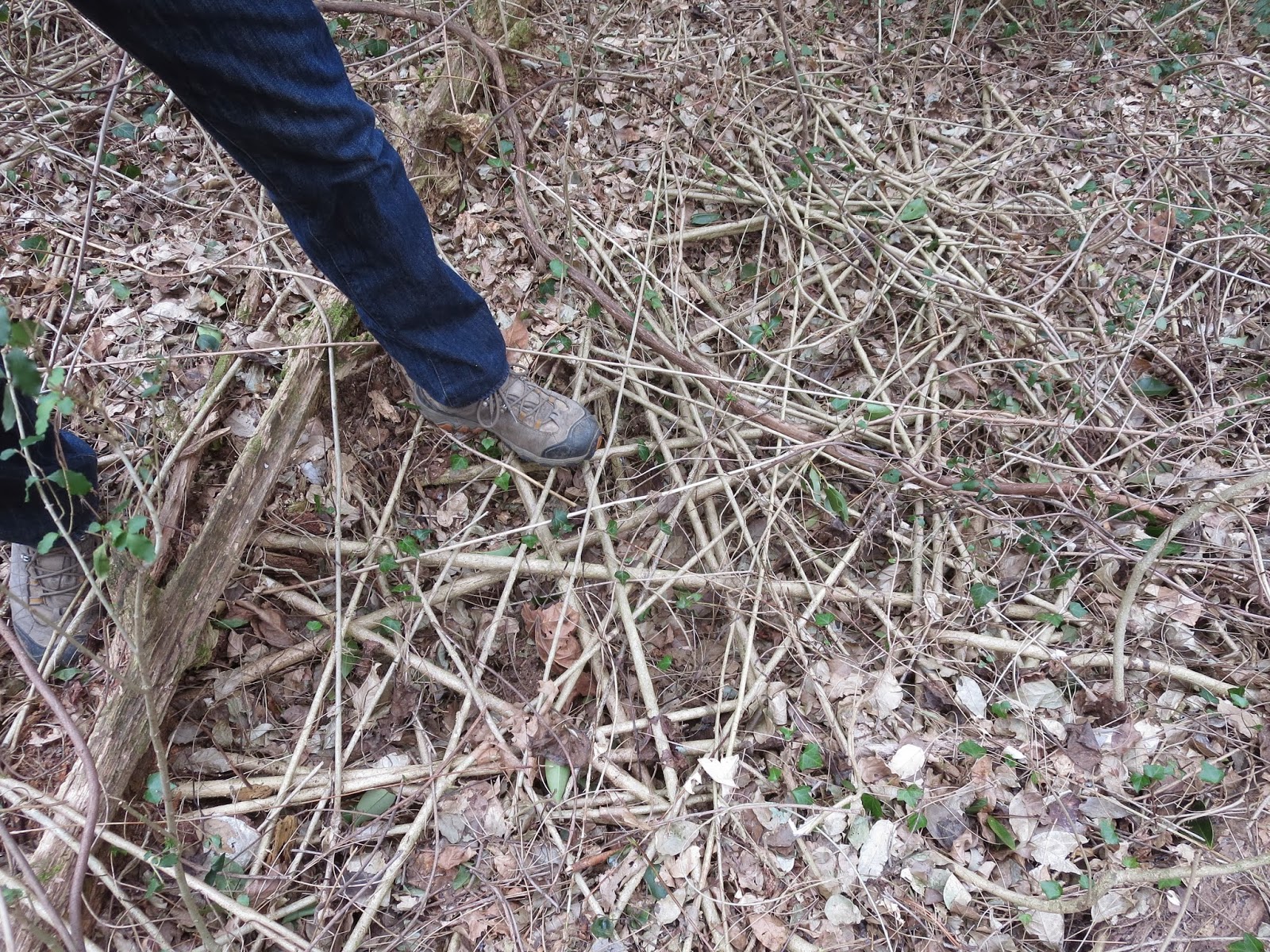 Perhaps we'd suffer cold more gladly if occasionally reminded of how a warmer climate can power unwanted invasions. Our cold NJ winter may, for instance, be knocking back the pine bark beetles that have been moving north into the Pinelands as the climate warms. And we can be thankful that Asian wisteria is not as aggressive here as it is further south. There's a place I used to live, in Durham, North Carolina, where the wisteria grows so densely you needn't touch the ground when you walk. The lateral shoots make a web on the ground, while the vines reach up and rob the trees of sunlight. 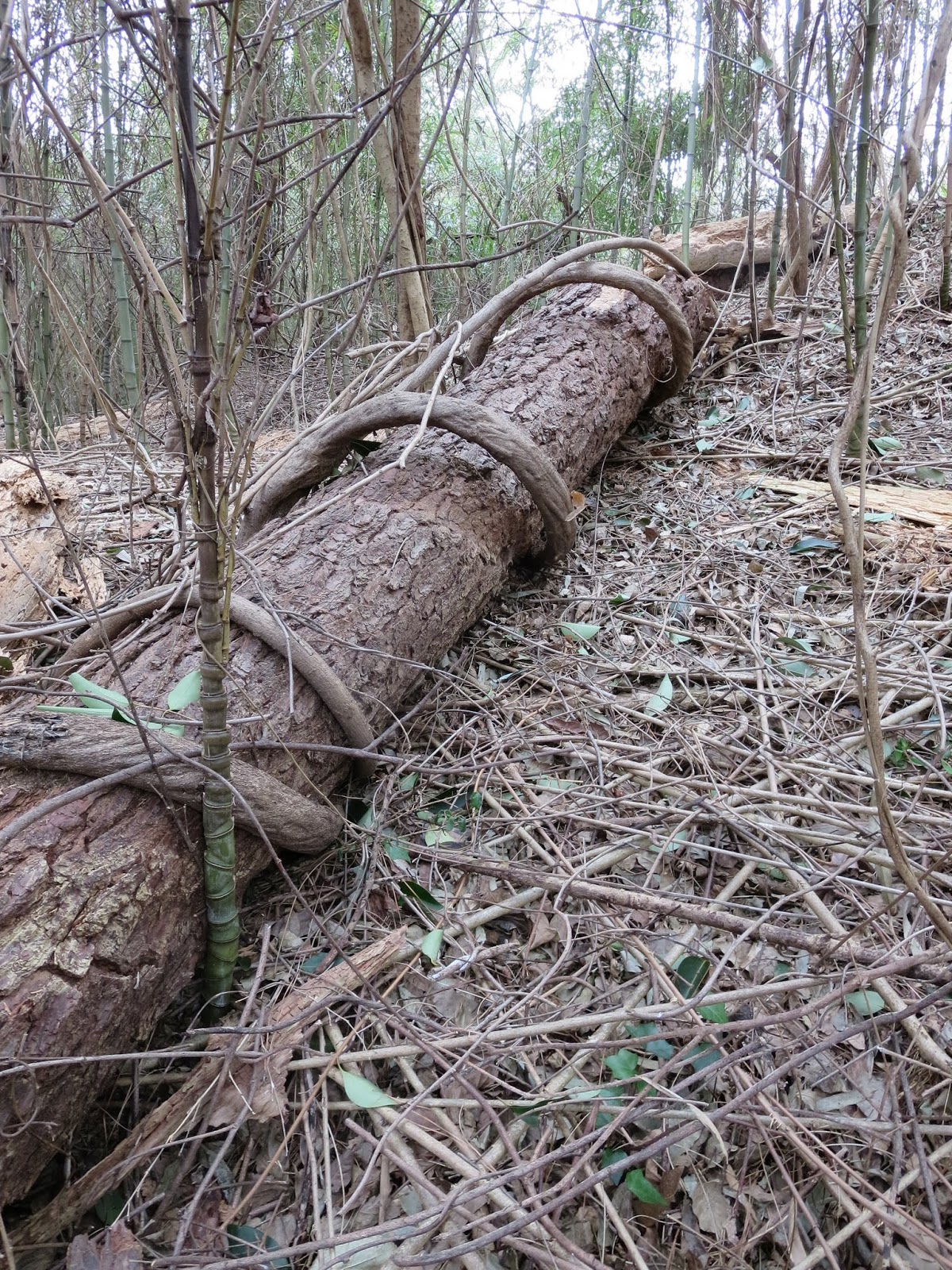 Whole trees collapse, weakened by the weight and lack of sun. The wisteria, which probably started as one small plant brought home from the nursery long ago by a neighbor, has over the intervening decades invaded several acres of woodland that the homes back onto. 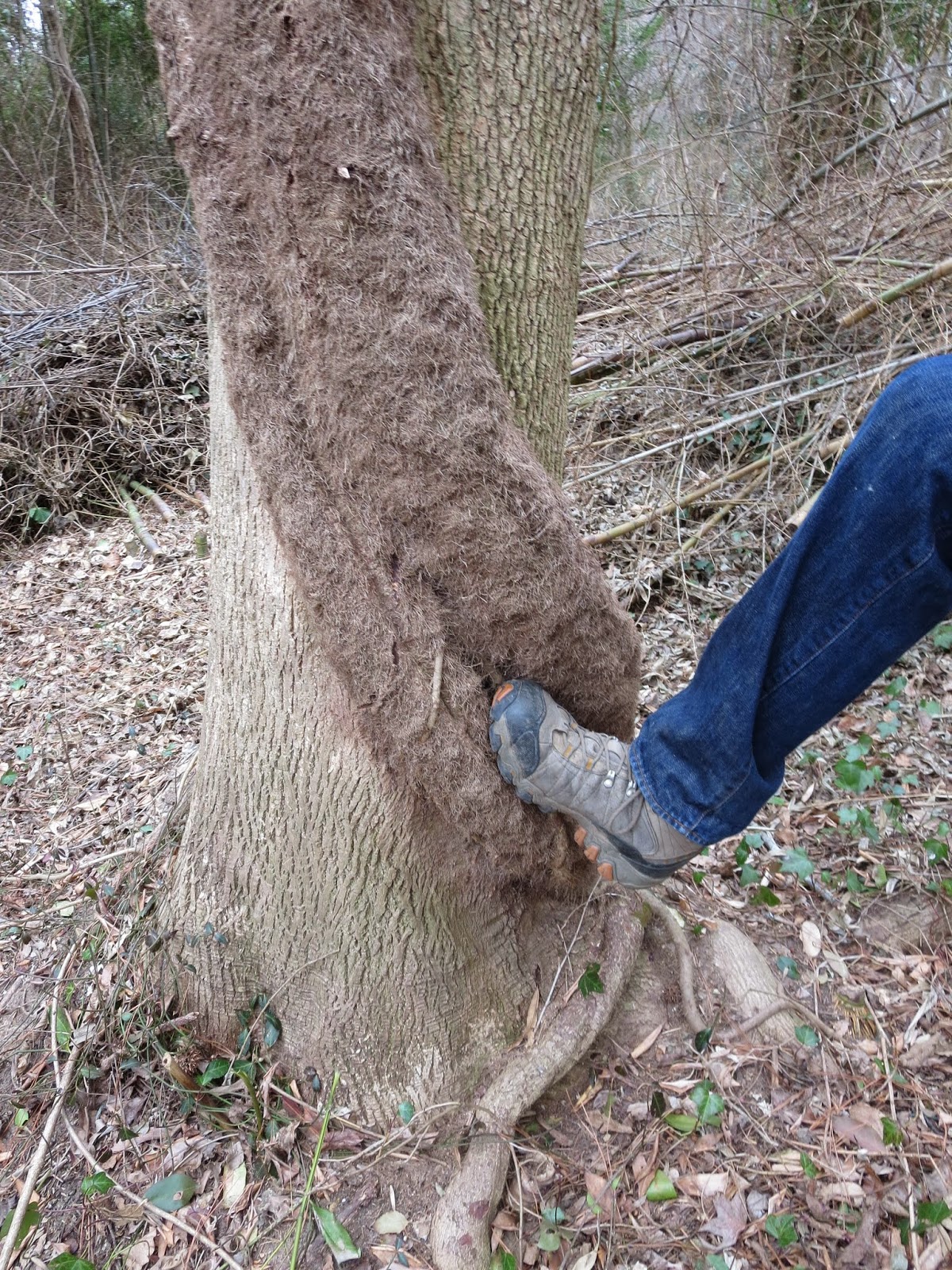 Now a 17 acre nature preserve, the woodland displays an exaggerated version of the classic eastern woodland profile--native trees with a mostly exotic understory. Most of the non-native invasives can also be found in NJ, but behave less aggressively because of the cooler climate. Here's a very robust climbing Euonymus, whose hairy stem rivals that of poison ivy. 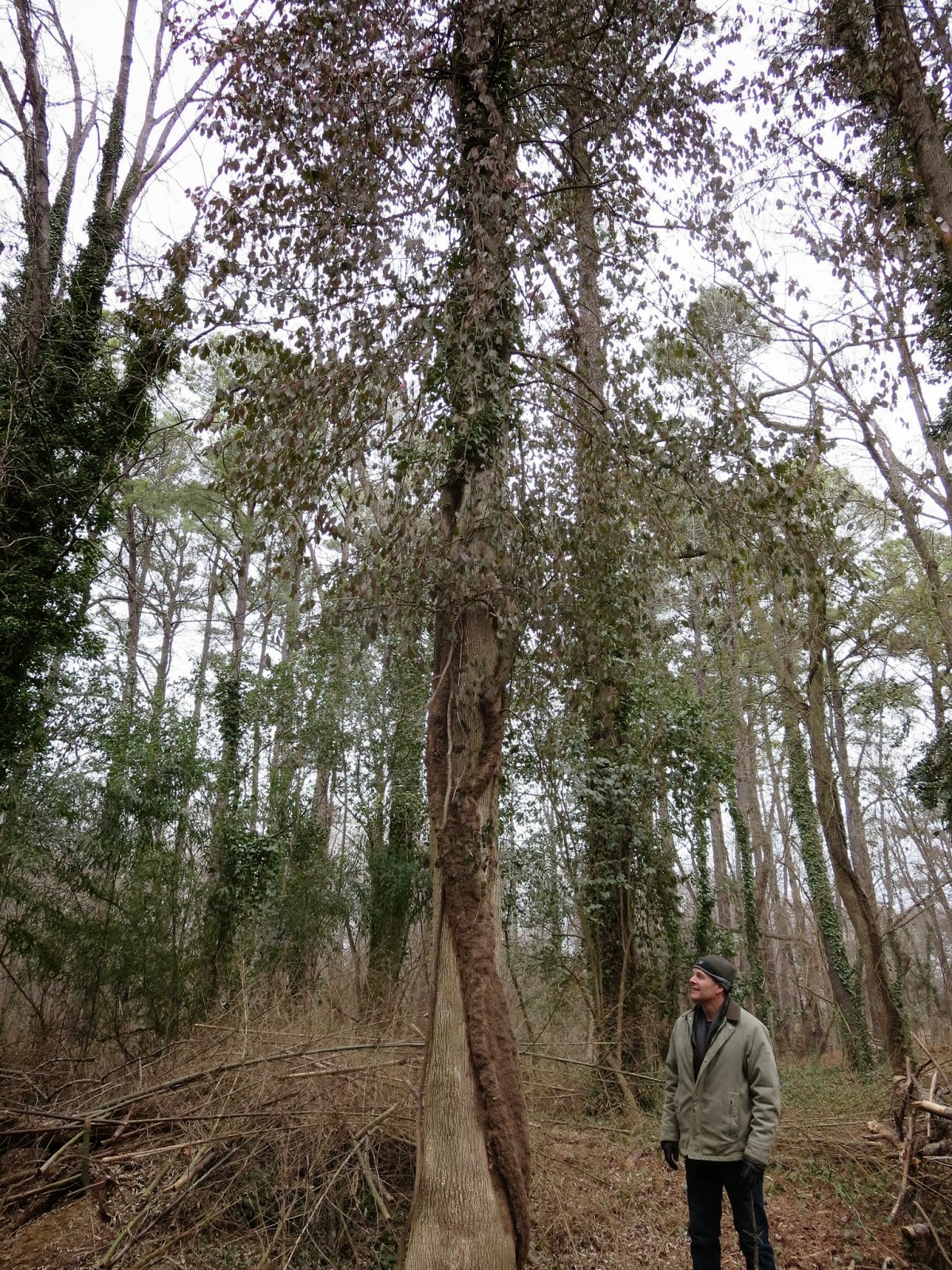 This tree's branches are actually the lateral shoots of the Euonymus vine.

Elsewhere in the preserve are extensive swaths of Vinca major, English ivy, bamboo and privet, growing so densely that native understory species have little chance of surviving. The preserve was free of Japanese stiltgrass until its seeds hitchhiked in on the tire treads of vehicles brought in to do emergency repair on a sewer. 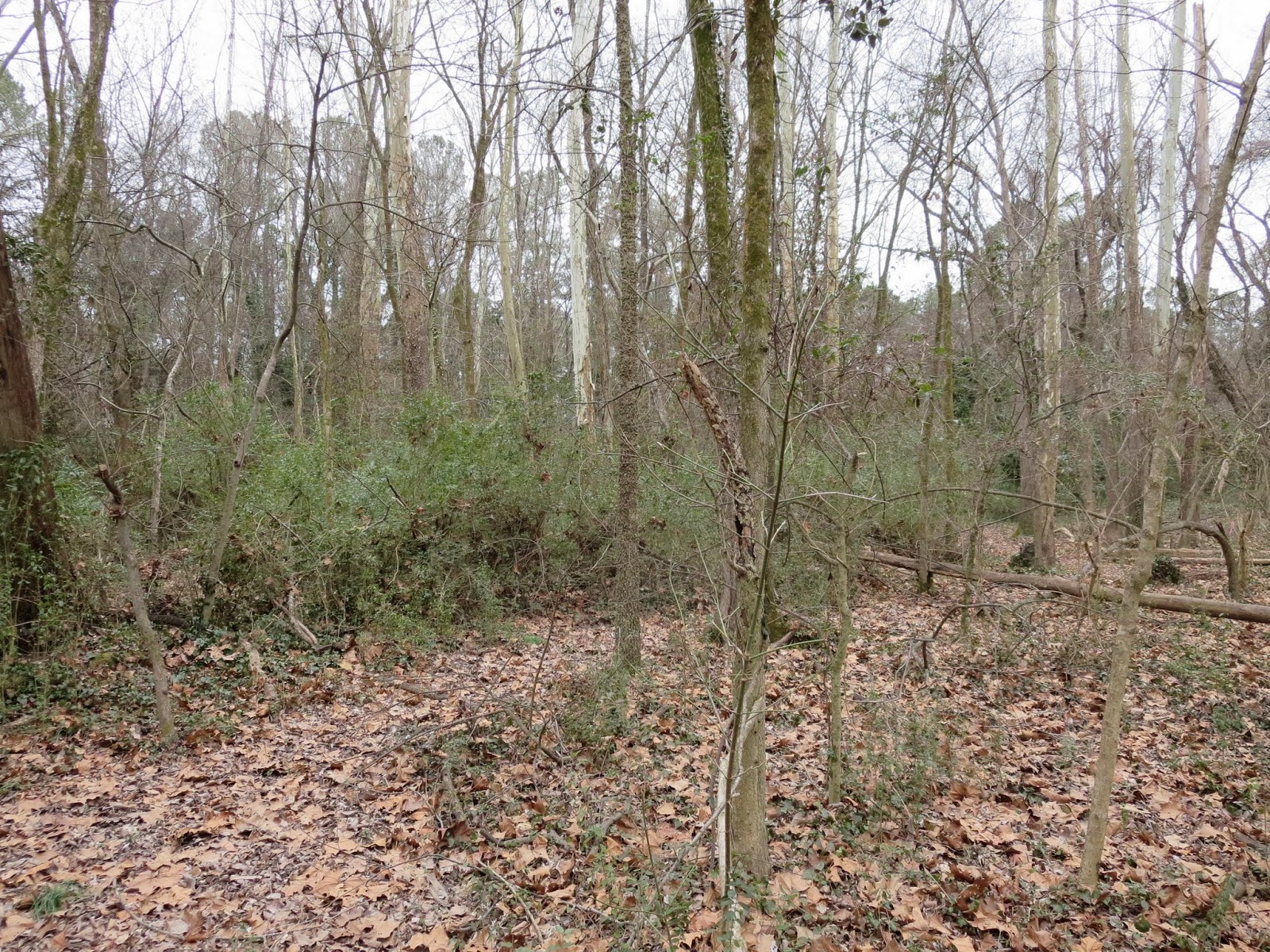 My friend Perry has been leading workdays to remove the thick stands of privet in this floodplain woods. On the left is before, on the right is after. Invasives removal creates pleasing vistas, safer trails, and sometimes leads to the discovery of a few solitary native shrubs that have been hanging on despite all the competition, such as hazelnut and blackhaw Viburnum.
Posted by Steve Hiltner at Saturday, February 08, 2014