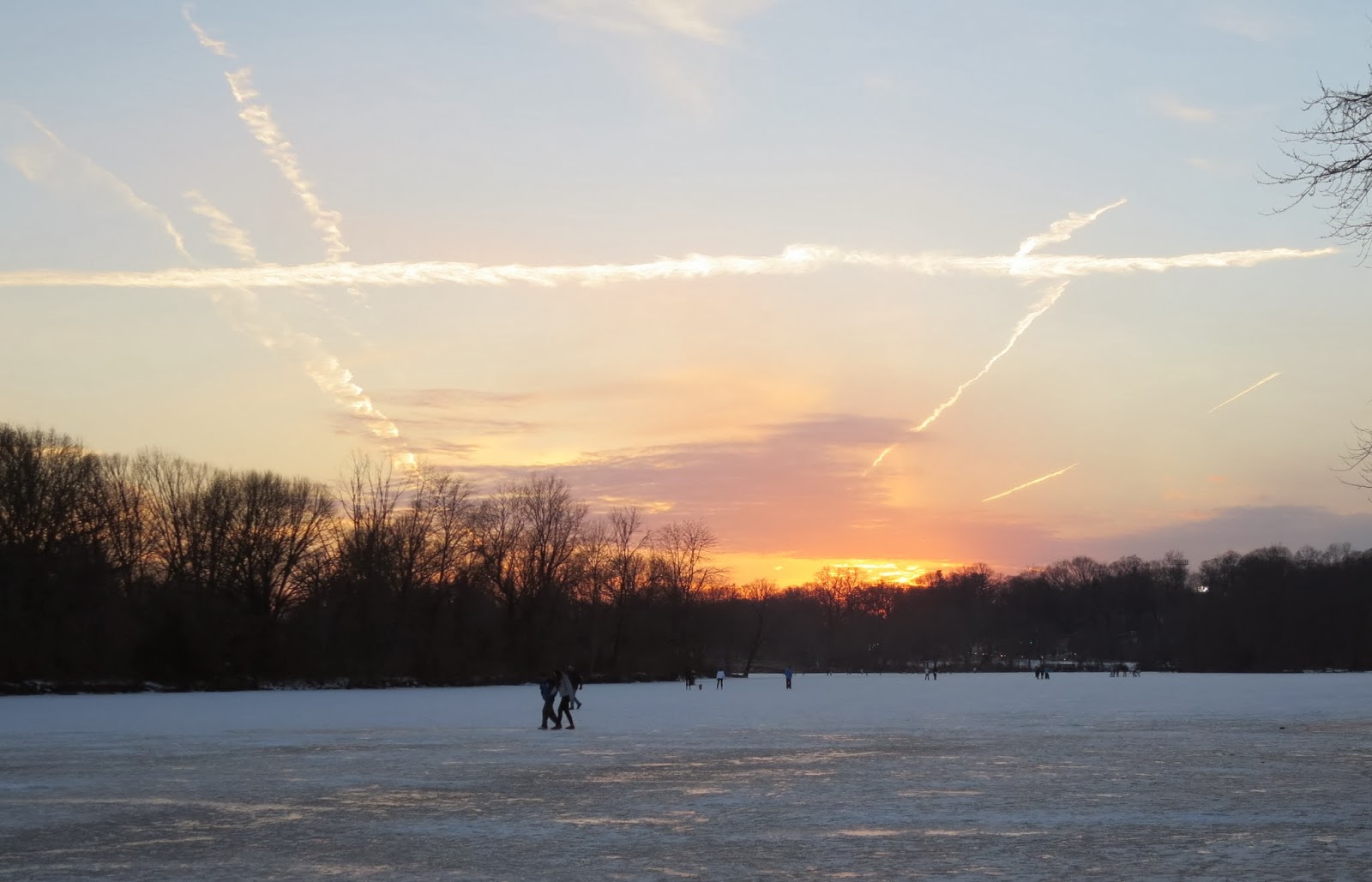 Two days ago, I stepped out onto the ice on Carnegie Lake just in time to catch the sunset over the Washington Road bridge. Jets, like metal blades on ice, had left their etchings in the sky, to catch the sun's last rays. I skated towards the sunset, unaware of the inner journey about to be taken. 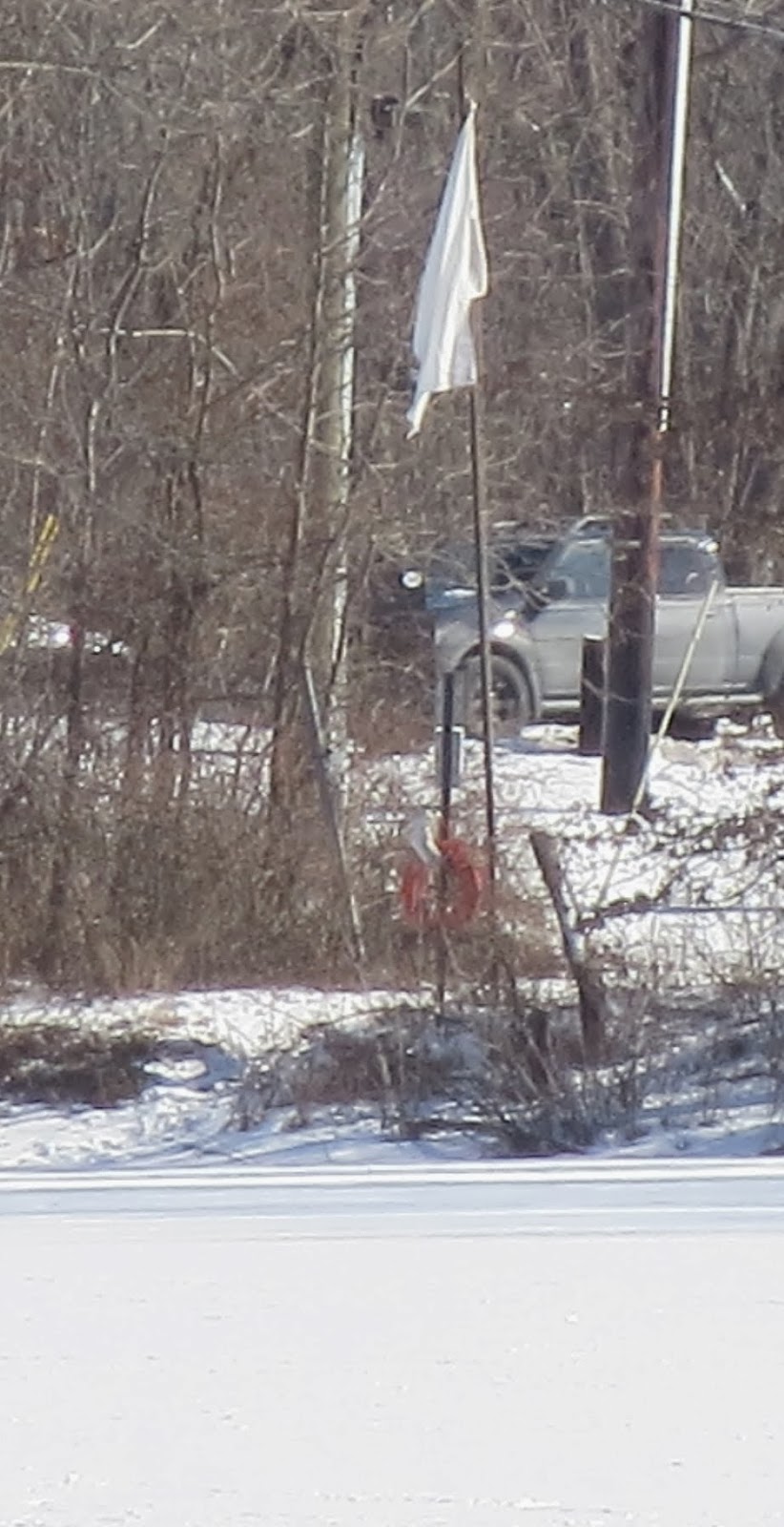 The white flag at Harrison Street had been signaling for three days that it's time to surrender to your long dormant desire to ice skate. 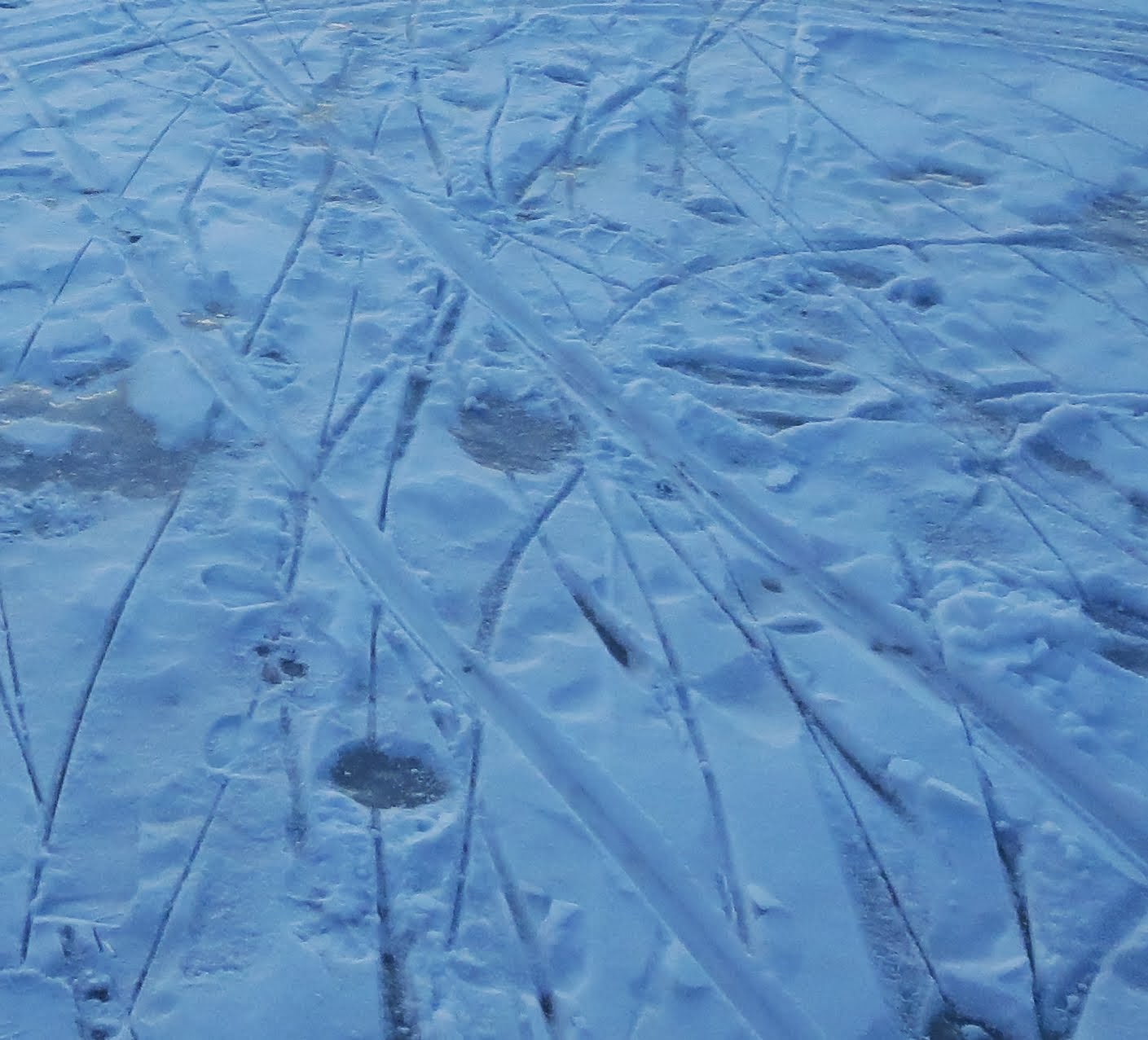 Princeton's response to winter's call was etched in the light dusting of snow. This is sustainable skating, the sort that doesn't require digging up ancient fuel to run the machines to make the ice or to erect and maintain a building around a rink.

A Carnegie Lake frozen thick, shore to shore, is the work of nature's refrigerator, for which we have so much to be grateful, despite the discomfort of the cold. There are the glaciers that act like slow faucets in summer, feeding rivers that quench the thirst of millions of people and all other life. There are the giant ice sheets perched on the bedrock of Greenland and Antarctica, parking water that would otherwise flood out our coastal towns and cities. And there's the floating ice so important to polar bears and penguins at their respective ends of the earth. 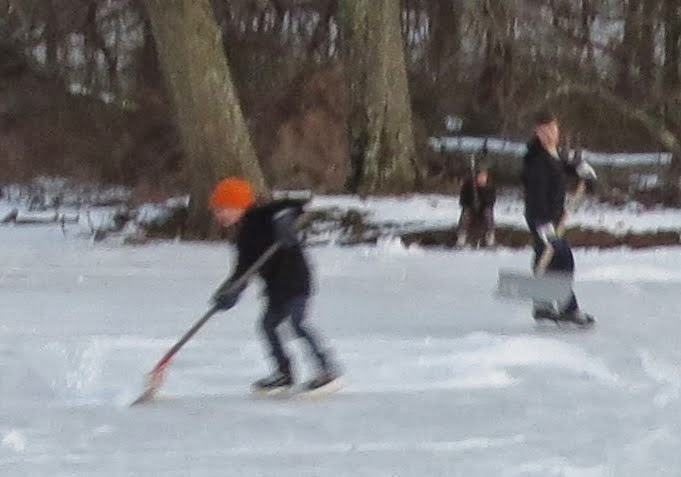 In low light, my camera painted a father and son clearing a new rectangle of ice for a hockey game. Skating makes even the shoveling of snow a graceful activity. 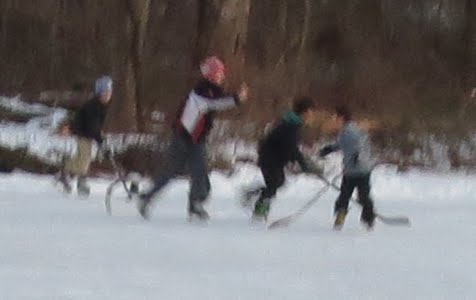 Slowly the frozen scene worked on my mind, thawing out memories of a youth spent in Wisconsin next to an extraordinary legacy of the glaciers called Lake Geneva. I had googled my home town the day before, and was reminded that the lake was once called "The Ice Capital of the World" for the ice sailing regattas held there. Einstein, too, gets mention for his visit to Yerkes Observatory, which like Princeton is perched above a lake.

You cannot grow up near a large lake and think nature to be static. On the first freezing nights of late fall, the lake would steam, exhaling summer's remembered warmth into the air. If the night was calm when the surface froze over, we'd find the ice smooth as glass when it became thick enough to skate on. Each year's ice was different. On a few special years, the snow held off while the ice thickened, long enough to make the whole lake ours to skate on. The ice sheet was a dynamic system, composed of shifting plates that would push against each other as the ice expanded, forming seams. The lake would emit thunderous booms as build-ups of pressure caused these plates to shift. On Lake Carnegie, the seams are an inch wide, but on Lake Geneva they could be ten or fifteen feet wide--jumbles of ice that looked like frozen rivers running through the ice sheet. One year, the forces of expansion were so strong that the ice sheet acted like a bulldozer, creating a berm of broken chunks of ice all along the shore, eight feet high and twenty feet wide.

The best ice was dark and deep, yet clear enough to let the eye trace bubbles trapped far down in its structure. We'd play pickup hockey with all ages mixed together, no referees, and the only spectators were those who couldn't be coaxed to join in. When I was old enough to skate but too young to keep up, a Canadian doing graduate work at the observatory offered wise counsel. Hover near the goal, ready to catch a rebound and shoot it through. Errant passes would require a pause in the game, as one of us scrambled after the puck skidding far off across the lake on the slick ice. I didn't encounter a manmade rink ringed with boards and glass until years later when we moved to a city one state to the east.

Years after that, teaching outdoor education during a deep New Hampshire winter at Camp Union, we were skating at night on similarly smooth, limitless ice when I saw my first and only UFO. Amidst the dazzling array of stars overhead, I happened to look towards one horizon, some distance above the ridge of trees, and saw what seemed like a bright planet where one hadn't been before. It remained steady in glow for a minute, then, maintaining its position in the sky, it curiously faded into nothing, as if rocketing directly away from our planet at unfathomable speed. That, along with other mysteries, hovers along the perimeter of consciousness like stars populating the night sky. 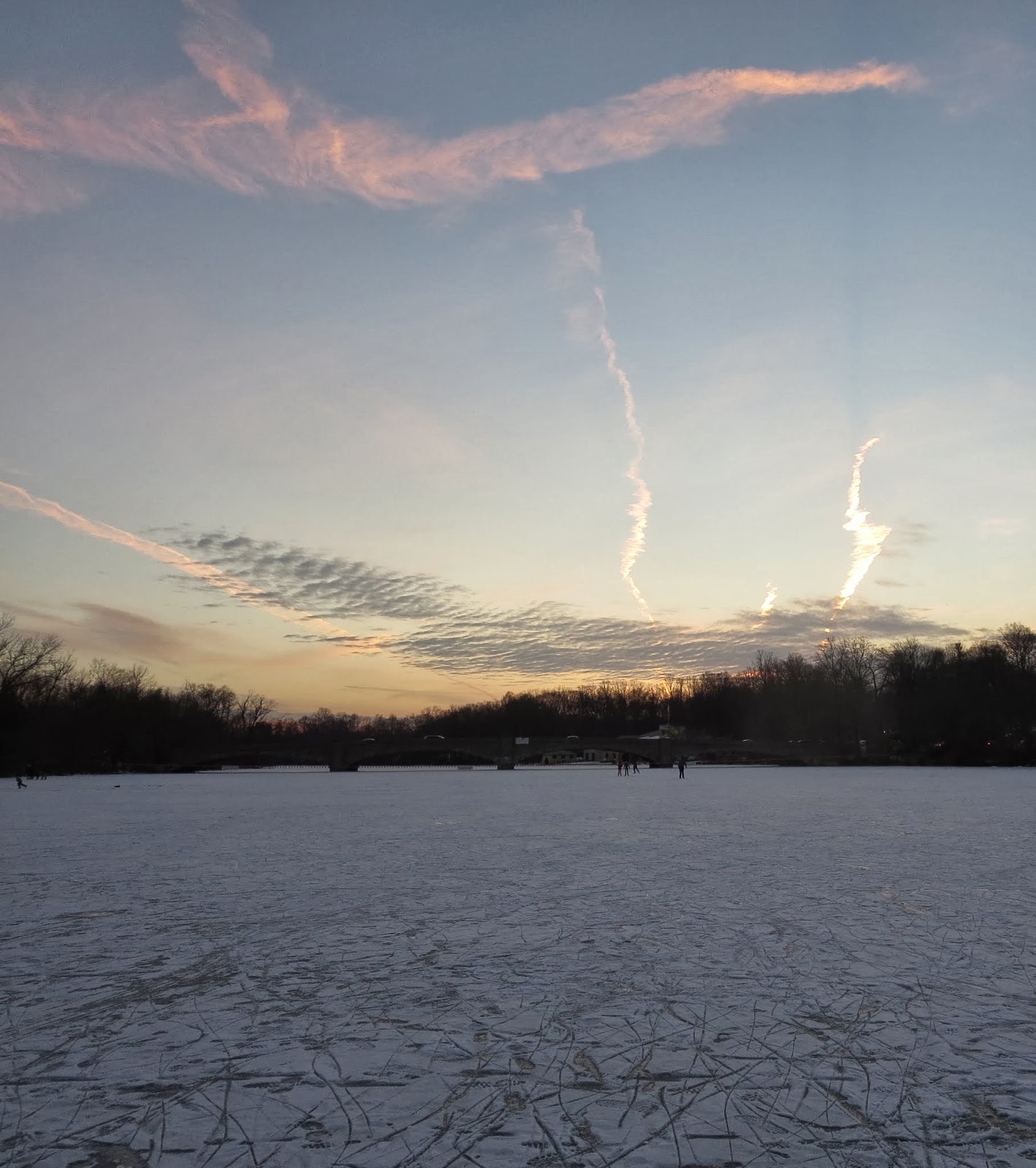 As Carnegie Lake's ice thawed out these memories, my body too was slowly recalling how to skate. There was an initial awkwardness, short strides and cautious turns, but perhaps a half hour in, as the sunset faded to gray, muscle memory kicked in. Knees bent more, strides lengthened, weight began to automatically shift forward or back to fit the motion. Fluid movement returned above frozen water.

At some point, the beauty of that world I once inhabited, glistening expanses of ice beneath radiant skies, began to overwhelm. The skating stopped, and I was overcome by the remembered joy.  After an inward journey back in time, the likes of which had never happened before, my eyes opened to the sight of the Washington Road bridge and a flagged rope stretched across the lake, bearing a sign, "No skating beyond this point". Yes, the sign and I agreed. Best to stop for those upwellings that break through the otherwise solid plane of our day to day existence.

It's hard to say how many people fifty years from now, perched on ice wherever it may be, will have such experiences of recollection. It made me realize how much of our lives is stored in our bodies, and can only be recovered by physically replicating movement. There were more skaters five years ago when Carnegie Lake last froze deep enough to skate on. Maybe the ice was smoother that time, but my guess is that the number of skates in closets has thinned out as the chances to use them become more rare. As the ice grows thin, so will memories.

Several great blue herons flew overhead. Usually, they fly in a straight path, with destination firm in mind, but over the ice they were turning left and right, as if disoriented by frozen circumstance, too young to remember the last time the lake froze over. My daughters resisted going skating yesterday morning--the last chance before warm weather returned--but I insisted, so that they might carry with them some small memory of what it's like to skate on ice stretching so far towards the horizon. It's possible such chances won't come again, but maybe they will. Maybe the jet stream, made slow and saggy by the arctic's melting ice cap, will let more arctic air make extended visits in the future. Global warming brings with it a strong dose of global weirding. What is known is that our skates will stay ready in the basement, and that these last few wintry days have warmed the heart, adding another layer to a rich deposit of memories.