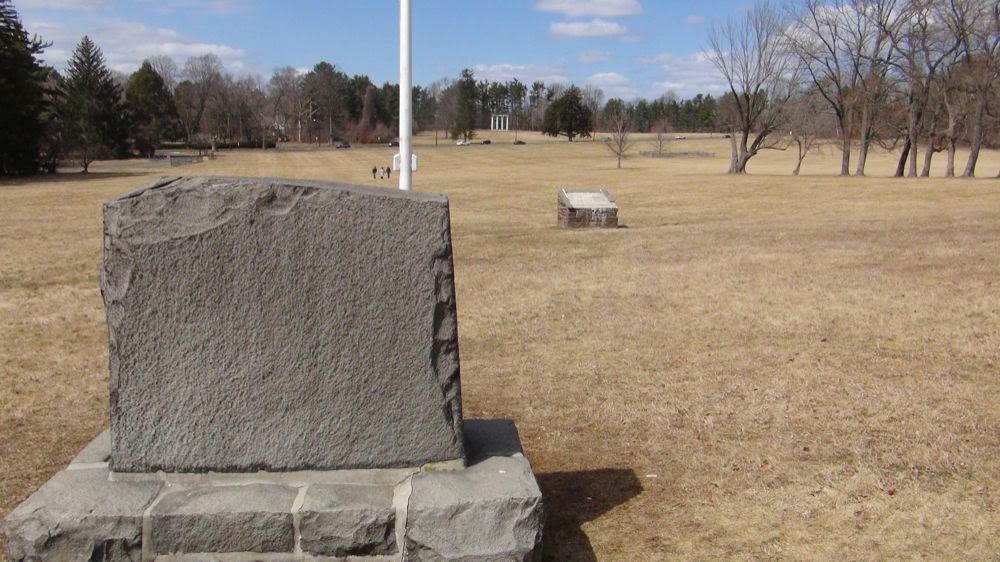 The Princeton Battlefield that people see while driving by on Mercer Street looks peaceful and under control, a broad expanse of closely mowed turf interrupted only by a few scattered trees. Nature is subdued, as on a sports field, the better to have a picnic, fly a kite, or show off the periodic reenactments of human conflict. This Saturday, April 11, for instance, a British regiment will show up as part of the ongoing programming organized by the Princeton Battlefield Society. 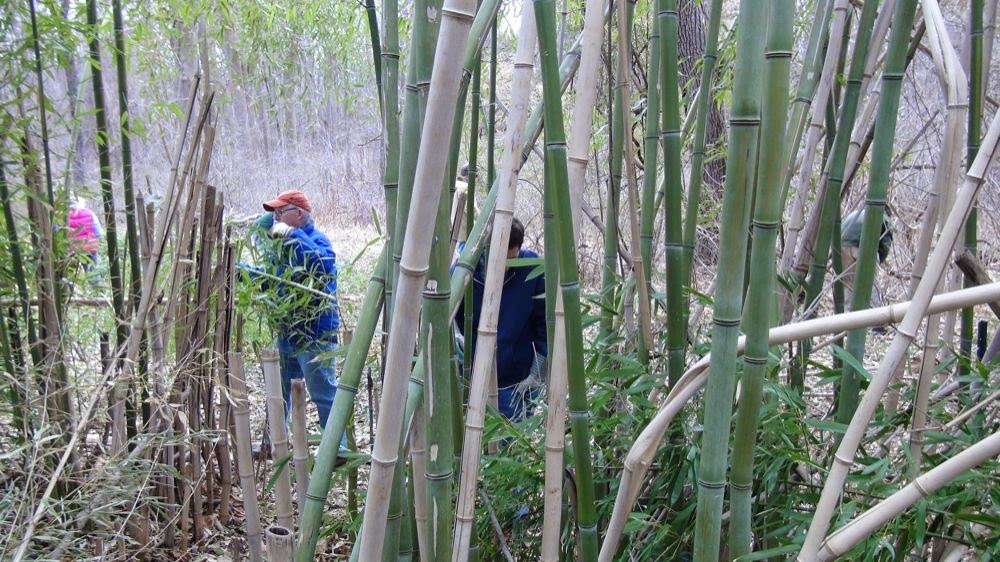 There are, however, real battles going on right now, hidden along the edges of the field. Some pit one plant against another, day after day, breaking only for winter, like the porcelainberry and other vines mobbing the dogwood trees planted back in the 70s to ornament the northern field. And behind the Clark House, a patch of bamboo is expanding its claim to the land. Its encroachment on the trail to the Friends Meeting House has caused the Battlefield Society volunteers to take up loppers and saws against it.

That annual skirmish was waged during March 28's cleanup day, with assistance from Sierra Club volunteers. 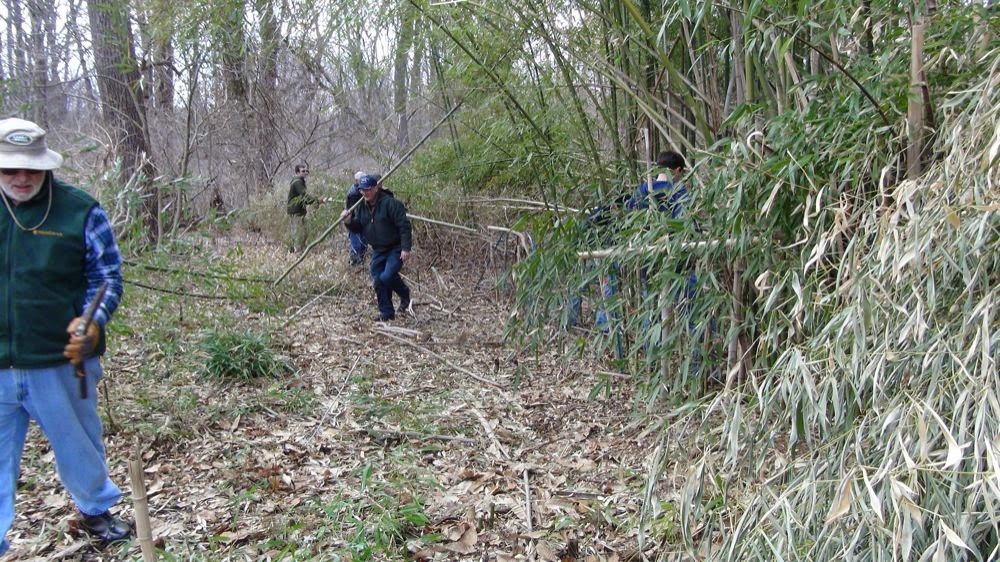 Some were cutting and sawing, others were hauling the 20 foot stalks over to a pile, 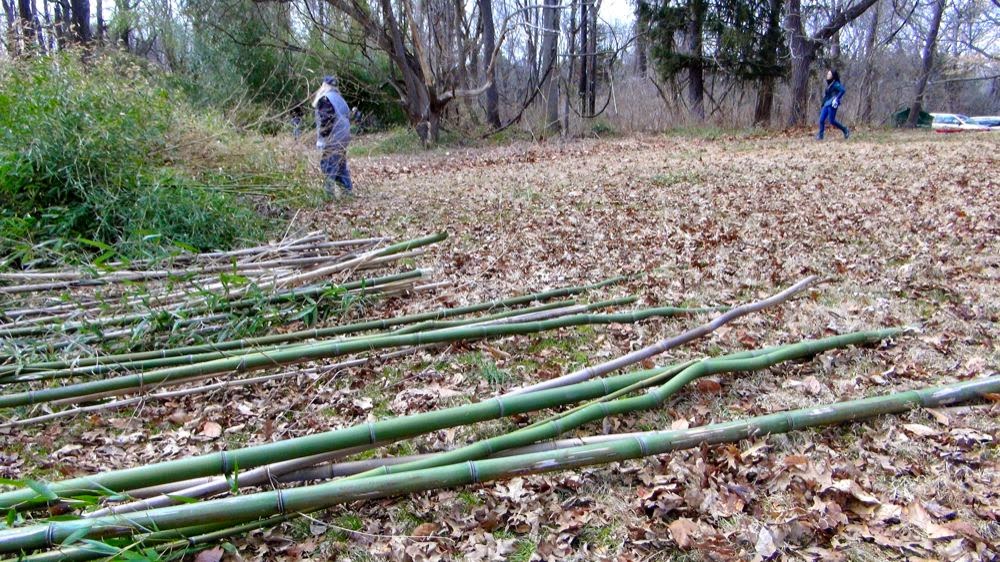 where some stalks were lined up, somewhat reminiscent of what must have been done with the casualties in a real battle.

This comparison of invasive plant control to a battle may be unsettling for some who prefer to associate nature with peacefulness. There are, to be sure, lots of examples of win-wins in nature--the mutualism of pollinators and flowers being the most common example. But even the peaceful appearance of the expansive lawn out front is achieved only through the covert violence of whirling blades in the mowing equipment.

We could say live and let live, and give the bamboo and porcelainberry free reign, thereby providing ourselves with a convenient excuse to do nothing while claiming a superior tolerance towards all other living things. But all gardeners play a game of winners and losers, pulling out one plant so another might thrive. And the plants themselves are not particularly peaceful towards each other. The bamboo with its stifling shade, aggressive roots, and expansionist agenda is the epitome of intolerance, of "not playing well with others". 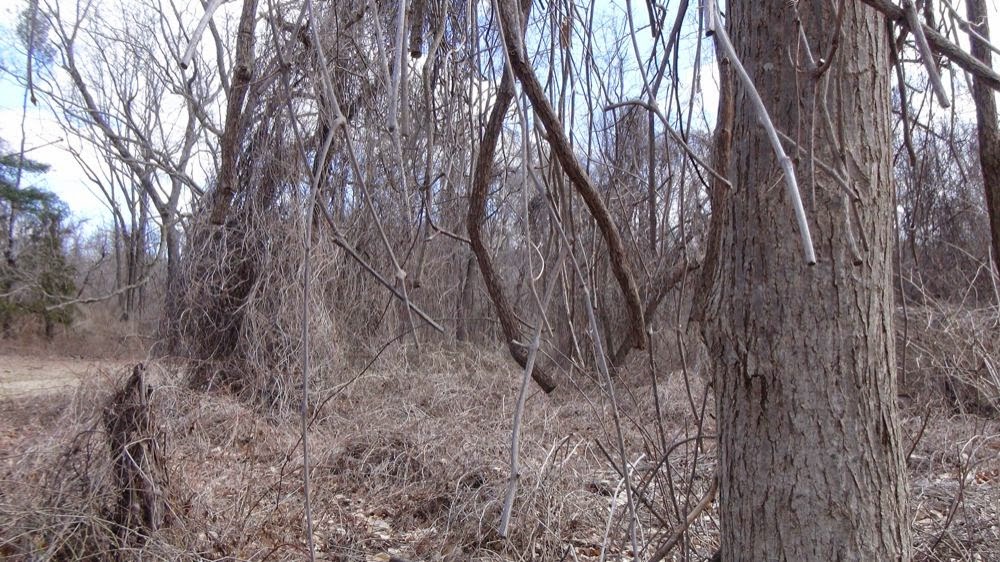 Right next to the bamboo is another example of how laissez faire policies can lead to domination by one highly aggressive plant species. Porcelainberry has turned a small stand of trees into a giant topiary. The vines in the foreground were severed near the ground--an easy way to at least temporarily liberate the tree and cheat the vine of all the solar energy it might otherwise have collected while using the tree trunk as a prop. 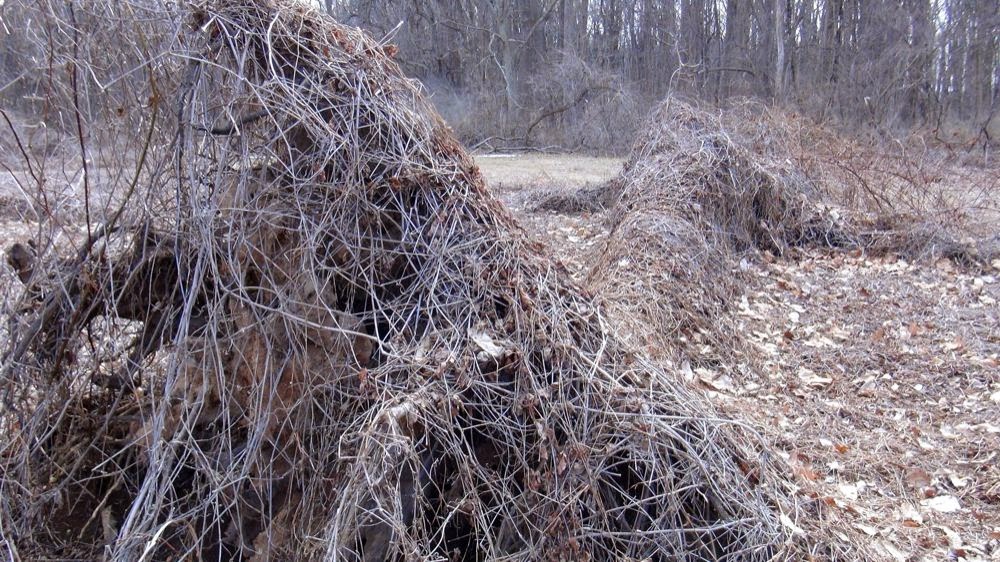 If they're not cut, the vines overtop the tree and grab all the sun. The tree weakens, a strong wind or ice storm comes along, the weakened tree falls. The result looks like the tree was actually tackled by the vine, which in some ways it was.

When I was a kid, we staged battles occasionally. I remember having a tiny cap gun. Sometimes it was cowboys and Indians, sometimes a spontaneous reenactment of the Civil War on the wooded slope near a friend's house. I grew into a peace-loving adult, and yet some aspects of that strategic thinking utilized in war have parallels in open space management. Since an army's fearsome tanks are useless without gasoline to power them, then one way to win the war is to deprive them of fuel by bombing the aggressor's refineries. If they start rebuilding the refinery, don't bomb again immediately but instead wait until they are almost done rebuilding, then destroy it again just before it can produce any gasoline.

That is exactly what the Allies did in WWII, and a very similar approach can be used against bamboo. Cut it all down--completely, every last stem--so the clone is entirely cut off from its solar energy source. Then wait for it to send up new stems. Those stems will rise 5 or 10 feet before sending out any leaves that can start collecting solar energy. Just as the bamboo shoots start sending out leaves, cut it all down again. The roots have spent all that energy sending up new stems, yet will have nothing to show for it. Since the roots are also continuously spending energy just to stay alive, then the fewer leaves there are to feed that demand, the sooner the roots' reserves will be depleted. Stick with this war of attrition, and the giant will be slain. 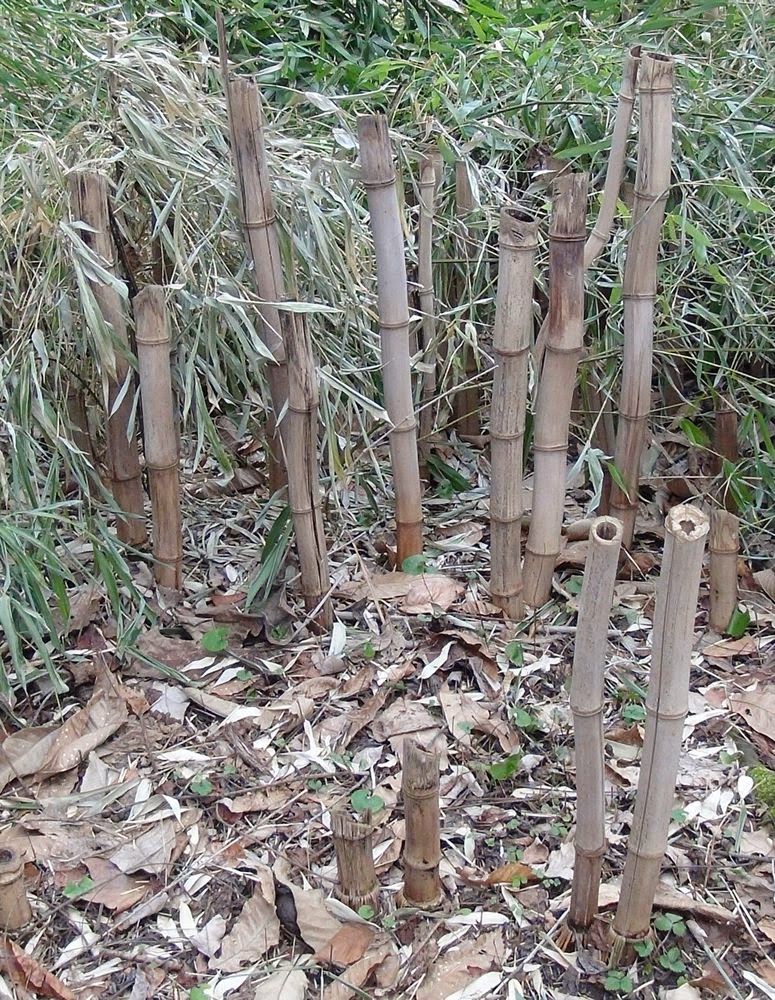 And what will the Battlefield Society do on volunteer days if several strategic interventions in a single season weaken the bamboo so that it is no longer growing into the trail, or into the remains of the old barn? I'm sure there's a long list somewhere. 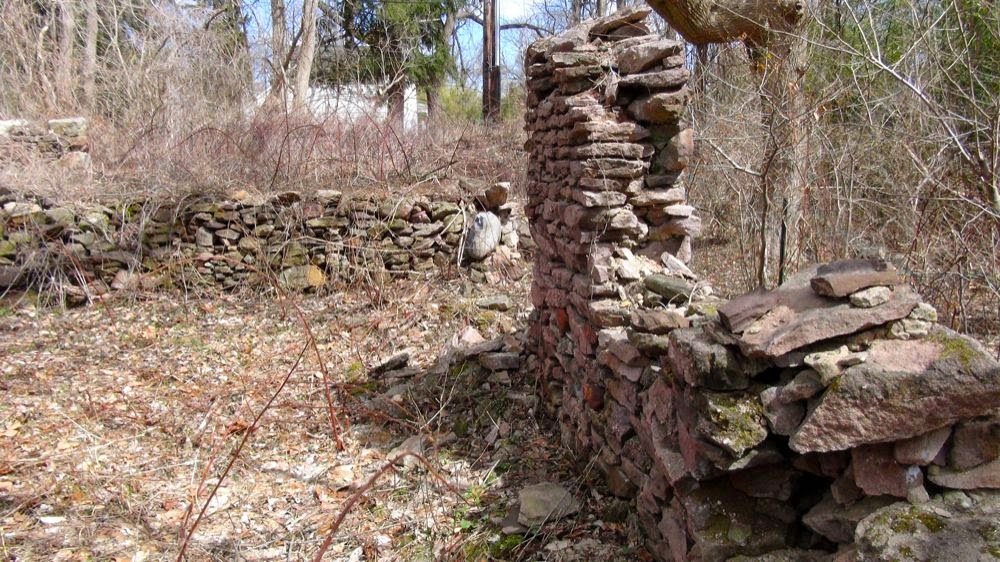 One of the perks of doing invasive species work is that it takes one where one might not otherwise go. I've visited the battlefield many times, but only the fight against bamboo led me to where there are ruins of an old barn. 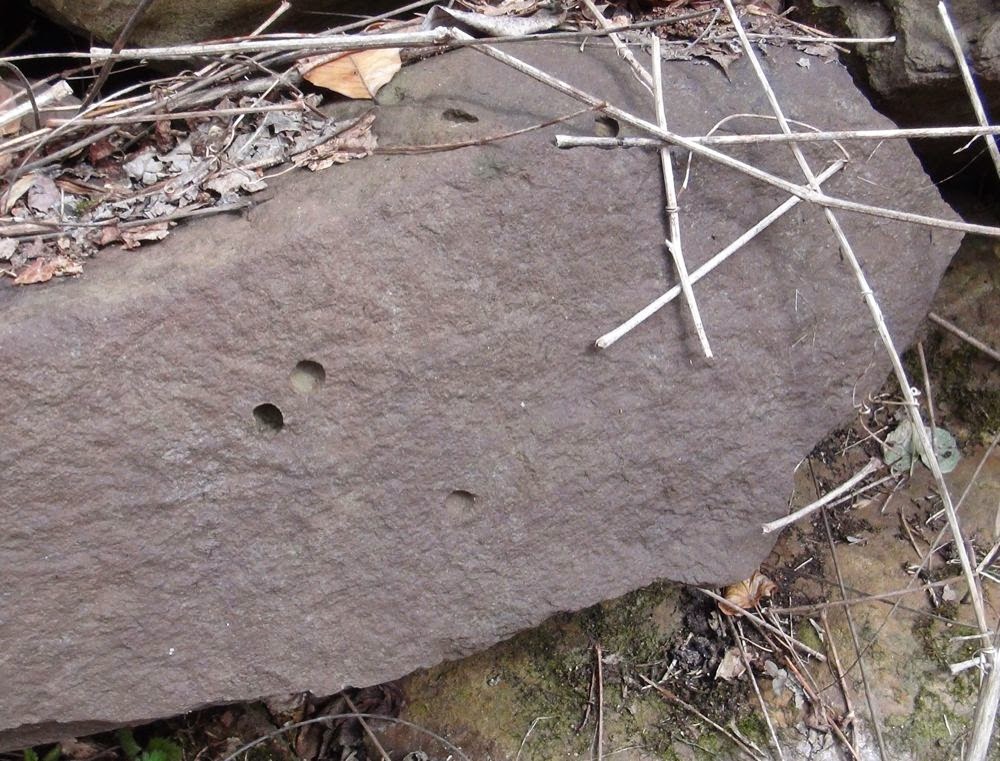 There was a brief timeout to contemplate the possible origin of holes in one of the foundation stones. 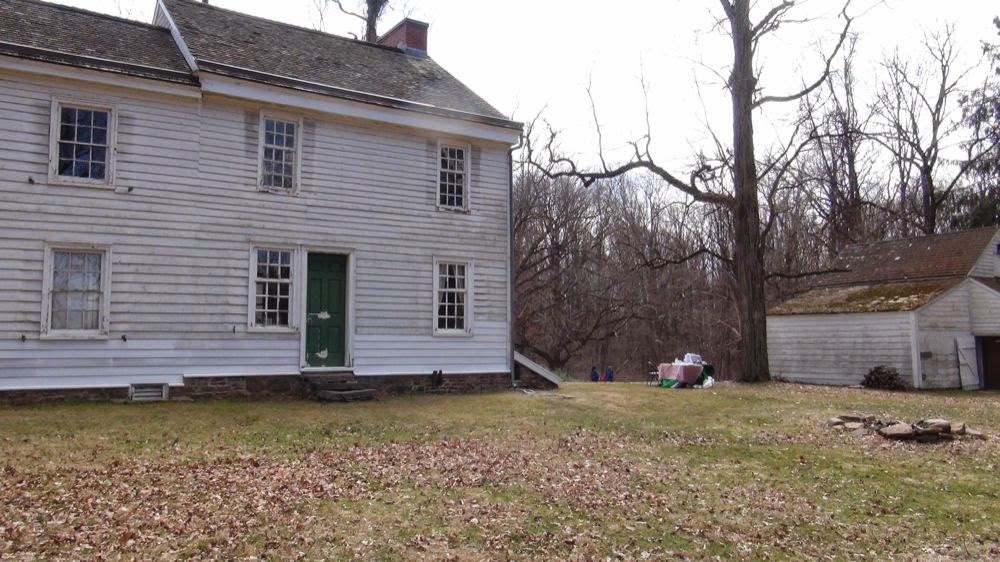 Invasive species removal is one of the few ways we can experience outdoor work, and in some small way reenact the physical exertion once necessary to make this farm a vital enterprise.


Some notes: Bamboo is a grass, like corn or sugar cane or sorghum, or the Arundo donax from which reeds for instruments are made, or the massive stands of Phragmitis that invade many wetlands. Before Rachel Carson wrote about DDT, she wrote about Spartina, the remarkable grass that dominates salt marshes. There's a bamboo native to North America--Arundinarea gigantea--which once formed expansive cane breaks in the southeast. Escaped slaves would hide in them. The native species mostly survives today in names like "Reed Creek" while the exotic bamboos dot the urban landscape. When I lived in North Carolina, I saw the native species only a few times in scraggly remnants.

If you think about it, you've probably never seen bamboo flower. A grove of bamboo will live for many decades without flowering, then flower and produce seed en masse, just before dying. The vast amount of seed suddenly produced by the native cane must have overwhelmed the capacity of wildlife to consume it, though some sources suggest that two lost bird species--the carolina parakeet and the passenger pigeon--were able to make the most of these rare bursts of abundance. I saw a flowering and sudden dieback of exotic bamboo in Durham, NC once, when a patch covering a whole city block flowered and died. There are a lot of homeowners in Princeton who wish their bamboo would do the same.