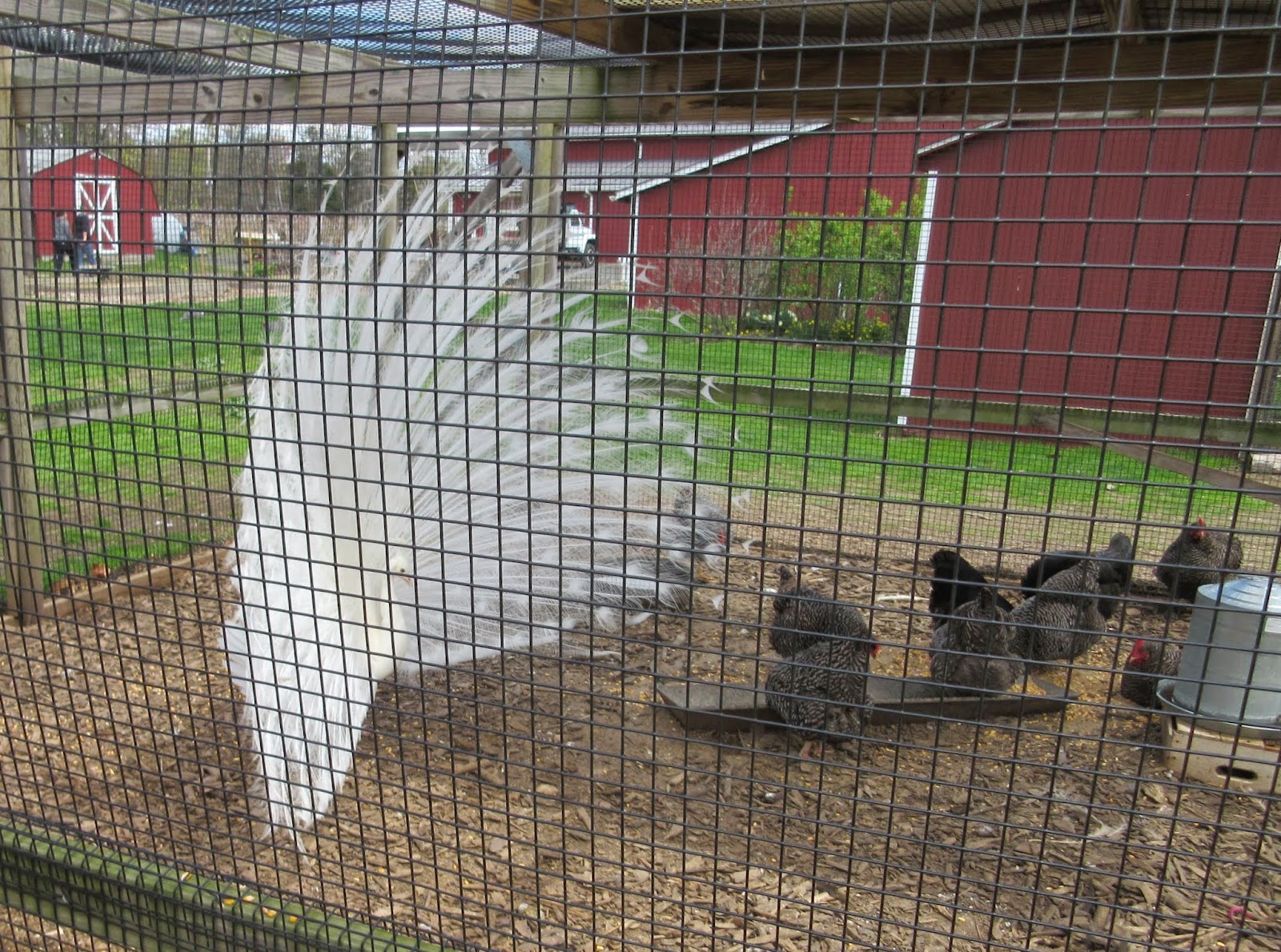 As I hurried to catch the start of a 40th anniversary tour of Terhune Orchards, surprised that I was actually on time, I passed a major showoff in the chicken coop. The white peacock was trying to impress the chickens, who were clearly more interested in the food.

As with the chickens, it's the food that's always impressed me about Terhune Orchards. No big show, just consistently great when it comes to taste and quality. No fancy facade, just keepin' it real. Cider, donuts, apples that just keep coming, and some 35 other crops to make the short drive out of town worthwhile. There's also the integration of business and community spirit, of which the chickens may not have paid much notice. 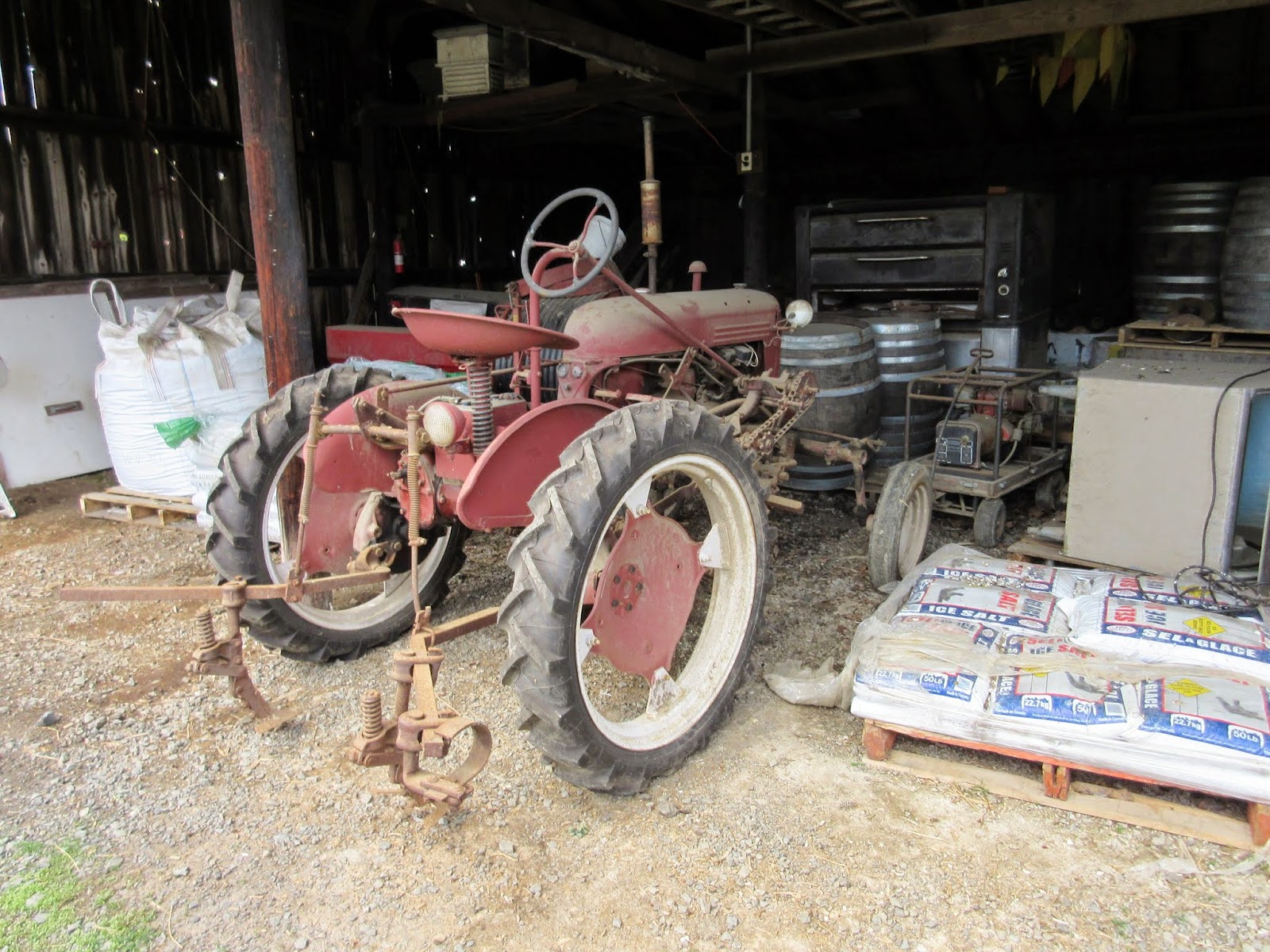 On this farm, utility is mixed with charm. History sits comfortably mingled with the modern in a multi-generational assemblage of "stuff".

Speaking of connections with the past, it turns out that the Terhunes, from whom the Mounts bought the farm 40 years ago, shared some common ancestors with Gary Mount, who had grown up on a farm in West Windsor next to Route 1. The Mounts learned of this only many years after the purchase. 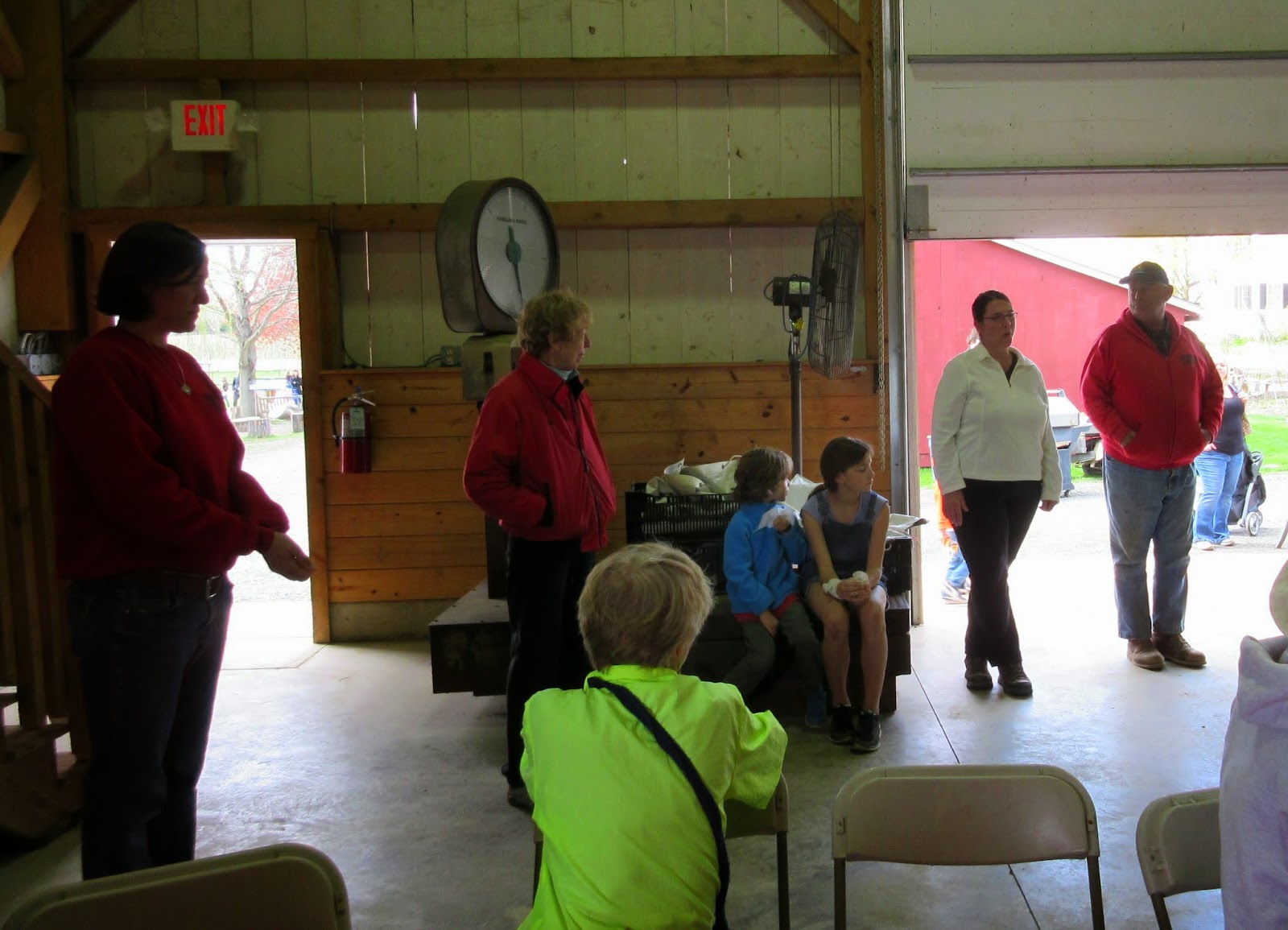 I made it to the big barn in time for introductory remarks by three generations of Mounts. Two daughters and their families have returned to continue the tradition. 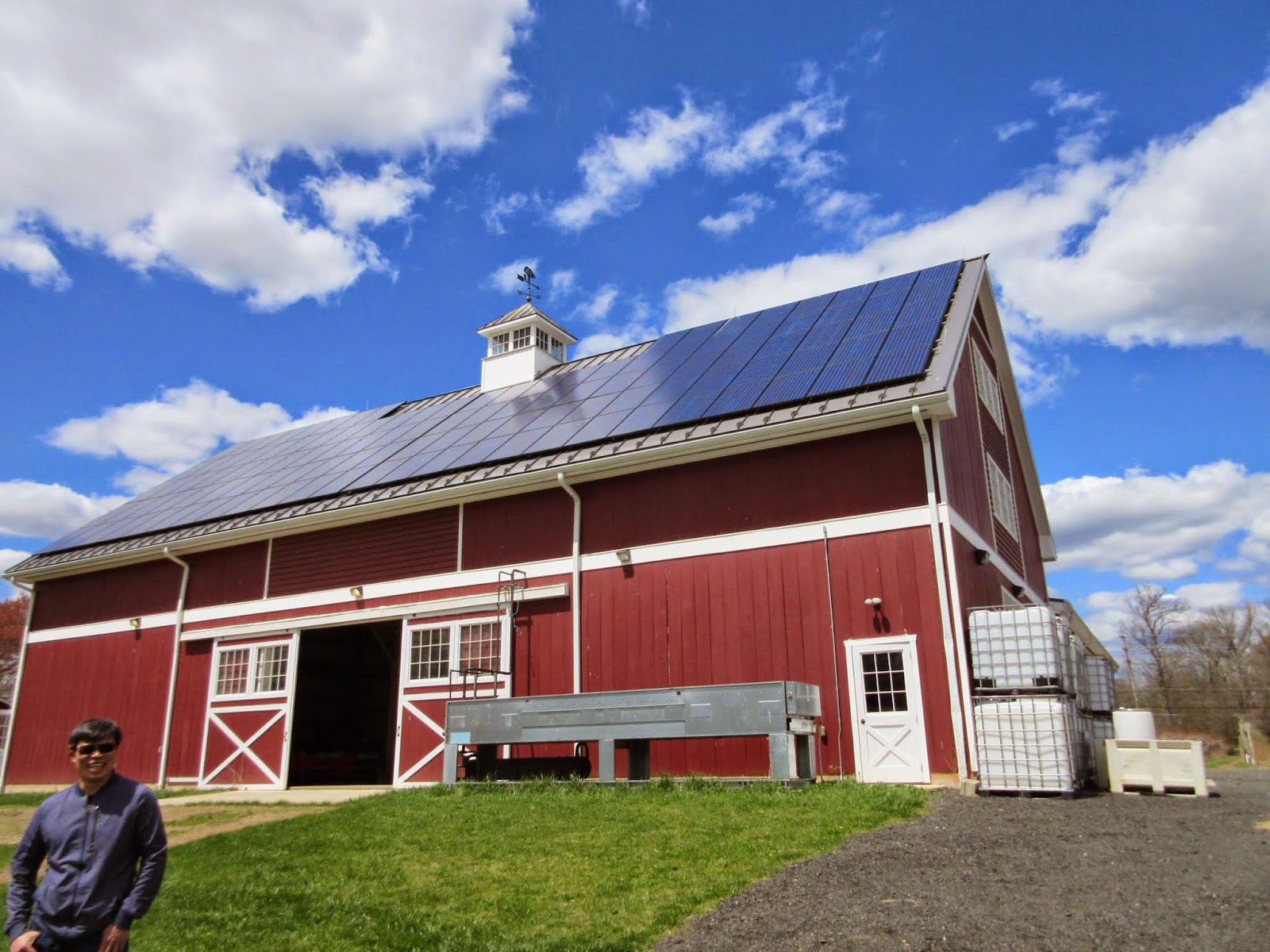 Solar panels on the big red barn, constructed by Amish woodworkers using the traditional oak pins instead of nails, supply 40% of the energy required to run the barn's climate control machinery. 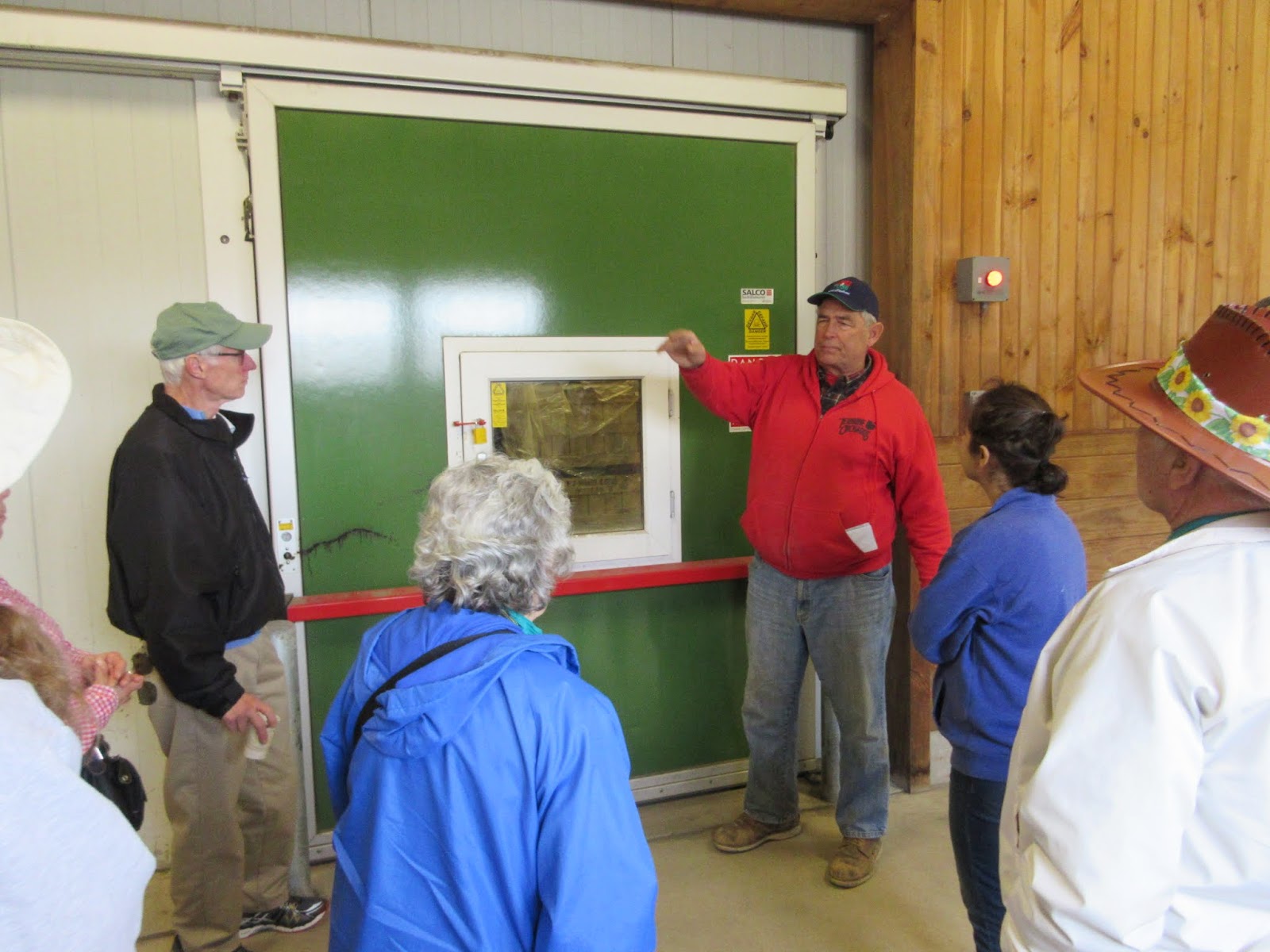 Apples are stored in two different chambers. One is kept cold and humid, and keeps the apples fresh for several months. The other is for longterm storage. There, behind lock and key, the process of ripening and decay is stymied by dropping the oxygen level from 20% down to 2%. The oxygen is pushed out by injecting additional nitrogen into the room. Each month in the winter and spring, the door is opened, oxygen is allowed in so that workers can breathe, and a month's worth of apples are moved to the other chamber. 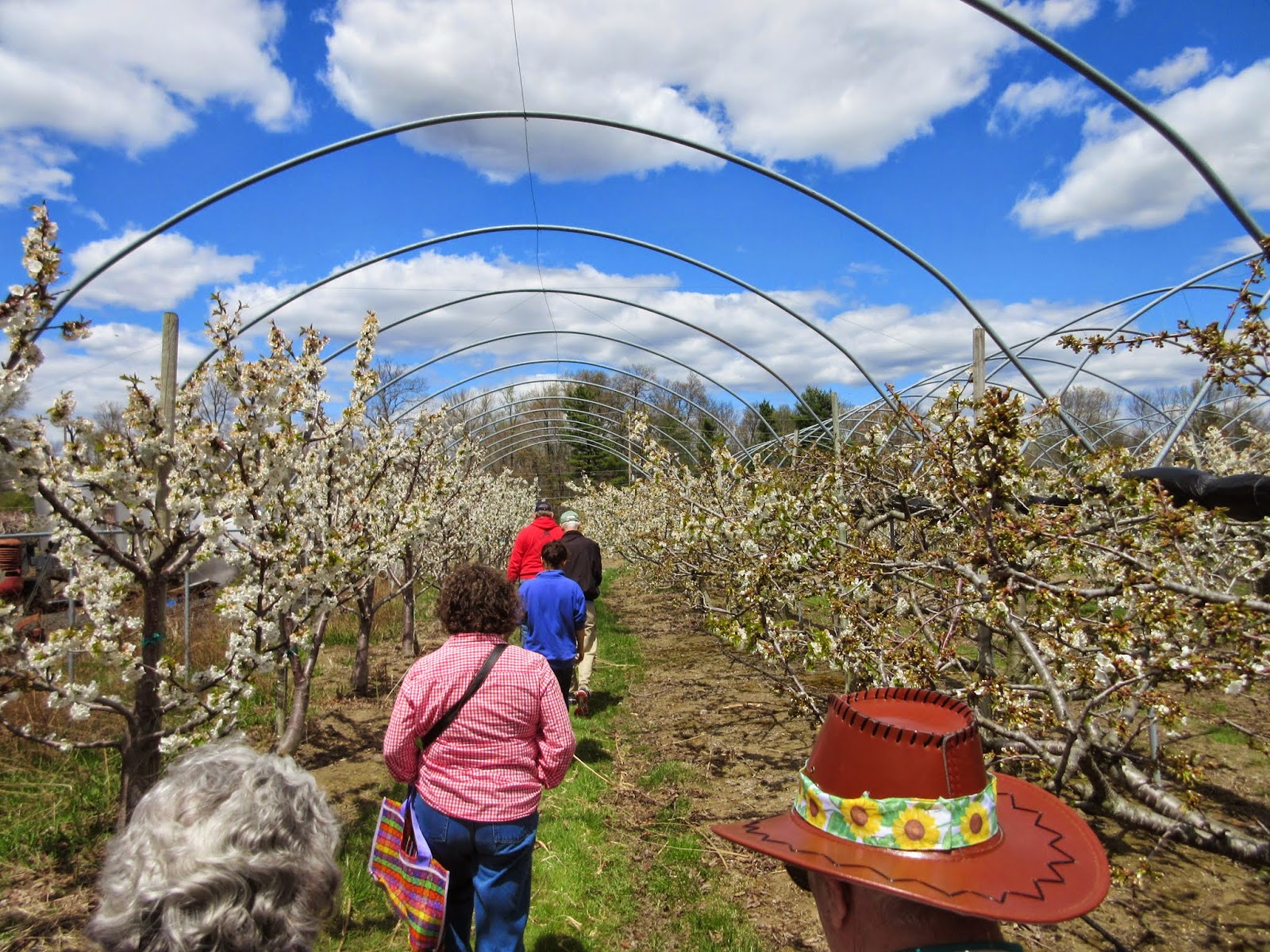 Outside, honey bees were pollinating the cherry blossoms. During the two weeks just before harvest, plastic is drawn over the hoops to protect the cherries from rain (and supposedly from the birds as well). Otherwise, the cherries will absorb the moisture and crack. 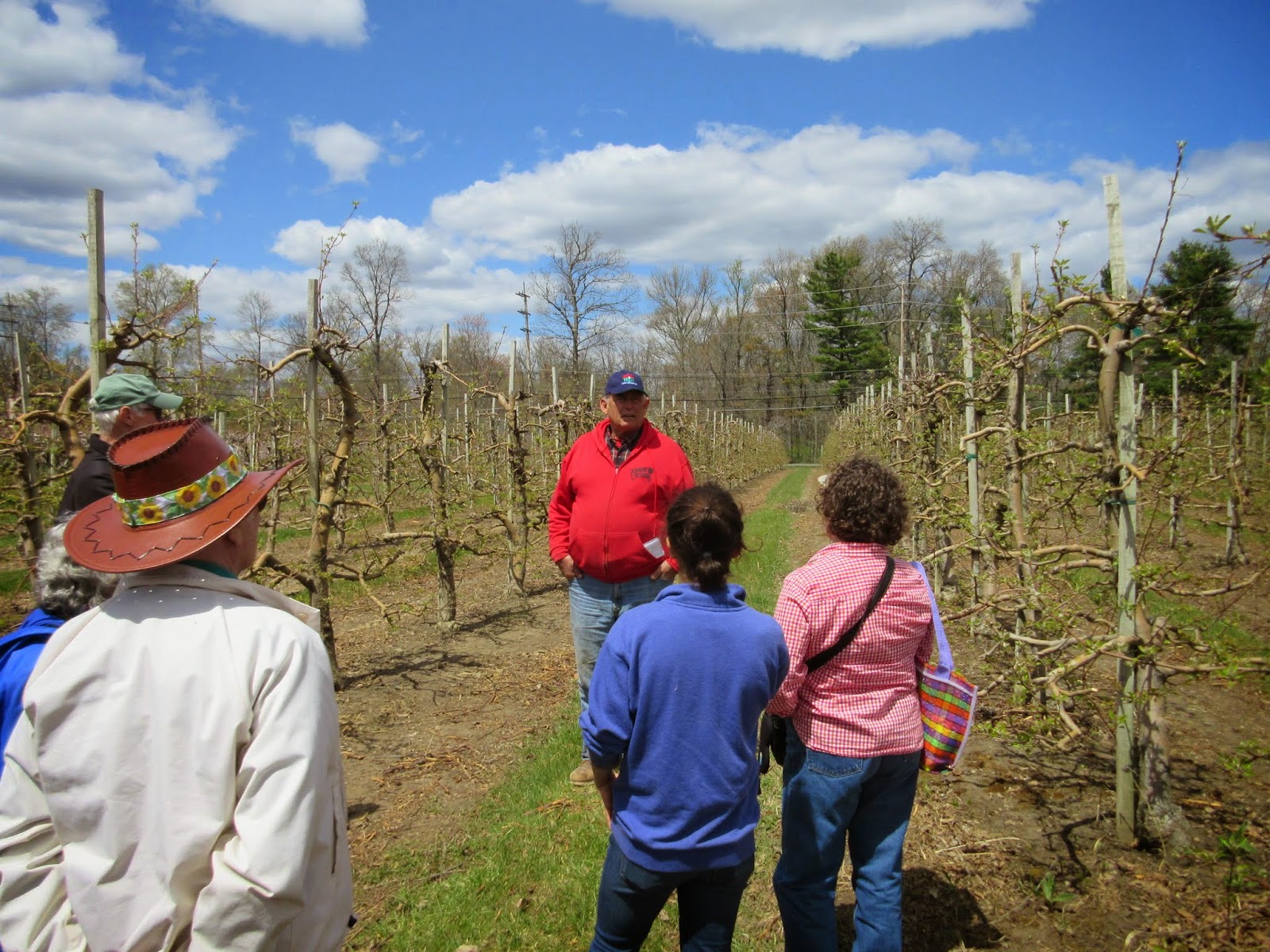 Apple trees are now planted much closer together than in the tradition configuration seen in the parking lot. Their trunks are so weak that they need to be staked, lest they fall over with a heavy load of apples, but the harvest is double what it used to be. 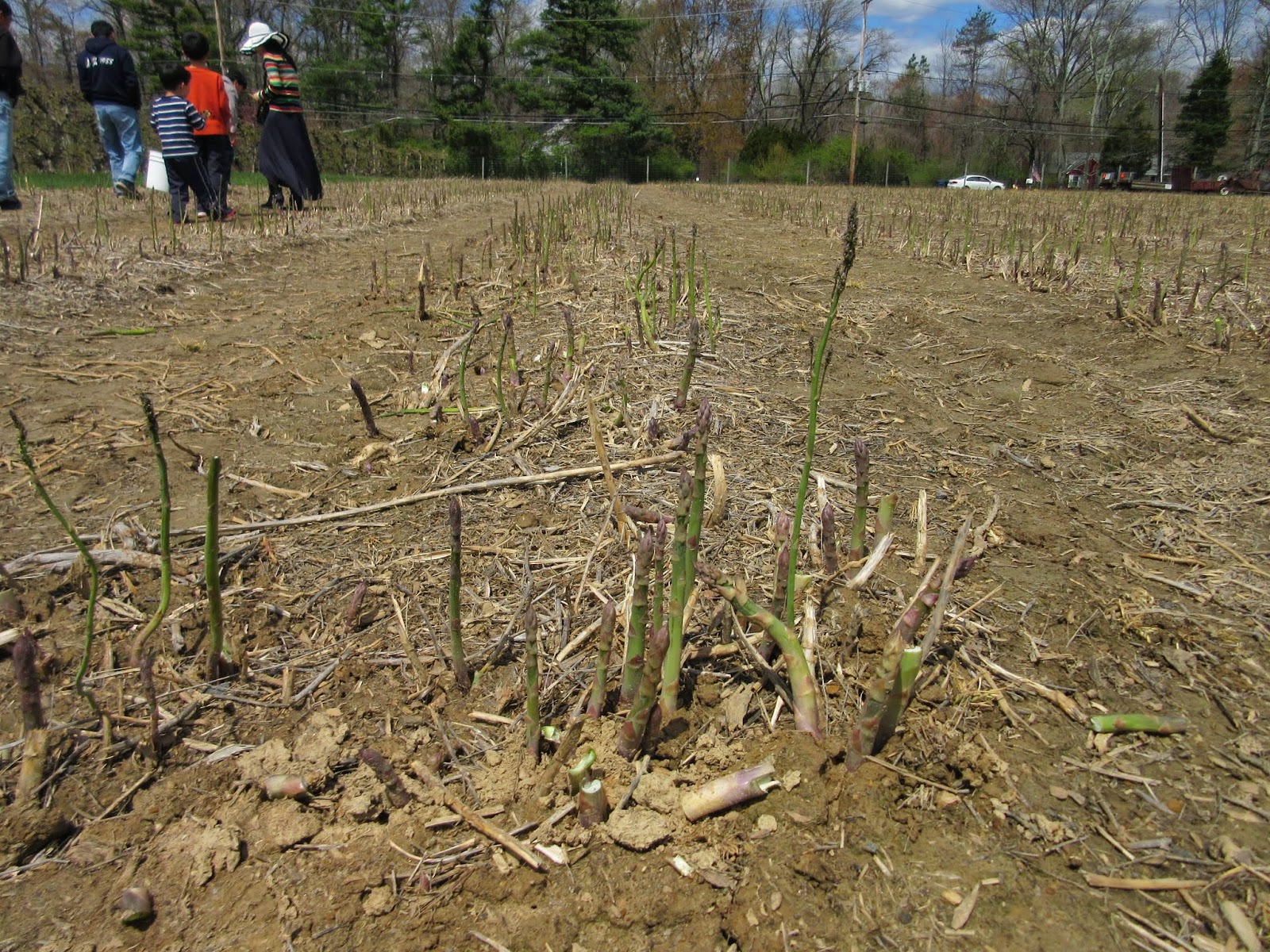 Pick your own asparagus. Ruth Stout, in her book from the 1940s called "How To Have a Green Thumb Without An Aching Back", described how gardeners used to dig a two foot deep trench to plant their asparagus in, then backfilled slowly as the asparagus grew. All that work, Stout contended, was unnecessary. Simply plant the asparagus at ground level. I didn't ask Gary Mount what his planting method is, but they make farming look so easy, I'm sure they don't seek out unnecessary work. 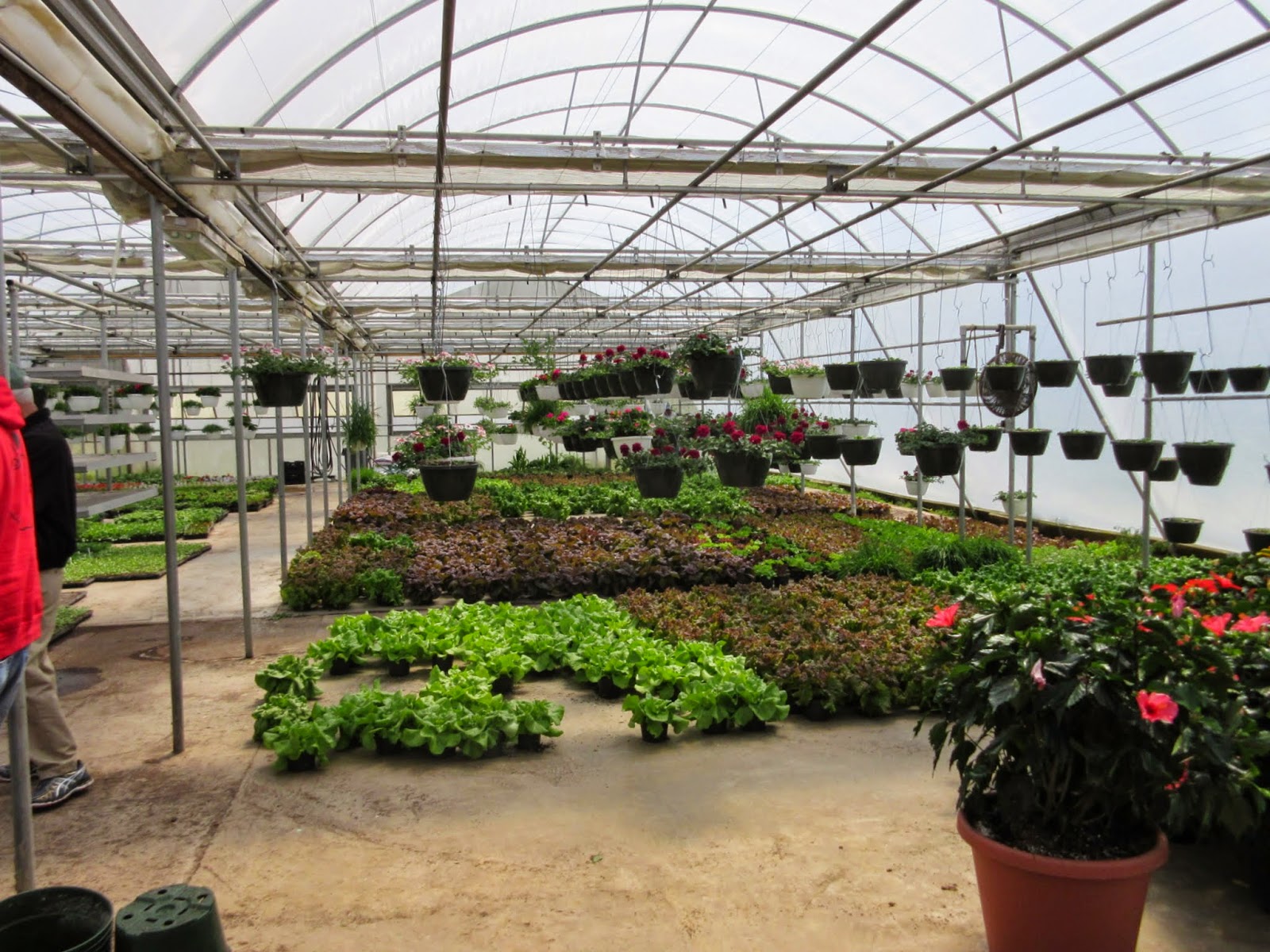 Some years back, one of their employees took an interest in greenhouse gardening, and the Mounts went with it. There are now three greenhouses, with one separated from the other tow, devoted to organic methods. Cloth is pulled over the space in winter, to provide at least a little insulation for this fuel-intensive space. 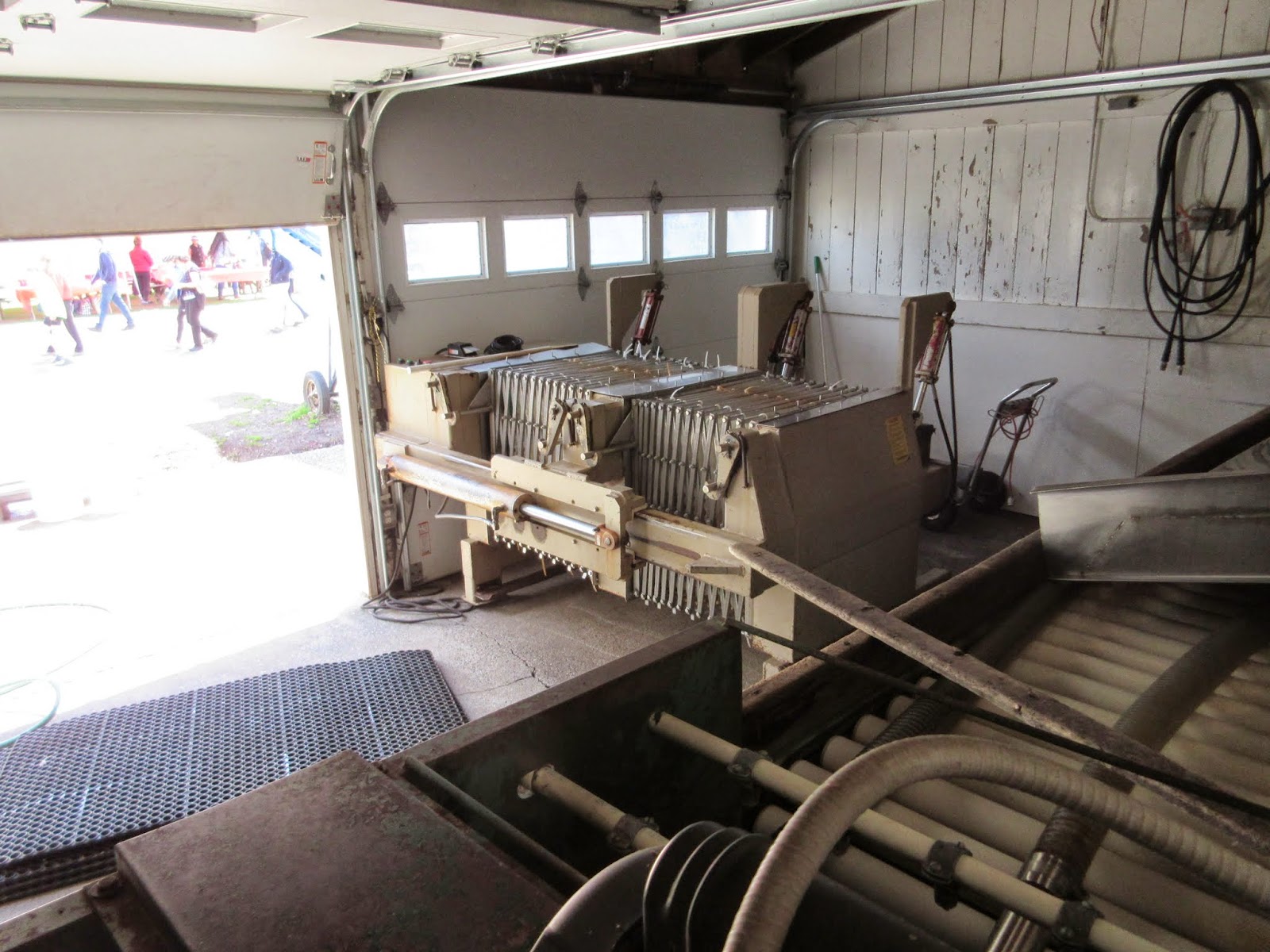 We got a tour of the bakery. It's surprisingly small, considering the output, not much larger than some expansive kitchens I've seen in private homes around town. The cider operation, too, is surprisingly compact. Apples that have slight blemishes or are too small for sale as apples are used to make cider. There's some thought put into blending different kinds. I asked why Terhune Orchard cider is so much richer in taste than other brands, and learned that most cider makers don't grow their own apples, but are supplied with small apples without much flavor. Stayman apples, not often used elsewhere, are also a particularly rich component of Terhune cider.

That accordion-like structure in the background, reminiscent of an Argentine bandoneon, is the cider press. I didn't ask whether the press plays tangoes while squeezing. The cider's then flash pasteurized, stored in big stainless steel containers designed for dairy operations, then jugged. The pulp is spread on fields using a manure spreader.

That was the tour. Gary headed out on a tractor to plant some corn. I headed back to town with donuts and asparagus, to catch some of Communiversity. Happy anniversary, Terhune Orchards! May there be 40 more.
Posted by Steve Hiltner at Tuesday, April 28, 2015