We recently received a spirited invitation in an email. Some new friends, Tom and Inge, were heading to New Jersey's pine barrens for an overnight canoe trip, and invited a bunch of us to go along. I was quick to say yes, but wondered what all the excitement was about, in canoeing down a river in the Pine Barrens an hour down the road from Princeton. How much "down" could there be in that flat, sandy expanse, and what sort of river is it, anyway, if it doesn't get much more than fifteen feet wide? How rich in pleasure could a barren be? Nothing but the enthusiasm of the invitation gave any evidence of the charm, challenge, and beauty that awaited.

Canoeing for me had always been the white water rivers of northern Wisconsin, where the rapids could swallow your boat and your gear if you made a wrong turn. Mostly we made brave family jaunts to the Flambeau River, the last journey being many years later, to let our father's ashes mingle with the bronze, tannin-rich waters, like grey flakes of sand catching flashes of sunlight as the current carried them away. That's how much love we had wrapped up in those rivers. 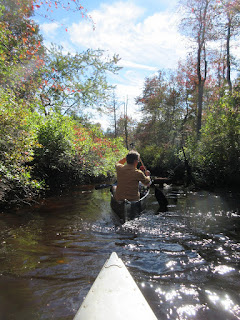 Rapids or not, current or not much, we were now headed on an overnight canoe trip down a river I chose to call the "mighty Mullica", no matter how mighty it might turn out to be. Their generous offer had turned the tide enough to lure my urbaphilic family out of its routines, to venture beyond the limits of creature comforts and into the New Jersey hinterlands.

The Mullica, draining the largest watershed in the pine barrens, was as advertised--narrow, slow-flowing--and yet its tight-cornered meanderings presented a surprising challenge even for a seasoned canoeist. Put your paddle down long enough to take a photo and the current might carry you gently but surely into a tangle of shrubbery. 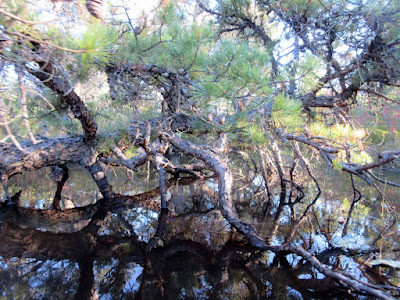 I had to draw on muscle memory to bring back the variety of paddle strokes needed to maneuver past lovely obstructions like this pine tree fallen across the water. There always seemed to be just enough room to slip by.

The narrow channel offered a more intimate encounter with the surroundings than a big river, akin to a magical boardwalk that carried us along through an unspoiled landscape. 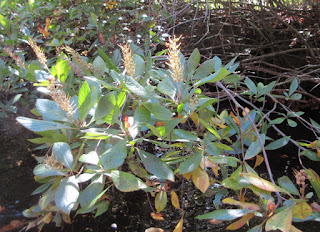 Being the designated botanist for the journey, in the great tradition of early European explorations of America, albeit on a somewhat tamer scale, I immediately started grooving on the foliage. Hey. Sweet pepperbush, everybody! Also called summersweet because of its fragrance, which must really be sweet when canoeing this river earlier in the season, because it lines the banks for miles. Alas, no one was listening. The kids on the trip--enough to make a ten kid pyramid later in the trip--had all raced ahead in their sporty kayaks. 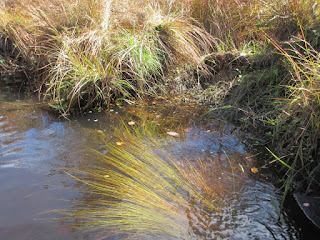 We canoeists, laden with camping gear, held down the rear, allowing time to admire the beauty of the current's play on some sort of underwater grass. The grasslike clumps on the banks are actually tussock sedges, which year by year build their own individual pedestals to levitate above the muck. 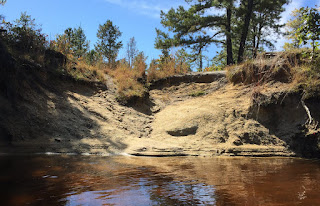 Every now and then, a patch of higher ground rising out of the marshy expanse would show off the underlying sand. 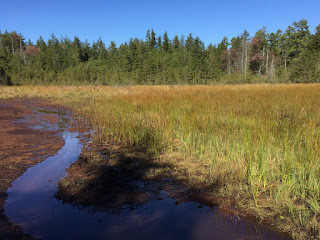 Elsewhere, the vistas opened up with broad wet meadows, each having its own special mix of sedges and rushes. 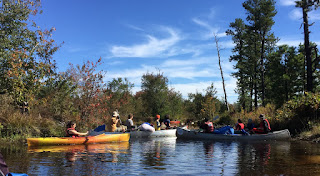 There were occasional backups where fallen trees or beaver dams stymied our multi-generational flotilla. 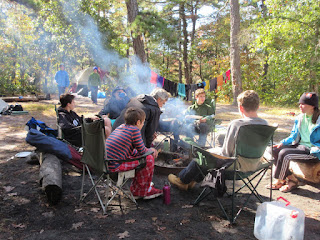 Later on, round the campfire, the younger generation charmed us with spirited renditions of Michael Row the Boat Ashore, Goodnight Irene, Cumbaya and--just kidding! Somehow those tunes have not transferred to the next generation, which instead launched into a brainy, animated discussion that pivoted rapidly, in internet surfing fashion, from relativity to their favorite sci-fi flicks, to playing a game that required everyone to shut their eyes--a smart game to play when wet firewood is generating a lot of smoke. We could at least thank the rains the week before for making the mighty Mullica more mighty. 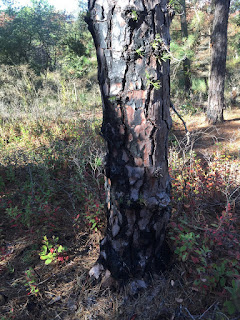 If I had given a post-dinner lecture on the botanical world that surrounded us, I would have begun with a big tip of the hat to forest fire, which we reflexively think of as destructive, but not so. The charred bark on this shortleaf pine offers evidence of periodic "cool" fires that sweep through the forest, cleaning the ground of accumulated pine needles and fallen limbs and creating a beautiful, park-like landscape that welcomes light and exploration. Without periodic fire, the pine forest would become choked by debris. Seeds couldn't sprout through the thick mulch of pine needles. The trees and other plants are in fact cleverly adapted for fire. The pines and oaks grow thick, fire-resistant bark. The pine needles and thick, waxy oak leaves resist decay, and so continue to accumulate year after year until there's enough fuel to carry a fire through the forest. Pitch pines produce serotinous cones that only open after being heated by a fire, fortuitously spilling their seeds onto the bare mineral soil and nutrient-rich ash left behind. 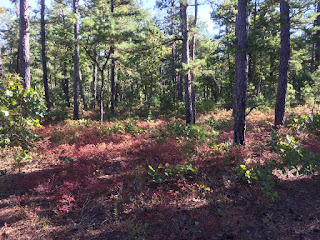 Fire's varied intensity kills some trees but not others, leaving an open canopy that allows enough light through for blueberries to flourish. Though the bushes get burned, they quickly resprout, to produce crops for a few years until the next fire comes along. Because fire is so important to this landscape, many are "prescribed"--intentionally lit by crews under optimal conditions of wind, fuel loads and humidity.

That so few people know about fire's important ecological role speaks to how poorly we are served by the news media's reflexive portrayal of forest fire as a story about victims and perpetrators, a battle against nature. Those mis-portrayals lead to policies that suppress beneficial fires, thereby insuring that fuels in the forest will build up until the next fire will burn too hot, killing the trees and sterilizing the soil. Fortunately, the pine barrens is one place where enlightened management persists. 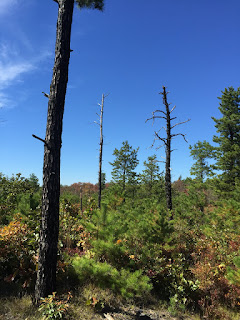 After growing accustomed to the urban landscape, where anything dead must be swept away as quickly as possible, it's a relief both spiritually and aesthetically to enter a land where trees can have a long life after death, standing against the sky like sculptures in nature's garden, to weather slowly in the sun and rain.

For a botanist, the word "barren" is associated with richness. Poor soil can actually foster high diversity, perhaps because the lack of nutrients reduces the aggressiveness of plants. Rich soil can empower one species to grow too vigorously over all the others. 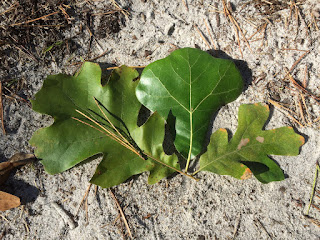 My campfire chat about the trees whose wood we burned might have included some tree identification. The pitch pines and shortleaf pines have needles grouped in threes. In contrast, the white pines planted around Princeton have groups of five, like the letters in "white". The post oak leaf on the right has a characteristic cross shape with rounded lobes. The blackjack oak leaf in the middle has a broad, rounded look, much bigger at one end, like a bison. The black oak on the left has small points at the tips of its lobes. 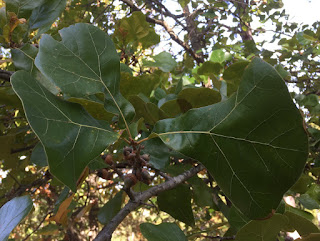 Blackjack oaks don't grow much more than twenty feet tall in the poor soil, and when laden with acorns have the look of a fig tree. 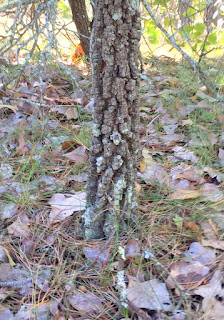 You can see how thick their bark is, even when young, the better to resist the flames that are sure to come. 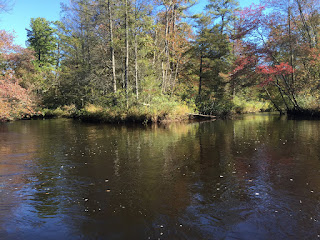 I might have talked about why the river was so zig-zaggy, how the forces of erosion work on the outside bank, causing the curves to become more and more pronounced. This photo is from the outside edge of one of those bends, which has become so sharp that one can catch both upstream and downstream in the same photo. 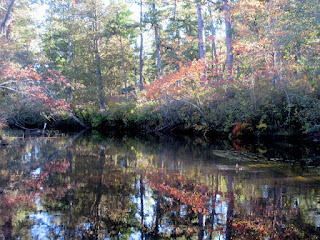 I might have talked about the red maples, bright with fall color, that line both this river and Princeton's streets. They are adapted not so much to wetness but instead to the low oxygen conditions of soggy soils where water has displaced most of the air pockets. That adaptation works well for dry urban soils, where compaction also leaves little room for air. 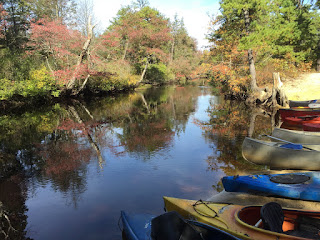 Overnight, we were treated to a coyote chorus, which started out sounding like a solitary owl, then quickened into a collective call. One of the Pinelands Adventures employees told me the coyotes are a coyote/grey wolf mix, with the grey wolf element having somehow made the journey from Michigan.

One level of added pleasure on this trip was the silence, broken only periodically by a distant airplane. The background noise of the urban world is like static on a radio. What a relief to shed that clatter and enter a high-fidelity world where sounds are crisp and clear. Though the western horizon glowed with the light from Philadelphia and Camden, the night sky, too, was less cluttered with the urban static of light pollution. Stars were bright enough to give a hint of the Milky Way.

Even the less than comfortable night spent on hard ground--mental note: bring better padding for underneath the sleeping bag next time, or try one of those hammock tents we saw at the next campsite over--led to an early morning walk to loosen up the back, and the chance to witness one of the most beautiful sights of all, the thick clouds of mist rising from the river as chill coaxed vapors skyward from the warm waters. 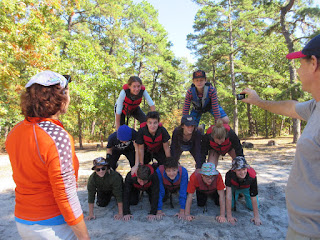 Our campground stay concluded with a traditional pyramid photo session, with the pyramid orchestrated by Zoe Brooks, of Trenton Circus Squad fame. 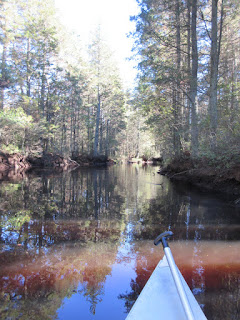 The Mullica was mightier the second day, with faster current and broader channel bordered by groves of Atlantic white cedar, whose tall, straight growth contrasted with the gnarled look of the pines and oaks at the campsite.

Along more open stretches, switch grass lined the banks--switch grass being one of the grasses of the tall grass prairies where buffalo roamed. It surprised us all years back when it made a cameo appearance in a State of the Union address in George W. Bush's vision for a biogas future. 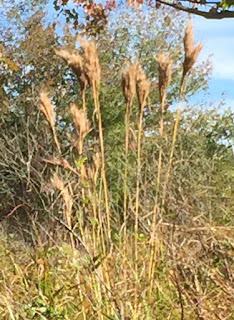 The botanist went back to botanizing, finding old, improbable friends from his North Carolina days, like bushy bluestem, 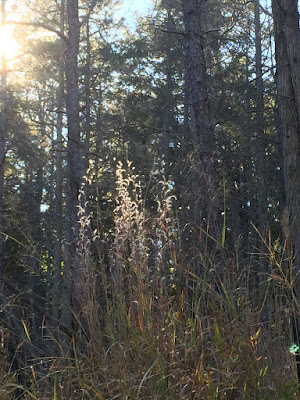 and split-beard bluestem, a beautiful grass that looks like cotton when backlit. 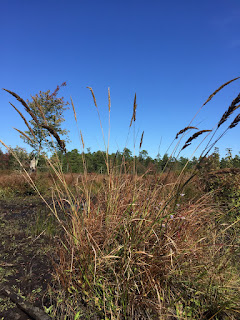 He collected specimens of this mystery grass to take back to the King of Princeton, as evidence of the richness and promise of these newly explored lands to the south. 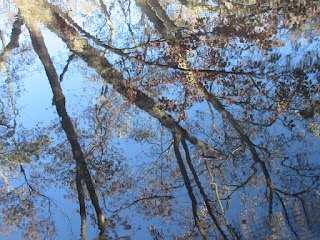 But mostly, he and everyone else brought back memories, of young voices around a campfire, the green of craggy pines against a deep blue sky, the crispness of sounds against a backdrop of silence, the relaxed flow of water, and a reflection or two.