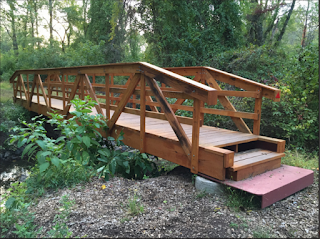 After many years of planning and design, two new footbridges have been completed at Mountain Lakes Preserve. A ribbon cutting is scheduled for 1:30 this Sunday, October 18th, followed by a reception at Mountain Lakes House, hosted by the Friends of Princeton Open Space.

The project dates back to when I was working for FOPOS, and if memory serves, I helped direct a funder to the board, which then chose the bridge project. Thus began a long process of seeking the necessary permits to build in a floodplain. Before the bridges could span a stream, they had to negotiate myriad natural and regulatory hurdles. For my part, I remember cautioning the planners not to locate the bridge where two hazelnut bushes grow, since there are so few examples of that species in Princeton. Town engineers put a great deal of effort into designing the bridges to minimize the risk posed by shifting streambanks and powerful floods.

The bridges will not only open up a corner of the preserve previously hard to access, but should serve as nice spots to pause and look down into the water.

The dedication of the bridges, with a reception at a house whose preservation has greatly benefitted open space, is a clear demonstration of how buildings and other infrastructure, historic or not, can complement the open space that surrounds them. In addition to providing office space for several nonprofits, Mountain Lakes House hosts weddings and other events, income from which is then used for acquisition and management of open space in Princeton.

Despite this excellent example, property being considered for open space preservation is still considered tainted if it has a house or other built structure on it--a contradiction to ponder while standing on a new bridge, peering down at the mysteries of Mountain Brook.

Those planning to attend are encouraged to rsvp at info@fopos.org.