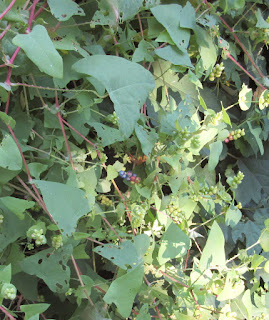 The second sighting of Mile-a-Minute, a.k.a. Persicaria perfoliata--Princeton's new invasive species with triangular leaves, sharp spines, and speedy growth--came two weeks ago during a tour for a visiting friend of my various habitat restoration projects around town. 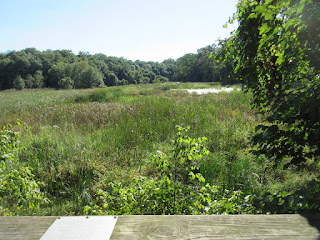 First stop was Rogers Refuge, to see Princeton's improbable marsh, nestled between the Institute Woods and the Stony Brook, where birds and birders congregate, 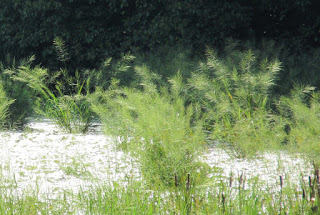 and wild rice thrives. Runoff and seepage from the slopes of Institute Woods are augmented by water pumped from the Stony Brook to keep the marsh wet through summer droughts. For anyone seeking auspicious partnerships between people and nature, between private, public and nonprofit, will find it here. The land is owned by the American Water Company, which pays for the electricity to run the pump, which in turn is maintained by the municipality. The Friends of Rogers Refuge, not quite a nonprofit but an official volunteer organization nonetheless, is the entity that cares most deeply about the marsh and the birds it provides habitat for, and so pays the attention necessary to make sure the pump and everything else is running smoothly.

But I was talking not about functioning habitats and symbiotic institutional relationships, but about the new invasive threat on the block, which we encountered on the drive back out of the refuge. 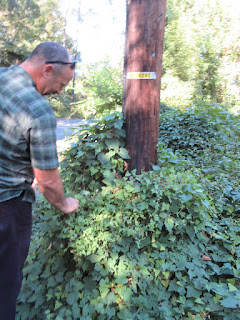 There, climbing up a big blob of porcelainberry surrounding a telephone pole, was the Mile-a-Minute. It was a smaller patch than I had found at the Princeton Battlefield several weeks prior, but that two patches have now been found suggests that this invasive has gotten a foothold somewhere in the Princeton area, and birds are spreading the seeds across town.

This patch, too, found its way into a plastic bag that was sealed and will be put out for trash collection, lest its seeds spread. 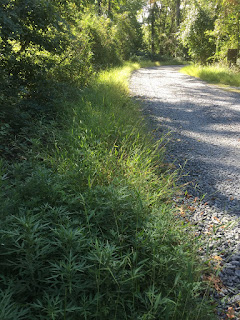 The gravel driveway into Rogers Refuge, by the way, is exhibit A of how invasives can take over a landscape and render it inedible to wildlife. The original alteration of hydrology to build the road discouraged natives and made perfect habitat for invasive species. Japanese stiltgrass lines the edges. 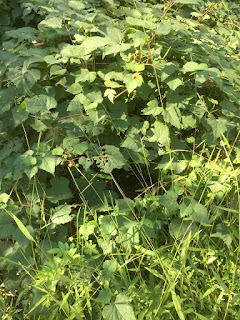 Here, the "grass on stilts" reaches up towards another invasive that's much better at climbing, porcelainberry. 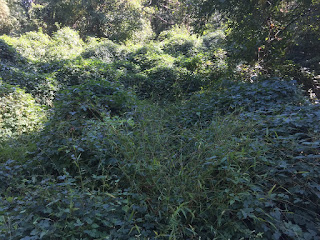 That moundy appearance is porcelainberry vine growing over everything. As stiltgrass coats the ground of our forests and displaces the turfgrass in our lawns, porcelainberry expands its elevated, kudzu-like dominance across Princeton. 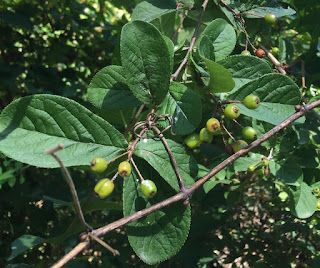 Asian photinia, note the unusually obovate leaves (wider towards the tip) whose capacity to take over the forest understory was first demonstrated at Mountain Lakes preserve, is also having a good year. 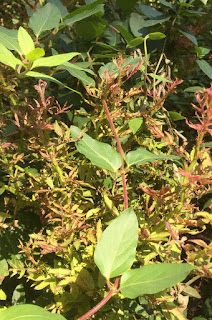 Even if this invasive multiflora rose is succumbing to rose rosette disease, another invasive, Japanese honeysuckle, comes along to climb over it. 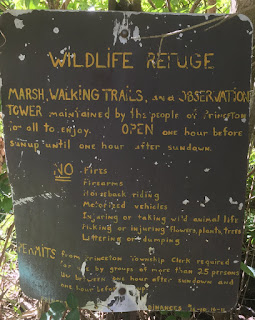 This sign, from back in the '70s when invasives must have seemed a minor annoyance, says not to take or injure any plants. 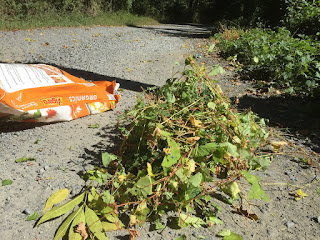 But some of those rules that seemed to make sense in the 1970s make no sense now. I made sure to return to take one plant, that prickly Mile-a-Minute.

You, too, can be a plant keeper. Keep an eye out for Mile-a-Minute, and contact me if you see it.