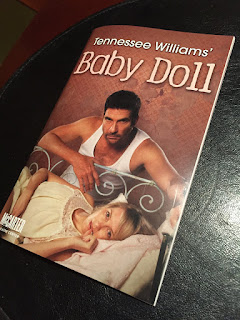 Nature makes its way into Emily Mann's adaptation and direction of Tennessee Williams' Baby Doll at McCarter Theater (the synopsis, here, comes with a spoiler alert). There are the two cameos of a live chicken wandering into the kitchen of the dilapidated southern manor that serves as metaphoric backdrop for this drama. There's the seedhead of a dandelion that Silva picks up and blows, in an early expression of his poetic side, its seeds scattering like all the people who come and go in the world. The endearing, somewhat batty housekeeper calls roses "poems of nature" as she cuts one and clutches it as if trying to hold onto a life that is slipping away. And there's the refreshing well water that only Silva, a brown-skinned Sicilian Catholic looked down upon by a decadent white protestant society, can summon from the cool depths of earth, a salve for the oppressive Mississippi heat.

Inner and outer nature correspond in the two male characters. Silva's power comes as much from his inner nature as his physical stature, not from a rigged system of social status that props up the likes of Archie Lee--as rotting and haunted a hulk as the house he bought for cheap. Only in the character of Baby Doll are inner and outer natures at odds, a physically mature woman emotionally starved and stunted by circumstance.

The most riveting tension is between two aspects of Silva's personality, which travels from volcanic anger to poignant affection. He merges menace and charm, his anger mixing and dissolving into a gentle caress. He carries a whip, or more accurately a crop, which is a short whip to be used while riding a horse. There's a soft leather tip that allows the rider to influence the horse without leaving a mark. It makes an effective prop that serves not as a weapon but like a baton to channel the orchestration of his anger and influence upon the other characters.

Not far beyond the stage, the cotton crops are stripping the soil of its original fertility, while Archie Lee seeks to strip the female characters of their last shreds of self respect. Cotton drifts invisibly across the stage as dust from the mill, irritating Baby Doll's sinuses. Exploitation of nature mixes with the oppression and infantilization of women, but the play offers hints of a better world where a woman's nature finds appreciation and respect.

As a botanist who magically got a last minute seat in the front row, I can say that though the plumes of Maiden Grass (Miscanthus sinensis) look great in one corner of the stage set, the bluestem grasses mixed in are a lot more authentic. May I recommend Andropogon glomeratus as a visually similar native substitute for the Japanese Miscanthus for the next production? This is the sort of in-depth botanical theater analysis you can't find anywhere else.

I was encouraged, through my involvement with the McCarter Onstage community theater group, to audition for the part of the Sheriff, who is non-union and has a few lines near the end. The audition involved preparing a one minute monologue. What I came up with, delivered in my best and only southern accent, was a testimonial about the reading of the play I had seen the year before, in words that though genuine could have been construed as totally fawning:

"I haven’t read too many plays in my time, but I could read every play ever written and never find a better ending than you got here in Baby Doll," (in which the characters remaining on the stage--don't want to give it away) "speak not only for themselves, and maybe for the play as well, but also for every writer, every actor, every human being who’s ever lived."

That would be some sheriff, to talk like that. I didn't get the part, but at least said my piece.

Continues through October 11, followed by the hugely funny "A Comedy of Tenors".
Posted by Steve Hiltner at Wednesday, October 07, 2015