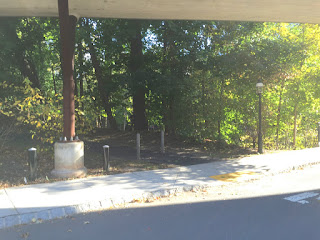 Make yourself like rainwater, follow Princeton University's slopes down to the graceful Streicker Bridge that straddles Washington Road, and there you will find a trail through what I call the Hidden Valley. The trail begins under the bridge, branching off from a paved bikepath that goes around the back of the Chemistry Building. 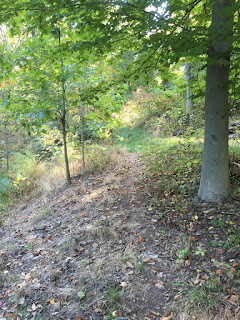 The valley's steep slopes and canopy of 200 year old trees give a sense of seclusion, despite being a stone's throw from Washington Road.  Okay, "stone's throw" is an old expression, and probably should come with a cautionary warning in this safety-conscious era. By accidentally using it, I didn't mean to encourage or condone the actual throwing of stones, particularly with the off chance of hitting two birds, or a car driving by. 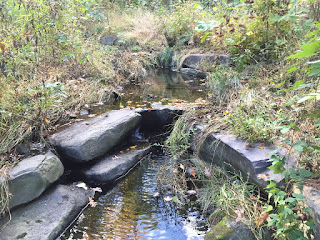 It's a very stony valley, though, and when I was a boy, the impulse would definitely have been to toss a stone at the water in the stream, to get that satisfying kerplunk. The stream was restored to kerplunkable condition by the university. Bulldozers and backhoes lumbered up into the woods to carefully place boulders in the shape of "cross veins" which manipulate the scouring effect of the water to form a series of pools and riffles, which in turn make good aquatic habitat. 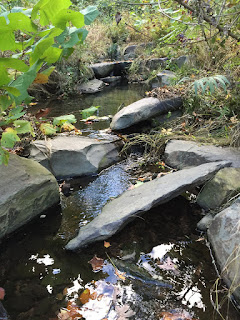 There's evidence that nature's been throwing stones--big ones. The same powerful stormwater runoff from the campus that had degraded the original stream has also pushed some of the carefully placed rocks out of position. That got my land manager's mind going, which is to say I started noticing all the little interventions that could make a big difference for this small gem of open space. Call it a passion for maintenance, which either turns this post into a timely call for action (university grounds supervisor, please read!) or makes me something of a rude guest in this Hidden Valley, pointing out the flaws.

A workday with some university students could get those stones back into place before surging stormwater pushes even more out of position. 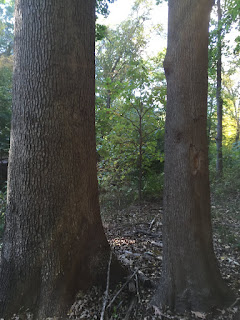 And the white oak on the left, 200 years old if it's like others in the valley whose rings have been counted, is having to compete with a smaller but quickly growing Norway maple that has invaded the valley. 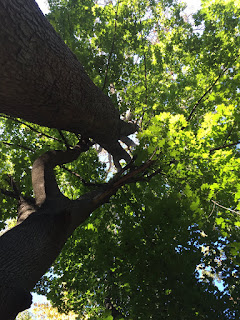 Norway maples are notorious for their aggressive root systems and a capacity to grow up in the shade, eventually outcompeting and displacing the native trees above them. The same slow drama is happening along the fencelines of people's backyards. Looking up, one sees the dense green leaves of Norway maple, not the oak's. 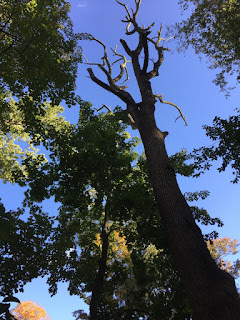 Here, one of the old giants has succumbed, perhaps from the trauma of Hurricane Sandy, or the soil trauma of the stream restoration project, or from the root competition of Norway maples. Maybe all three. It would be relatively easy to cut down all the invasive maples, which otherwise will expand their impact on native shrubs and old growth trees. If we're going to be active, we might as well be pro-active. 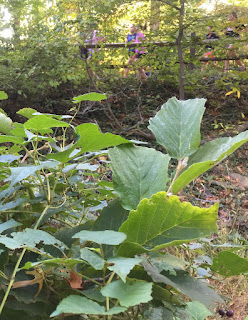 And porcelain berry, "kudzu of the north", has gotten a hold, here seen climbing over one of the witchhazels the university planted as part of the restoration. 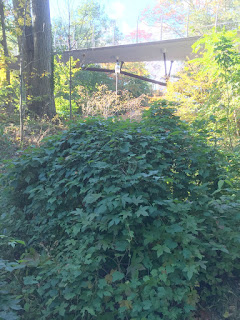 The extensive replantings of forbs, shrubs and trees, by the way, was very successful, despite the tough work of planting into shale, and it would be a shame if it all gets overrun by invasive vine. I'm sure the university tries to instill the values of early intervention and followup in its students. No better place to get a hands-on experience with that than in this Hidden Valley. Muscles remember far better than the mind does. 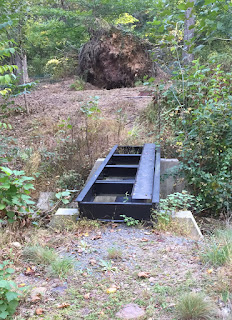 This little foot bridge over the stream has an unfinished quality to it, unless it's designed to help athletes hone their sense of balance while walking between sports fields and boathouse to the west and the Jadwin Gym complex to the east. 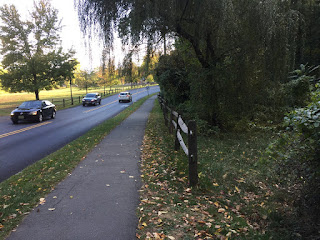 The main trail ends at Faculty Road, with the big field and Carnegie Lake just to the left in the photo. It's a fine little trail, sustained mostly by hikers and deer, with a mowed branch that heads over to Jadwin Gym, and another across the unfinished mini-bridge to Washington Road. The university's intention, according to those who designed the stream restoration, was to make this little valley welcoming to students and the general public. With its towering old trees, lovely stream and sense of seclusion amidst the university's bustle, the valley is rewarding to visit now, and could be even more so with some periodic informed intervention.
Posted by Steve Hiltner at Saturday, October 24, 2015