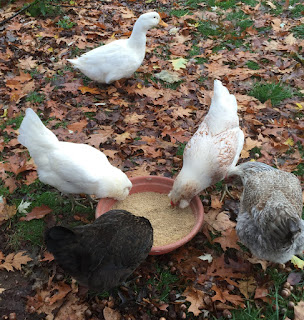 We've been without egg production in our backyard for awhile. Daisy the duck, who had laid one egg daily like clockwork for several years, suddenly stopped some months ago. And Buffy, the white Aracana on the left, also decided her egg laying days were done. The three new Aracanas, bought as chicks from Rosedale Mills in the spring, were keeping us in suspense as to whether they'd start laying before winter comes. For the first time in years, I found myself in the grocery store facing shelves stacked high with eggs, trying to make sense of all the cagefree, natural, hormone-free, organic, brown or white, plastic or paper possibilities. 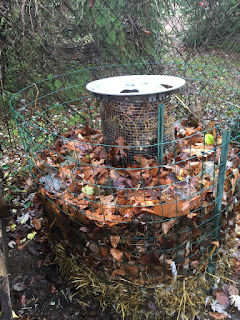 But over the weekend I did a full cleaning and rearrangement of their coop, and changed up the yard a bit, installing my own design of a leaf-corral/food-scrap-composter in a few spots. (More on these nifty devices in a future post.) 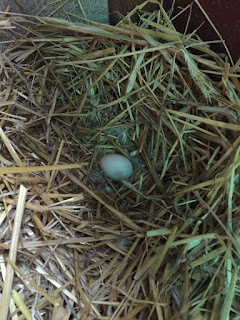 Maybe one of the birds took the changes as a cue. Or maybe there's some magic in the date, 11/11--that being the number I see on digital clocks far more often than chance would suggest likely--because the first egg in months appeared in a back corner of the coop this morning. 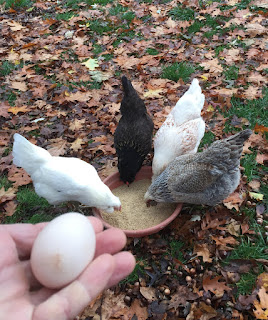 Now the question is which chicken laid the egg, and will the other two follow suit, ushering in a new era of fresh eggs from the backyard.
Posted by Steve Hiltner at Wednesday, November 11, 2015