A "Wishing (the Earth) Well"

One approach to backyard composting is a modified version of a leaf corral that I've been demonstrating in our front yard on busy Harrison Street. The full meaning of the sign in the photo may be lost to some passersby, who may see only "wishing well" out of the corner of their eye. A leaf corral is a way of wishing the earth well. Add a leaf, and make a wish. 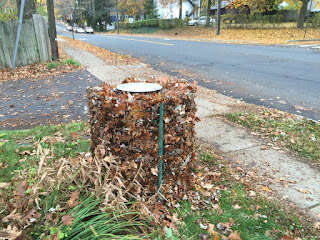 Though it has a well's characteristic shape, it works in the opposite direction. Rather than being an ongoing source of cool fresh water from the giving earth,  the Wishing (the Earth) Well channels nutrients back into the soil from which they came.

This is a dream come true, not only for urban soils and the nearby trees, but also for the homeowner who needs an ongoing place to put leaves and yard clippings, because the leaf corral is a bottomless container. The leaves quickly settle, decompose, and disappear back into the ground, steadily making room for more. Settling makes more room within a week; decomposing happens over the course of one summer. We might even call it "Bottom's Dream", after Nick Bottom in Midsummer Night's Dream, because it is a dream that "hath no Bottom". 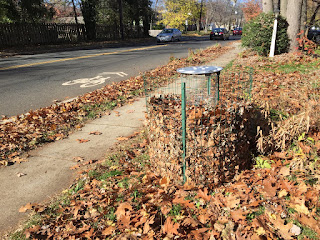 The first Wishing the Earth Well went next to the sidewalk, because otherwise the only visible leaf management behavior people see in town is the piling of leaves in the street, where they become a nuisance. A friend pointed to all the leaves on the lawn around it, and wasn't very convinced it could hold them all. Good point, so I integrated another corral, 6 feet across rather than 3, into the landscaping elsewhere in the front yard, 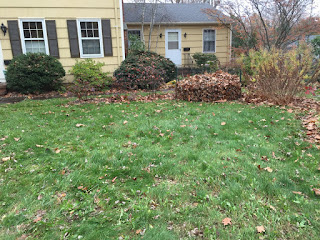 and that provided more than enough capacity for all the leaves our two big oaks, elm and silver maple generated this year. Installing it even served as a prompt to finally get some flower bulbs into the ground, which otherwise might have sat on the back porch all winter, unplanted. 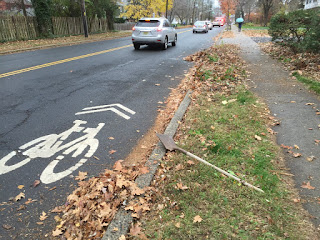 With capacity to spare, I ended up adding the leaves that had fallen along the curb. Having a leaf corral as a clear destination for leaves serves as added motivation to clean them up from the yard. 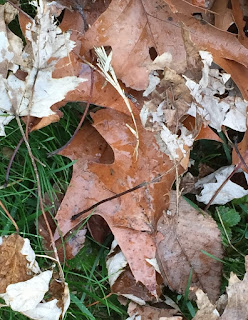 Here you can see how differently the various kinds of leaves behave. The whitish leaves from the silver maple, and an elm leaf in the lower right corner of the photo, begin decomposing before they're even raked up. If those quick-decomposing leaves are put in the street and not picked up for a week or two, they'll start start rotting, releasing nutrients that then get swept down stormdrains in the next rain, polluting waterways. The oak leaves are more resistant to decay, but in a leaf corral even they turn into rich compost in less than a year if they are moist. 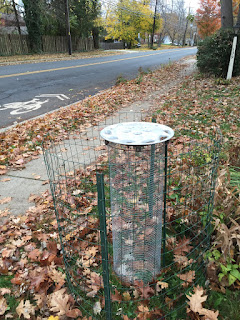 I have two designs thus far. One is a regular leaf corral, with a couple stakes and a length of 3 or 4 foot high green fencing wrapped in a circle. The fencing is nearly invisible in the garden, so blends very well.

The other is something of an innovation that serves a dual purpose. To the regular leaf corral is added a central cylinder made of critter-proof hardware cloth. Into the central cylinder go vegetable scraps from the kitchen. Leaves go in the rest of the corral, so the foodscraps are completely hidden by the surrounding leaves. 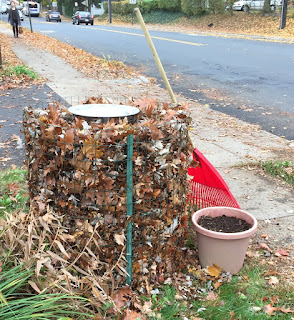 A friend walking by happened to have a banana peel, and contributed it to the central food scrap column. A hubcap looks unexpectedly classy and sun-disk-like as a lid. A sundial of the right size would make a good lid, too, and speaks to the potential for leaf corrals to become sculptural elements in the urban landscape. The 20 pounds of leaf compost in the flower pot there were harvested from another leaf corral filled in spring and left untended until this fall. No turning necessary.

In Princeton, the widespread use of leaf corrals could have major positive implications for our ability to fund acquisition and maintenance of open space preserves. The town spends an estimated $800,000 each year to pick up loose leaves and brush from the streets. Some of that money may be coming from Princeton's open space funding (more on this later). We need to show that leaves can easily be accommodated in the yard, at no cost to the municipality.

Leaf corrals can be easily hidden in a backyard corner, but if integrated into the front yard landscaping, they show neighbors and the community that leaves should be treated as a gift to our yards, and not something to be hauled away.

Some tips for using the Wishing (the Earth) Well: