A Tipi Sprouts in Princeton 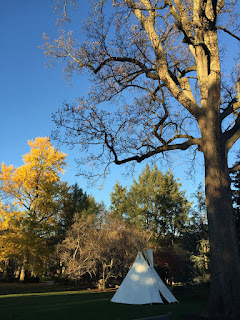 Where are we? Camping in our tipi under a giant cottonwood next to the Little Bighorn River in Montana? 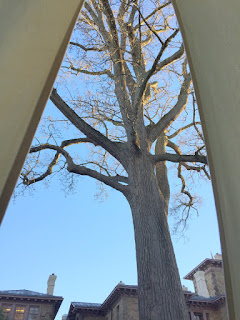 The tree's big enough to date back to when American Indians still roamed freely across the Great Plains, but it's a tulip poplar--an eastern species--and that skyline behind it is not exactly the Rocky Mountains. We're actually on Princeton University campus during November, which President George H.W. Bush in 1990 proclaimed to be National American Indian Heritage Month, also known as Native American Heritage Month (I notice that the museum in Washington, DC is called the National Museum of the American Indian, so am going with that terminology). 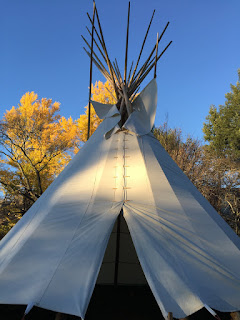 In recognition thereof, according to a facebook page dedicated to the event, two members of the Apsaalooke tribe of Montana raised the tipi earlier in the month, with help from a grounds crew and students. The event included a talk "about the significance of the tipi to the Plains Indian and how it is used in a modern context.", as well as "the Native significance of Prospect House and the University in general." The event was co-sponsored by the Natives at Princeton and the Carl A. Field Center.

A tipi is one of my all-time favorite structures in the world, elegant in look and function, portable but comfortable enough for long stays. I built one once out of three old tents and some young trees stripped of their bark, while working at Camp Innisfree overlooking Lake Michigan in the 1970s. You see those poles that angle up along the outside? Those control the flaps for the hole at the top, where the smoke escapes. The flaps can be adjusted for wind direction, and closed if it starts to rain.

A tipi marries the indoors and the outdoors, a protective enclosure with the romance of a campfire and a view of the stars. Anyone who has sat around a campfire knows that the wind can continuously shift, making the smoke hard to avoid. But there's no wind inside a tipi, so the fire built in the middle of it can be better enjoyed. At night, seen from the outside, a tipi with a fire inside glows like a chinese lantern, casting shadows of the occupants on the walls, like shadow puppets. 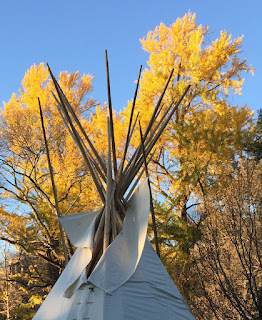 The circle of poles rising above a tipi appears allied to the trees nearby, in this case a gingko tree in full autumn color. 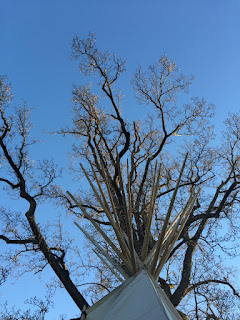 I suspect that tipis began as a bunch of poles leaned against a tree, like you see kids make in the woods. Then, with the bison of the great, treeless plains beckoning, someone figured out that the tree wasn't necessary if all the poles are set just right. 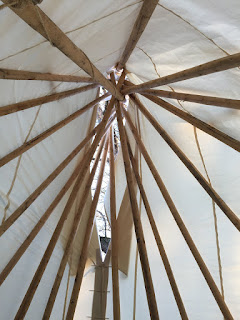 There is so much that is fortuitous about a tipi's design. When I lived in one, first in Michigan and then briefly near Black Duck, Minnesota, I would be lying in my sleeping bag, gazing up at this wonderful confluence, and the sky beyond. What better way to represent the closely knit community of tribal living, with each person an individual and yet tightly linked, playing a vital role in something larger than oneself. Take one pole away, and the structure begins to weaken. 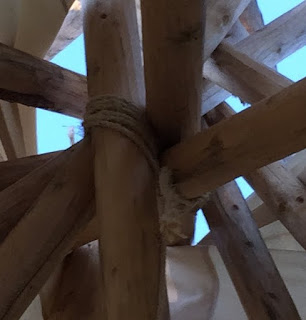 The tipi on campus has a basic frame composed of four poles tied firmly together with rope, which I recalled from my 1970s tipi book means it's of Crow origin. The design for my tipi had a three pole frame--a Sioux design. Turns out that "Crow" is an outdated term for Apsáalooke. 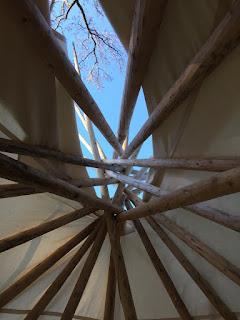 So the four pole core is raised and set in place, and then all but one of the individual poles are added, like the ribs of a whale, making this matrix. The long rope that tied the first four poles together is then wrapped around the poles, to hold them tightly together. 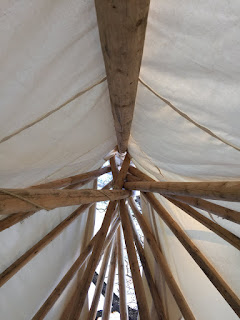 The fabric is tied to the last and largest pole, and that pole is then raised up and set in place on the backside of the tipi. (the pole at the top in this photo) 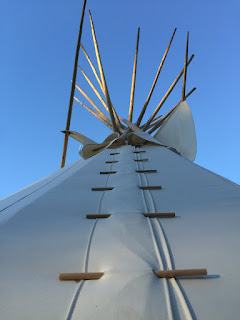 Then the fabric is wrapped around the framework and tied in front, not unlike clothing that buttons up in front. Is a tipi symbolic of a tree, or a tribe, or a person, or all three? 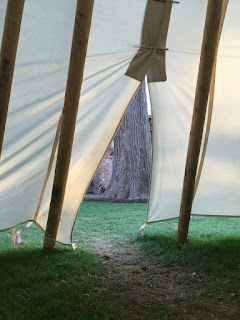 I like this view of the giant tulip poplar out the front door, 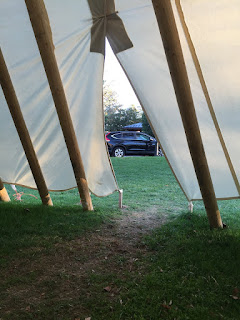 though a SUV or pickup truck might be a more common site now, wherever tipis are used. Notice that the fabric is stretched into place with stakes. When I first made a tipi, I didn't bother with putting many stakes in. Then I was sleeping in it one night and a big storm blew in across our bluff overlooking Lake Michigan. I was lying there all cozy, as the winds howled and the rain pelted down, congratulating myself on how dry the tipi was keeping me even in such a phenomenal downpour, when a big, blustery gust came and ripped my paltry staking out of the ground. The tipi pivoted, the back poles flew up and over my head, and my protective enclosure vanished from above me in an instant, as if setting sail in the darkness. One moment, comfortable and dry, the next, completely exposed and drenched to the bone.

I made haste to the farmhouse nearby, and sat in the living room for awhile, not sure what to do at 3 in the morning. A book lay on the table, which turned out to be the story of the Cherokee's forced march from their beloved Carolina to a bleak exile in Oklahoma. I learned of the Trail of Tears as water dripped from my hair, my own forced eviction adding an extra layer of meaning to a sad chapter in American history.

My tipi survived its short flight in the night, to rise again the next day, with better staking. And it's good to see this most elegant and practical design-for-the-ages grace the Princeton campus, even if only for a month.
Posted by Steve Hiltner at Tuesday, November 24, 2015