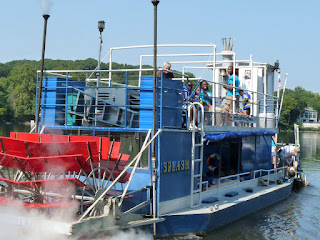 There's a most improbable coming together of nature and culture, environment and history, on the shores of the Delaware River. Docked in Lambertville, NJ, a short drive from Princeton, it's a steamboat called SPLASH, one of the more serendipitous acronyms to ply the placid waters of a mighty river. SPLASH is short for Student Participation in Learning Aquatic Science and History, and the boat itself is a 40 foot version of steamboats that once stretched to 300 feet in their heyday in the 19th century. 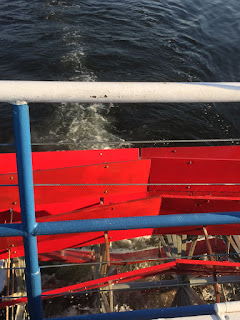 All the splashing water is in the stern, where an authentic and fully functional paddlewheel propels the boat forward, but as a fully functional steamboat, the vessel and its mission make quite a splash on the Delaware River scene. 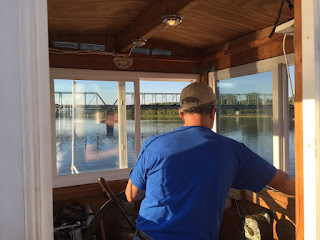 I can identify with this boat. It has midwestern roots, came of age in Ohio in the 1970s, went through a number of metamorphoses while casting about for a purpose in life, and finally found meaning doing environmental work in New Jersey. 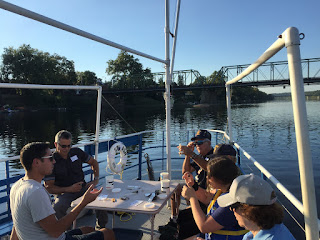 Offering rides for school groups or private events, it was in full environmental mode when I took a ride at the invitation of Eric Clark. One of the "floating classrooms" is in the bow, where we scooped up some river water and tested its quality. 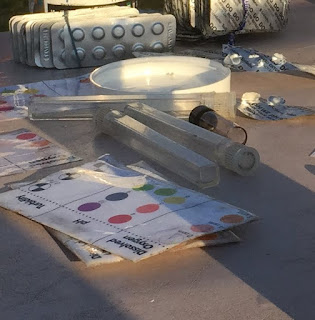 Pour some water in a test-tube, add a drop or two of diagnostic solution, and match the resulting color to colors on a chart. I forget the numbers we ascribed to the water that day, but the overall sentiment was "not bad". 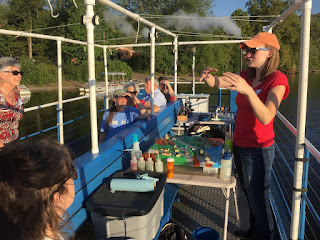 Meanwhile, upstairs Kelsey McNeely was describing how she uses an Enviroscape to teach kids about how rivers receive pollution from streets and chemically treated lawns. 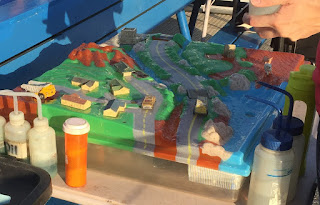 Squirt bottles of colored water represent the different sorts of nonpoint pollution that flow, silently and usually unnoticed, downhill into the Delaware. The rain we view as a cleansing of the cityscape is experienced by the fish and other aquatic life as a pulse of pollution. Hardly seems fair. Kelsey offered suggestions of how to reduce the pollution towns generate. 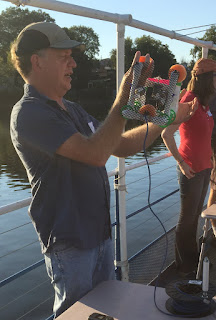 Since the steamboat is called "America's first great invention", it was appropriate to have educator and inventor Brian Patton displaying robots made by some of his students, with some of the parts constructed using 3-D printers. 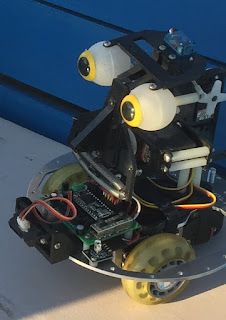 The cleverness that goes into making these robots was also applied to Brian's Midget MG, a tiny sports car that he and his students converted to electric after a rod in the engine broke. Its bank of lead acid batteries has enough range to dependably get him around Lambertville. 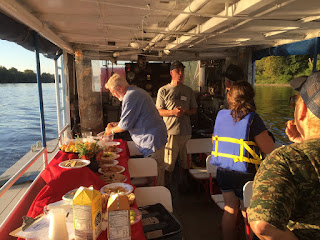 Take some steps down to the third classroom to journey back a couple hundred years to the beginnings of the steamboat era. Food was provided, lest we run out of steam during our time travels. Engineer Pete Burns explained the workings of the steamboat while he tweaked the controls to keep the boat running smoothly. 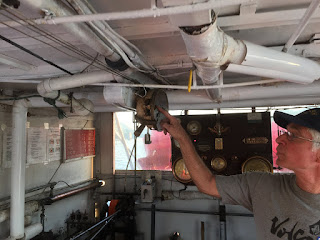 Seems to me paddleboats marked a pivotal point in our relationship to nature. Prior to the steamboat's invention, the paddlewheel had harnessed water power to drive the machinery in watermills. In a steamboat, a machine drives the paddlewheel which in turn moves the water. 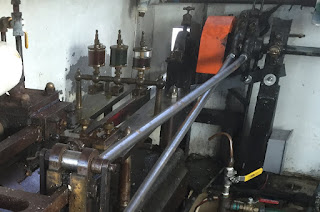 Along with the fragrance of well-oiled metal, there's a Rube Goldberg quality to the elaborate sequence of rods, joints and dials that make the steamboat work. Those cups of oil in the upper left marked a big step forward in steamboat technology. Invented by Elijah McCoy, son of fugitive slaves who had escaped to Canada before returning to the U.S., the cups automatically dripped oil onto moving parts, greatly reducing the maintenance required to keep steamboats running. McCoy was a prolific inventor who made his home in Ypsilanti, Michigan, which by coincidence is where my older daughter was born.

Some internet searches later on revealed how deeply connected the invention of steamboats is to the Delaware River and the birth of our nation. The steamboat era is said to have begun in 1787 when the first successful trial took place in Philadelphia, viewed by members of the U.S. Constitutional Convention.

There is an incredible backstory to this boat now known as SPLASH. Once called the "Shawnee Princess", the boat was abandoned in the 1990s and became a home for critters in an Ohio park, when a Princeton University psychology professor named Bert Hoebel tracked her down. Overcoming what for less passionate people would have been insurmountable problems of transport, he was able to bring the deteriorated remains of the boat to New Jersey, where it underwent a total rehabilitation, funded in part by money raised by preserving his farm through the sale of development rights. Six years and nearly $200,000 later, Hoebel's dream was realized when SPLASH was launched in 2004. Though Hoebel died in 2011, his vision continues through the nonprofit Steamboat Floating Classroom. 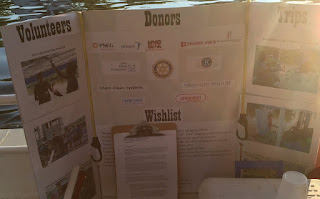 Like all nonprofits, they need volunteers, donors and support. Though the boat goes into hibernation during the winter, their website offers lots of info, including a fuller telling of the boat's amazing history and rehab.

Beyond the admirable educational mission, there's an authenticity to the boat and to the setting that seeps in during the ride. I grew up on a lake where a vessel called The Lady of the Lake would make the rounds, carrying tourists. It looked like a steamboat, but there was no real steam, and the paddlewheel's rotation was for show, not propulsion. It's a double deception, because the expression, "the real McCoy", comes from the steamboat tradition.

With SPLASH, the authenticity begins with the massive ash tree that stands on the bluff overlooking the dock. The tree looks like it could have witnessed the first steamboats on the Delaware 200 years ago. 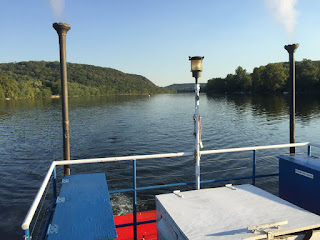 The steam rising from the stern is real. 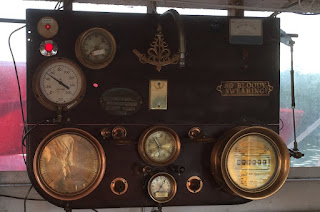 The dials in the engine room all function. 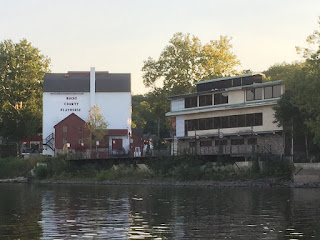 We passed enduring icons like the Bucks County Playhouse, 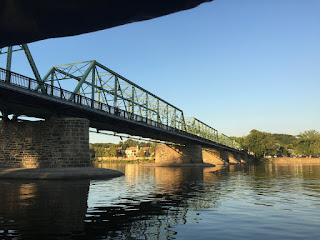 the bridge to New Hope, PA, 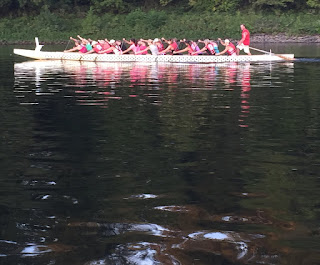 took in some of the river scene, with rowers and dragon boaters honing their skills, and felt above all the influence of the water, which in its easy acquiescence to gravity demonstrates how to relax. My favorite spot on the boat is in the bow, which glides quietly forward just inches above the water, offering endlessly varied reflections and a view of the river bottom. 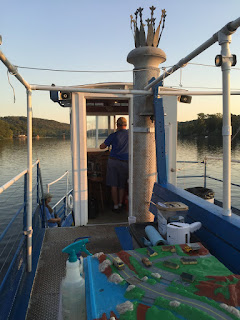 With some nature and culture, education in history and environment, 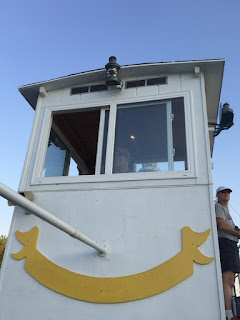 it's all sure to bring a smile.