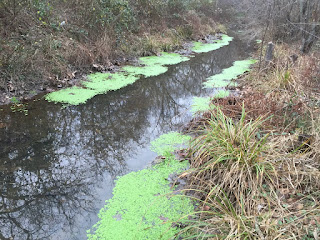 Walk along the edge of Pettoranello Pond, over near Mountain Lakes in Princeton, and you'll see a band of green slowly expanding along the banks. Five years ago, when I first noticed it, my immediate thought was that a new invasive species had arrived. Even though there was only one small patch, about a yard across, it was easy to extrapolate from the present into a future where the pond water's pleasing reflections would disappear beneath a dense mat of green. 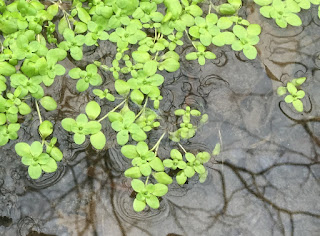 It had stems, so couldn't be duckweed, and was much too small for water lettuce. Google searches yielded nothing similar, which could at least be taken as reassuring that it isn't a widespread menace. With help from Chris Doyle, via Mike Van Clef, we determined that it was water starwort (Callitriche sp.). Seeds would need to be collected later this year to identify the species. Vernal water starwort (C. palustris) is a native species. Pond water starwort (C. stagnalis) was introduced from its native Europe and Africa back in the 19th century, and has been slowly spreading in the U.S. 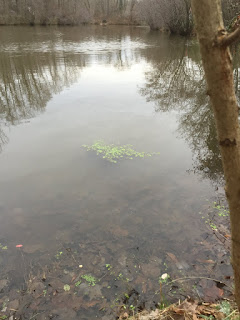 Though it hasn't spread aggressively across the pond, here's an example of where it has moved beyond the edge into more open waters. 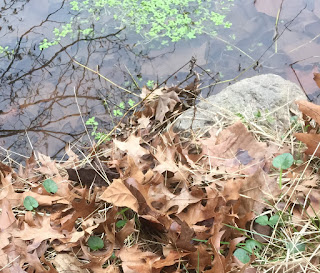 In this photo, you can see the water starwort and, popping up on dry ground, small roundish leaves of the much more aggressive lesser celandine (Ranunculus ficaria) that has become ubiquitous in Pettoranello Gardens and has spread downstream into Mountain Lakes and beyond.
Posted by Steve Hiltner at Wednesday, February 03, 2016