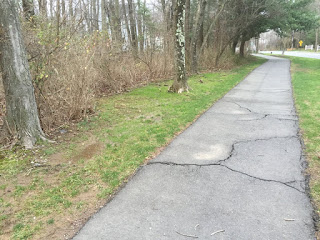 If you encourage people with large wooded lots to simply pile their leaves in the woods, rather than piling them in the street where they become a nuisance, a seemingly simple solution becomes complicated by people's fears that the leaf pile will smother the tree roots beneath it. It does seem logical that a thick layer of matted leaves would prevent water and air from reaching the soil.

But if that's so, then why are tree roots perfectly content to grow underneath bikeways and sidewalks? And why have I found tree roots invading the leaf piles I've made over the years? 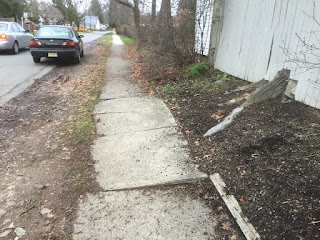 There are a number of answers. One is that water in soil doesn't alway obey gravity. It wicks upwards from below, and seeps sideways. And a wet leaf will transfer moisture to the leaf just beneath it, and so on down through the pile. Worms feasting on the leaves will create passages for water to penetrate more quickly. So the ground under a thick leaf pile will be supplied with water from the sides, below, and even from the top. A leaf pile, by this logic, would actually serve as a feeding station for the trees, rather than a threat. 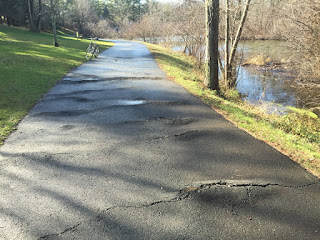 If this makes the survival of tree roots under asphalt and leaf piles more comprehensible, there remains a greater mystery, namely, what impedes the movement of warning signals through the human brain? The asphalt at Pettoranello Gardens has been showing signs of heaving for years, and yet no one thought to cut the roots at the edges, so that they wouldn't continue to push upwards. Incremental, silent change seems to activate the "procrastination ... oops, too late" response. A beautiful path along Pettoranello Pond has been rendered hazardous to the bikes it was built for.

Maybe if people piled their leaves on their own properties, town staff would have more time and funding to maintain our bikeways. Just a thought.