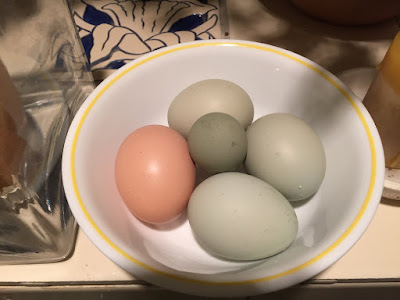 After a few years, chickens and ducks stop laying eggs. Our peking duck laid one egg per day like clockwork for several years, but stopped suddenly this past fall, even though she still waddles about the yard as robustly as ever. Our one hen remaining from the first batch, bought about four years ago, also stopped laying around the same time.

There followed then a lull of about a month, when we finally gave in and bought a dozen eggs at the grocery. Strange feeling after several years of home grown. Then, just as days were narrowing down to winter solstice, the three chickens we bought this past May came online, began their tour of beneficence, or however you'd like to describe the remarkable generosity that is a hen's nature. Though all are araucanas, one lays brown eggs, while the others lay variations on green and blue.

Then one day in late December a tiny egg appeared, as if a quail had happened by for a brief visit. Sometimes that can mean a chicken has just started laying. I wanted to believe the older white hen had found new inspiration. Hard to say, but if one looks closely enough at the greenish eggs, one can see three different shades, with one grayer, one bluer, and one just possibly from an old hen made newer.

Araucanas are sometimes called "easter egg" chickens, because of the varied colors of their eggs, and sometimes when the eggs aren't showing up in the usual spot in or near the coop, we do a good imitation of an Easter egg hunt searching for their new nest. I hear that Araucanas are also particularly resilient in cold weather. That will be tested this weekend, when temperatures are predicted to dip nearly to 0.