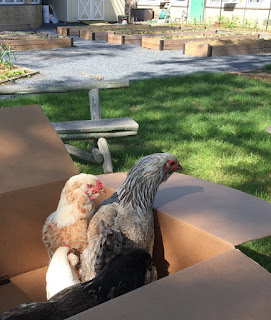 Our four chickens emerged from the box yesterday morning with the realization that they weren't in the backyard anymore. This was new territory, the courtyard of Littlebrook Elementary, and they were about to bring the joys of their charismatic chickenhood to a steady stream of 5-12 year olds as part of Science Day. Each year, Littlebrook has parents and others in the community come on Science Day to share their scientific knowledge with the students in 20 minute bursts at stations located all over the school. 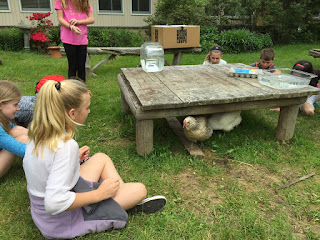 On a day graced by gorgeous weather, the kids came to the courtyard to hear the story of how my daughter, a Littlebrook grad years back, had come home one day from middle school wanting to get chickens. Her parents were not exactly thrilled with the idea. My one experience with caring for birds had been an ill-fated attempt, as a kid, to save an injured robin. I had concluded that birds were mysterious creatures whose needs I could never understand nor provide for other than through restoring habitat. My daughter persisted, however, and we finally made a springtime trip out to Rosedale Mills to buy two-week old Araucana chicks.

After graduating from bathtub to backyard and quickly growing to adulthood, they started laying eggs in the fall. Over the ensuing four years, the chickens have proven to be wonderful, healthy, resourceful, even soulful "pets-with-benefits", requiring little more than food, water, and a homemade coop to provide shelter at night. This year, they and the resident duck have been discovered by neighborhood kids, who peer at them through the fence from little Potts Park on Tee-Ar Street just behind our house. The trip to Littlebrook was their first road gig. 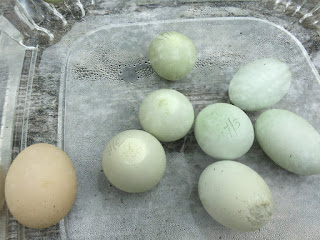 After the kids had spent some time following the chickens around the courtyard, we regathered at the table to look at the unusual colors of the Araucana's "Easter Eggs", and see how one can roughly tell the age of an egg. If it drops to the bottom of a pan of water and lays flat, it's fresh. If it stand upright, with one end lighter than the other, then it's been around for awhile. Liquid slowly escapes through the shell over time, to be replaced by air that makes the egg more buoyant. The older eggs are good for hard-boiling, since the air inside makes them easier to peel. 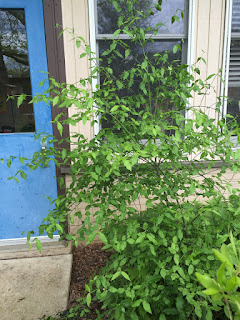 Occasional breaks offered some time to botanize in the well-kept courtyard, which is used for art classes and growing food and native plants. One special native is the native strawberry bush (Euonymus americana), which is so loved by deer it can only grow large and full like this in protected yards in town. 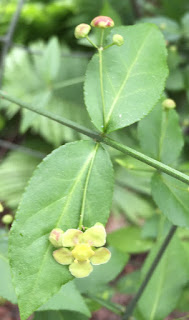 Like the nonnative winged Euonymus, which the deer don't much like and so out-competes the natives in our preserves, the native has barely noticeable flowers. The "strawberries" come later, in the form of bright red, ornamental seeds that give the native shrub the name "hearts a' bustin'". At some point, when nature's checks and balances are restored and our forests come back into more ecological balance, the native Euonymus will thrive once again in our woodlands. Until then, backyards and school courtyards make a fine refuge. 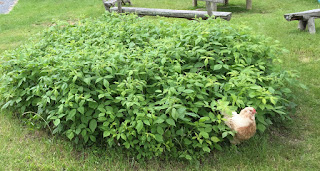 There was considerable uncertainty as to how we'd get the chickens back into the box at the end of the day. When the last class departed, some chicken chasing ensued. One proved very hard to catch, as it would dart away and flap its wings at the very instant we tried to wrap our hands around it. Students watched from their classrooms, highly amused as three of us chased the chicken around the courtyard, clearly outmatched by this speedy descendant of dinosaurs. Good thing that I had planted this patch of raspberries years back as a Littlebrook parent volunteer. We managed to corral the chicken in the raspberry patch, where the foliage was dense enough that the chicken could not see my hands descending from above.

Have to say how good it felt to be back at Littlebrook, where principal Annie Kosek has cultivated over the years a wonderful staff and spirit of learning. Martha Friend, whose depth of caring extends beyond the school and into the community, teaches science, and Jenny Ludmer and all the other Science Day organizers had everything running smoothly. Thanks to Jenny's son, who has chickens at home, for providing critical assistance with the end of the day roundup.
Posted by Steve Hiltner at Friday, May 20, 2016