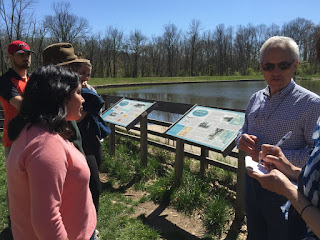 Two weeks have flown since co-leading, with local writer and historian Clifford Zink, a tour of Mountain Lakes for a group of Princeton University students. All are taking a course taught by history professor Vera Candiani, who passionately believes that students need to break out of the academic bubble of campus and get acquainted with the world around them. Much of the university's emphasis in this regard has been to encourage students to study and experience distant continents. But Vera believes there is also a great deal to discover and perspective to be gained just a short walk or ride from campus.

On the premise that we leave our human legacy primarily through our "actions on matter", her students are learning to "'read' the material and landscape record that our species’ interaction with nature over time created." 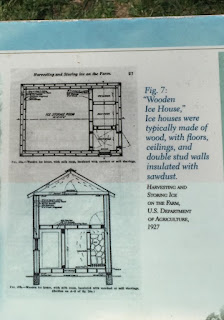 "Actions on matter" at Mountain Lakes could include the double-walled ice houses built to store ice harvested from the lakes in the early decades of the 20th century. Or the pastures and plowed fields that had such a big impact on what plants grow there now, long after the fields grew up in trees. 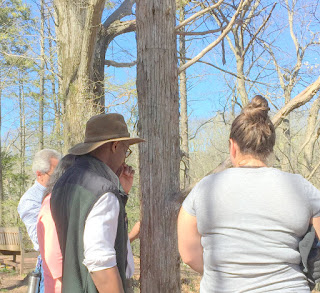 While Clifford spoke about the dams and their restoration, I introduced the students to the aromas of spicebush and eastern red cedar, and explained how to crack the color codes of spring. A quick survey of red maples in the forest can be done by looking for the red hue they cast in spring, and woody species that evolved on other continents and climates can often be spotted as they green up earlier than most native shrubs and trees. This early greening can impact other species by preventing the spring ephemeral wildflowers beneath them from collecting enough solar energy to prepare for the following year. What looks like lush, healthy green, then, may actually be throwing a wrench in the ecological functioning of the landscape. 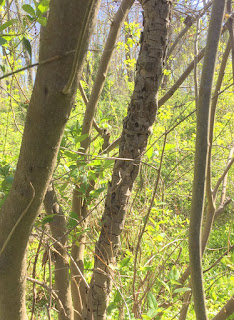 The students learned also to "read" the history of deer management in the growth pattern of a spicebush. I explained how the spicebush, now thriving in the preserve, had just 15 years ago been barely hanging on, as heavy deer browsing pressure prevented any new sprouts from growing up. Many spicebush shrubs held on through that era with only one stem high enough to escape the deer. When the town took action to fill the vital role of the absent wolves and other predators, by culling the deer, the spicebush were able to grow multiple stems up and beyond the reach of the deer. With these new "solar panels" in place, the shrubs quickly abandoned the old one--a once precious lifeline that was no longer needed. The photo shows one of those "heroic" old stems still standing in the middle of all the new ones. 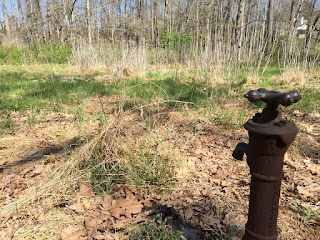 A spigot sticking up in a floodplain meadow near Mountain Lake House hints at the prior existence of an olympic-sized pool, once used by the high school swim team for practices. Back when I worked for Friends of Princeton Open Space, we'd plant Hibiscus and other wildflowers in that field, finding shards of ornamental tile as we dug holes for the new plants. 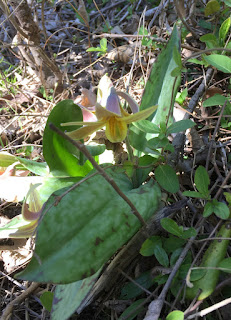 Like pages torn out of what once was an epic poem, we saw a few scattered wildflowers--a trout lily near the path, or a Solomon's Seal hidden beneath a thick patch of winged euonymus. Call it a first step on a long return from the disruptions of the agricultural era a century ago. Though the students saw lots of areas where past plowing and pastures erased the native diversity, they also got to see the few spots that had somehow escaped those historic impacts, where otherwise rare species and lush native herbaceous growth has survived and prospered. 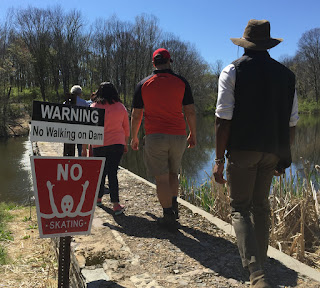 There was a pop quiz midway through to test the students' reading abilities. As Woody Guthrie says about a sign, "On the back side, it didn't say nothing." 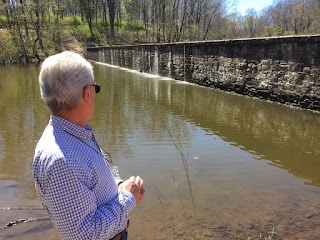 Whenever I see the upper dam, I think of Clifford's insistence that the stone masons restore the dam's spillway to be as level as possible, so that water would spill evenly across its length.

It was a gorgeous day in a beautiful local preserve, with bright, inquisitive students who opened up to the peacefulness of the setting and all the stories it had to tell of past, present, and future, less than a mile from campus.

One idea Professor Candiani has, for expanding this connection of university students to the locale they call home for four years, is to make field trips like this a required part of the freshmen class's orientation, so that students can get to know each other and their new community at the same time.
Posted by Steve Hiltner at Tuesday, May 03, 2016