The Bees in Your Backyard--A talk by Olivia Carril 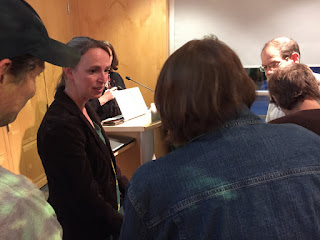 Interesting talk at the Princeton Public Library on bees, by Olivia Carril, co-author of a new book on North American bees called "The Bees in Your Backyard". Most engaging was her clear passion for the subject, which is expansive, given the 4000 species of bees in this part of the world. Each species has its own story, its own special approach to living a bee's life, and new ones are being discovered all the time. Just in the process of doing her doctoral work in Utah, she found 46 new species, and a new species of bee was recently verified in Central Park.

She began with speculation about how bees came into being back in the days of dinosaurs, when primitive magnolia flowers served as the stage where early predatory wasps could evolve into bees that used nectar and pollen for food. Making the transition easier was the similar nutrients content of insects and pollen.

Along with explanations of how to distinguish bees from other insects and from each other, she gave some insights into the myriad lifestyles bees have evolved: where various bees sleep through the night, and the underground preparations for spring.

I asked about how the presence or absence of various species of bees could affect habitat restoration efforts. She said that the first bee species to be lost when habitat is disturbed are the ground-nesting bees and those that are highly specialized and therefore specific about which flowers they pollinate. The specialist pollinators are highly vulnerable when the particular native plant species they've adapted to utilize are lost. Plant species reintroduced to an area after a long absence, and whose specialized pollinators have long since disappeared, will likely still get pollinated, she said, by generalists--bees that pollinate a great variety of flowers.

When asked about what to plant to accommodate the needs of bees, she listed three of the best plant families for attracting bees: sunflower (Composite), mint and pea families. I mentioned the phenomenal insect community (50+ species of insects and spiders) that comes together on our disks of boneset flowers each August, and a woman suggested that narrow-leaved mountain mint, a local wildflower found in meadows, also draws a very diverse insect crowd. Many posts having to do with boneset can be found on this website by typing the word boneset into the search box. Here's an example of the diversity to be found if one looks closely.

Master Gardeners of Mercer County are hosting a June 18 event on bees.
Posted by Steve Hiltner at Saturday, May 21, 2016